Robert Schenkkan's All the Way 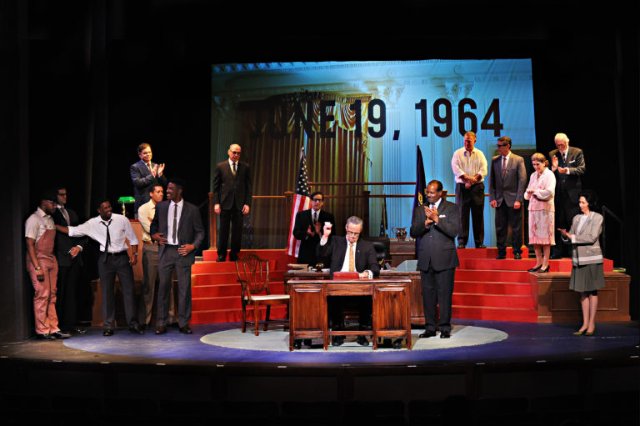 In the Oval Office. Photo by Joyce Goldschmid.

In the twentieth century, no decade cleaved economic life in the United States so dramatically as the 1930s, with an apocalyptic invisible hand arbitrating winners and losers. No decade threatened our way of life and bound us in a unified goal like the 1940s, with an unprecedented mobilization of force and massive disruption of how our economy was run and whose hands made the materiel that supplied those who fought to defend our freedom.

But “The Sixties” resonate most clearly as the decade in which events were not cast upon society, but when society took control of its destiny. Social and political upheaval sped through the land with the most profound changes coming in the civil rights arena. The political driver of the movement was the “accidental president,” Lyndon Baines Johnson. The seminal legislation was the Civil Rights Act of 1964, which would shred precedent in that arena like nothing since the 13th, 14th, and15th Amendments to the Constitution, a century before.

Playwright Robert Schenkkan explores the year from LBJ’s tragic ascension to the presidency through his election in the powerful and fast-paced, Tony Award winning All the Way. Schenkkan reveals a man whose crude persona betrayed a generous and caring heart. Perhaps remembered more for his bullying, his flaws, and his role in the debacle of Vietnam, his principled yet pragmatic sympathies for minorities and the poor produced the most profound flow of progressive legislation in this country’s history. He wanted to do the right thing for all of the people and for the country. But as he knew, the price of his contributions would be a total rewriting of the political map of the country, to the detriment of his own support and that of the Democratic party.

Michael Monagle tackles the many facets of President Lyndon Johnson with gusto. LBJ was a bigger than life figure, and while Monagle doesn’t have the heft, he has the height and reproduces body movements and facial expressions to offer a convincing portrait. The role is highly demanding in the number of lines spoken, the volume and harshness of voice required, and the intensity of a wide range of emotions. The actor rises to the occasion, depicting everything from the president’s gladhanding to his anguish with equal skill.

Perhaps matched only by his fellow Texan and mentor Sam Rayburn, LBJ was as effective a politician as any living person would have observed. He cajoled, threatened, traded favors, and used the power of his office and legislative procedures with consummate skill. But despite rising to the highest office in the land, he suffered physically and emotionally, and we share his pain of feeling isolated and unappreciated. He would always have been considered a bumptious, foul-mouthed oaf by many, but the contrast in succeeding the Camelot-like aura of the Kennedy’s exacerbated the unfortunate distinction.

All the Way introduces a huge number of players in that pivotal year of 1964. We meet the cabal of racist Dixiecrat senators, let by another LBJ mentor, Senator Richard Russell; the key activists in the Civil Rights movement, led by Martin Luther King; the dangerous FBI Director J. Edgar Hoover; and many more. We see a deft exposition of the political machinations that we wish didn’t exist, but that most of us understand must exist.

Palo Alto Players presents a highly effective and entertaining production. Director Peter Allas’s challenge is dizzying, and he acquits himself with highest honors. The action is riveting and suspenseful, and Allas marshals his creative resources to great effect. An incredible number of scenes – seventy-three – fly by. Randy Wong-Westbrook has designed an appealing and versatile set partitioned into distinct functional areas and created an abundance of projections that provide both visual background and critical information. Rick Amerson’s sharp lighting and the director’s use of movement, massing, and every corner of the set add to the dynamism of the staging.

The greatest area for improvement is the acting. A cast of 20 play at least twice as many parts. Overall, performances are adequate, but uneven and not always convincing. When actors play multiple roles, the characters are not always distinctive, though some blame for that may lie with direction. Possibly the acting will improve during the run. On a positive note, even on opening night, the timing and interaction between characters was quite good.

Often one’s perspective on a play derives from prior experience. This reviewer is from the generation that remembers where they were when learning of the assassination of President Kennedy.  Many from that era will know virtually all of the key political players, from Stokely Carmichael to Walter Jenkins to Everett Dirksen, or at least their archetypes. Thus the rapid turnover of scenes and characters can be absorbed by this audience segment because of prior knowledge. The cognitive processing by those less familiar with 1964 would be quite different, and hopefully, those younger audience members will fully benefit from this rewarding theater piece even if some characters, issues, and relationships whiz by and remain murky.

There is a strangely comforting aspect of All the Way. A majority of the country today is distraught with the current presidency, viewing the office holder as a divisive and amoral opportunist who tragically departs from American values and encourages reprehensible behavior. In some sense, the ethnic division facilitated by a self-indulgent president mirrors our loathsome past lasting into the 60s, when large numbers of U.S. Senators and Congressmen exhibited virulent racism and discrimination. We largely overcame that moral travesty. Hopefully, this too will pass. In the words of Dr. Martin Luther King, Jr., “The arc of the moral universe is long, but it bends toward justice.” Meanwhile, this important play provides a valuable reenactment of history and serves lessons that are as important today as they were then.

All the Way by Robert Shenkkan is produced by Palo Alto Players and appears at Lucie Stern Theater, 1305 Middlefield Rd., Palo Alto, CA through November 18, 2018.