Licensing Available for Trilingual Our Town 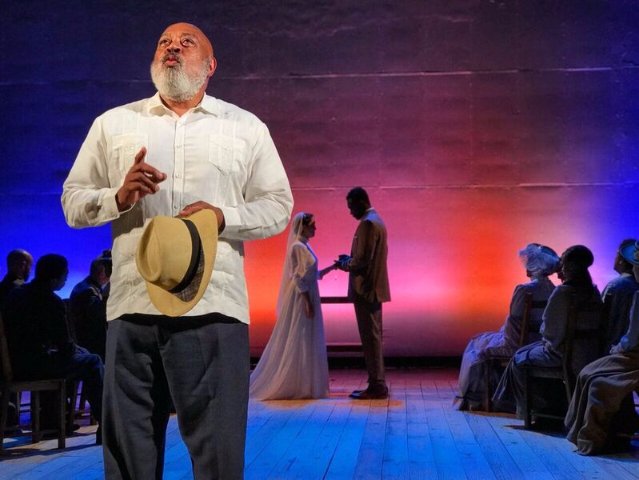 "The goal was to depict a community that truly looked like Our Town. A community of immigrants, divided by language but united by the shared condition of being alive,” Miami New Drama Artistic Director Michel Hausmann told “Playbill” magazine. "We are honored that this vision of a modern-day Grover’s Corners will now have the potential to be shared by a diversity of artists and audiences across America."

Miami New Drama, which is based in Miami Beach, commissioned the new version. Also, the professional theater company staged the world premiere production in November 2017. The planning stage lasted more than a year. And Wilder’s family welcomed Miami New Drama’s production. In fact, the late playwright “conceived Our Town as a universal play about everyone in communities everywhere, and thus a piece of world drama,” A. Tappan Wilder, Thornton’s nephew and literary executor, wrote in the production program. The trilingual adaptation marks the first time in Our Town’s history that the Wilder family approved changes to the play’s text. The piece premiered in 1938.

The adaptation does not change the play’s setting or time period. Rather, the new production adds Spanish and Creole as languages that the characters speak. During scenes featuring these languages, English subtitles appear.

"Infused with layers of culture and community, this new Acting Edition celebrates Grover’s Corners as an international address," according to Concord Theatricals.

But the additions of Spanish and Creole are not the only changes to Wilder’s original script. Normally, a 10-minute intermission occurs between Acts II and III. However, in the multilingual production, audiences join cast members onstage. All are merry, sing, and dance in honor of George and Emily’s wedding.

Our Town takes place in a small New Hampshire town at the turn of the century. Minimal set pieces allow audiences to focus on the daily lives of the town’s residents as they fall in love, marry, and die. The play experienced its world premiere at New Jersey’s McCarter Theater in 1938. It came to Broadway the same year, winning the Pulitzer Prize for drama. In addition to a 1940 film adaptation, there were TV broadcasts in 1995, 1977, 1989, and 2003. Meanwhile, regional and community theaters, as well as school drama groups, have regularly staged Our Town. One of its central messages is that people should fully experience and embrace each moment of life as they're living it.

For information on licensing the multilingual version of Our Town, visit https://www.concordtheatricals.com