From Sardi’s to Broadway 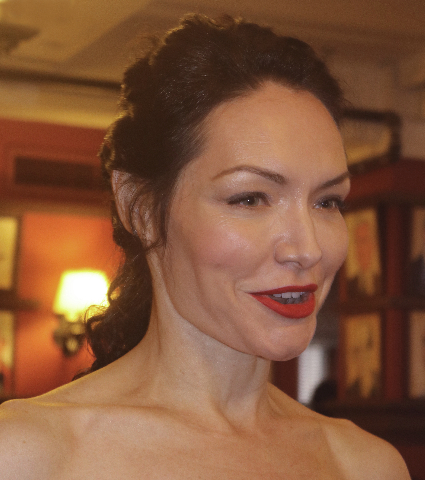 Katrina Lenk stars as the owner of a cafe. Giuliano photos. 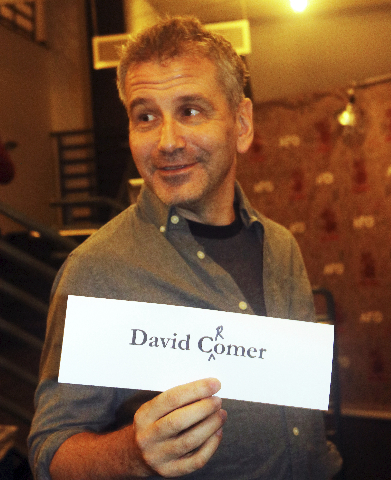 At least spell my name right. 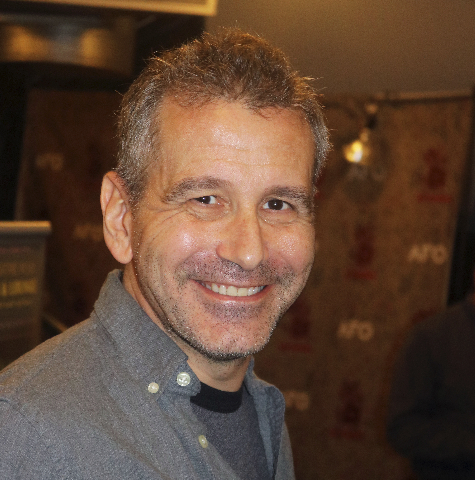 David Cromer directed the Off Broadway and now Broadway productions. 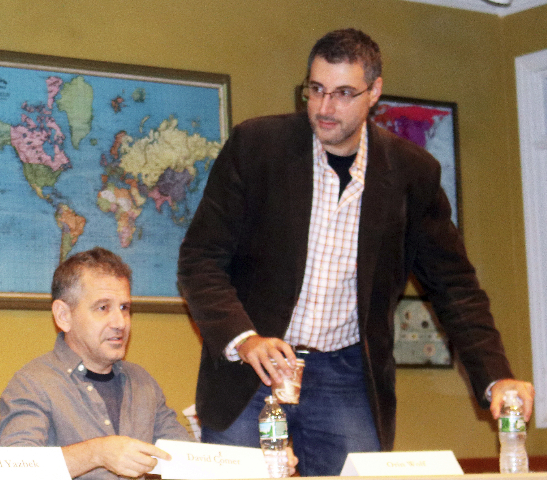 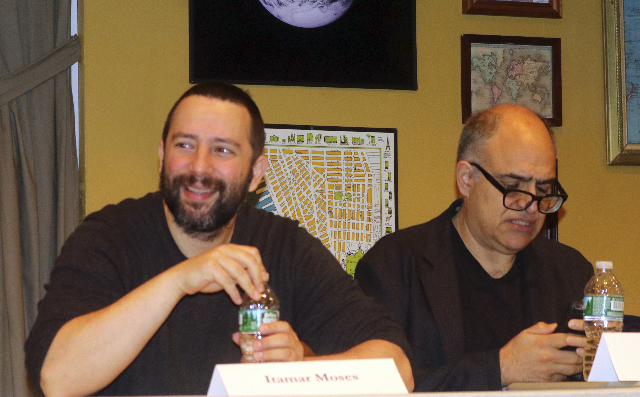 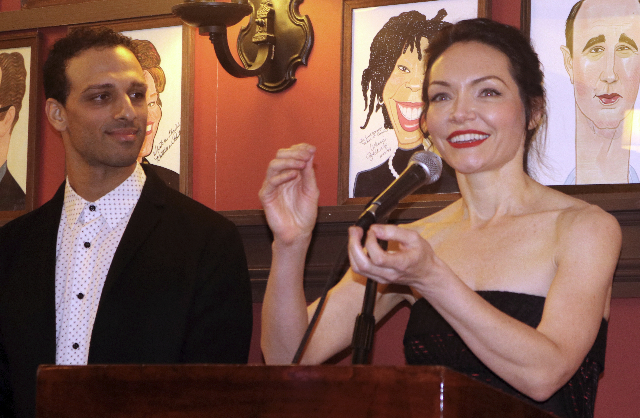 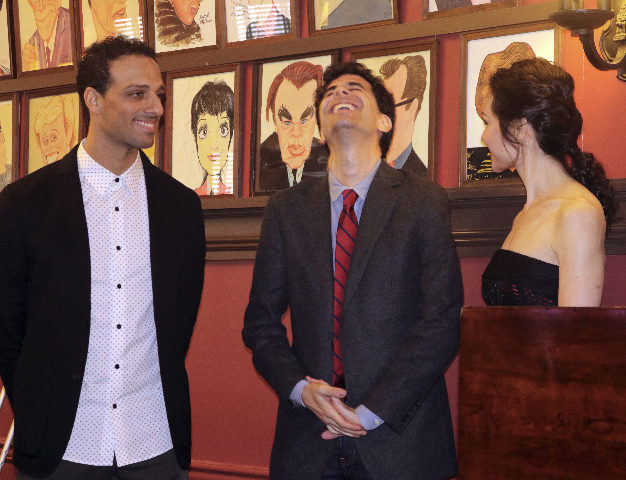 A good laugh from Cariani. 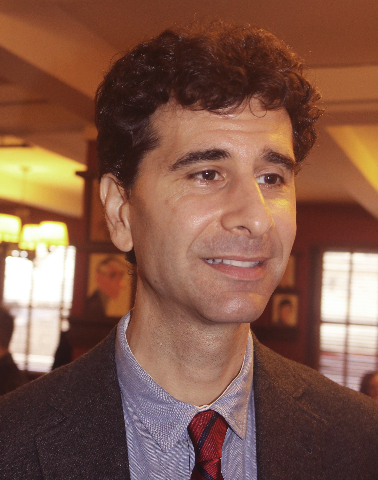 Cariani is familiar to Berkshire audiences from Dancing Lessons at Barrington Stage Company. 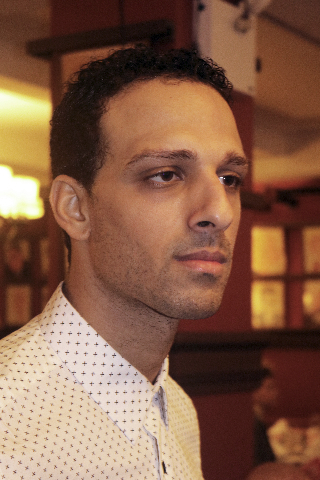 Statchel is the musician player Haled. 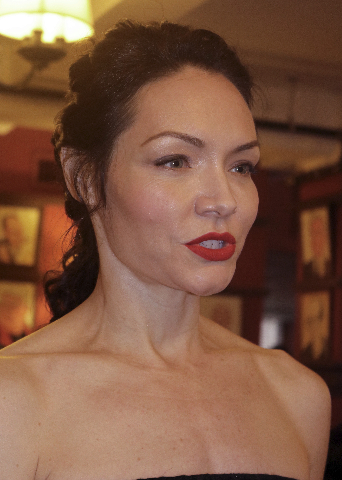 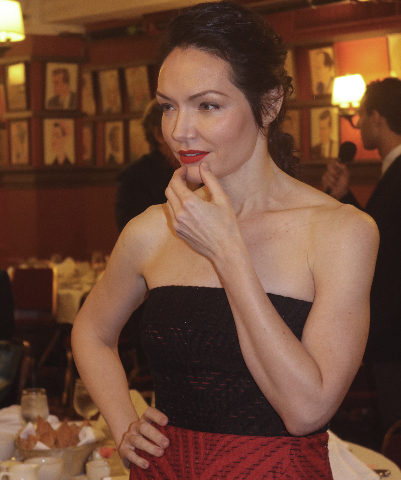 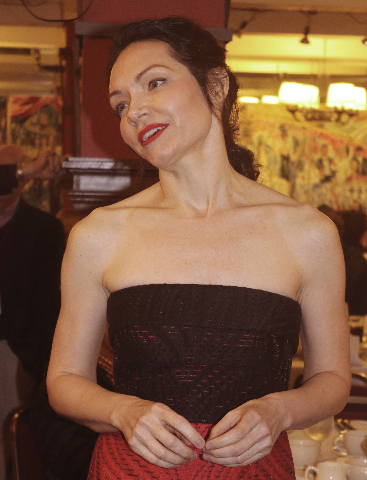 The understated, dark, moody, slowly sensual and at times enervating musical The Band’s Visit which opens tonight at the Ethel Barrymore Theatre is among the most anticipated premieres of the season.

In a prior Off Broadway production at Atlantic Theater Company it enjoyed a rave review in the New York Times which resulted in a sold out run.

Reeking of ennui, frustration,  and sizzling, pent up sexual energy, Karina Lenk as Dina, a café owner in a tiny Israeli village inspired the Times critic to write “With her matter-of-fact sensuality and embattled confidence, she summons the jaded yet sensitive allure of the European film sirens Anouk Aimée and Simone Signoret.”  Adding of the show overall that “There’s not a performance, or a sung note, that feels out of key here…”

Based on the 2007 film by Eran Kolorin the premise is disarmingly simple.

The Alexandria Ceremonial Police Orchestra, consisting of eight men, arrive in Israel from Egypt. They have been booked by an Arab cultural center in Petah Tikva, but through a miscommunication (Arabic has no "p" sound, and regularly replaces it with "b"), the band takes a bus to Beit Hatikva, a fictional town in the middle of the Negev Desert.

The Egyptians encounter a few Israeli townspeople, who respond with curiosity about the band. They provide them with shelter, food, music and companionship during their visit. There is no transportation out of the city that day or hotels. The band members dine at a cafe where the owner, Dina, invites them to stay the night at her apartment, with friends, and in the restaurant.

In the tradition of Aristotle's Poetics the action transpires in the arc of a single day. During the night we glimpse life in the village from frustrations of a couple with a baby living tensely in the home of her father, to a young man parked in front of a public phone which never rings. There are threads of potential romance and jealousy as well as anger over adultery. In the context of a village there are not a lot of options for the young and restless.

If the Broadway reviews mirror those for the prior production the musical is anticipated to be a strong contender during Tony season. The smart money is on Katrina Lenk for a truly stunning and nicely nuanced performance. There is an understated charisma with the leader of the band Tewfig (Tony Shalhoub) a painfully subdued and polite conductor wearing what the locals tease as a Michael Jackson, soft blue uniform.

As their night together slowly unfolds there is the tension  of a possible romance. That comes with a lot of innuendo and flirtation. There appears to be the green light of potential liaison when, with tender detail,  Tewfig reveals the tragic deaths of his son and wife.

When he politely bids her goodnight reflexively she falls into the arms of the musician Haled (Air’el Stachel). He has the corny pickup line of “you have beautiful eyes,” Enough said. He asks everyone he encounters “Do you like Chet Baker?” There is even a chorus of him playing “My Funny Valentine.” Indeed, like Haled, I wondered how many in the audience knew the music of the legendary, junkie jazz musician?

During the NY conference of American Theatre Critics Association we learned about the musical and agonizing years of effort that went into the transitions from screen to stage and then Off Broadway prior to transfer to the intimate Barrymore.

There was a morning session with the producer, Orin Wolf, director, David Cromer, book writer, Itamar Moses, and composer, David Yazbek. On the following day, during the traditional lunch with Broadway stars at Sardi’s, we met Lenk, Stachel and John Cariani who plays, Itzik, a  father in a failing marriage.

A feature of last year's conference was a similar focus on the musical Dear Evan Hansen. That went on to become a Tony winning hit. The panel proved to be so prescient that conference organizers opted again  to  roll the bones.

The Band's Visit  was the hot ticket of the conference but there were fewer comps than delegates. Being on the short end I tried the TKTS booth with no luck then headed to the Barrymore box office. On the queue of ticket holders for the matinee I encountered a scalper and ended up in the mezzanine. Anxious to unload his stash just before showtime I paid just under face value. Once the reviews are out the price will surely be double and triple that. Particularly during busy holiday season.

During the discussion Itamar Moses, the book writer, quipped that when people ask him about the musical he says that "It is just one block north of Hamilton."

From a seat in the mezzanine  I was able to observe the effective use of turntables in the design of Scott Pask. There had been discussion of the set and design during the panel. The film is able to convey the sweeping desolation of the Israeli village in the desert. This was particularly challenging, it seems, in the small space of the prior production at the Atlantic which does not have wings allowing for entrances let alone vistas.

The transfer from one theatre to another also raised the issue of sound levels and amplification. Oddly, the smaller Atlantic was more challenging than the jewel box, acoustical qualities of the magnificently designed Barrymore. Here I am paraphrasing what was said. That sound quality was particularly evident when, as part of curtain calls, the band came back and performed classic Egyptian music. There was a magnificent mix of oud, and Egyptian percussion with a confluence of European strings. Wow! I could have stayed for hours had there been a full concert of that wonderful music.

Other than fine tuning and adapting the dimensions of transfer from a small to larger but still intimate stage there was mimimal transition of the production according to the panel. The director, David Cormer spoke of the delight of working with Lenk who combines a magnifent voice with nuanced acting skills. Up close at Sardi's she proved to be just stunning with a purring, panther like sensuality.

With this production Cromer is likely to add to credits that include Drama Desk, three Obies, three Lortels, four Jeff Awards and a 2010 McArthur Foundation Fellowship.

It was fascinating to learn of the ordeal of producer Orin Wolf to convince the screenwriter Eran Kolirin to sell the rights to the film. It started with a cold call and then lunch. There were difficulties. Kolirin wasn't particularly interested  until Wolf's mentor, Hal Prince, stepped in. Wolf previously produced the Tony winning musical Once as well as nominations for Fiddler on the Roof, Beautiful, Orphans and A View from the Bridge.

Having bought the rights there was the task of assembling a team starting with Moses to adapt the book from the screen play. From there to  transform a film into a musical composed by David Yazbek. His previous  three shows Dirty Rotten Scoundrels, The Full Monty, and Women on the Verge of a Nervous Breakdown earned 24 Tony nominations.

The musical has many highlights including "Welcome to Nowhere" with Dina, Itzik and Papi, several songs for Dina "It Is What It Is" "Omar Sharif" and her plaintive duet with Twefig " Something Different." There is a lot of existential ennui in the music which is brought to the full in the diva renderings of the remarkable Lenk.

To capture the requisite ambiance the team made trips to Israel with a focus on small desert villages.

There is always challenge and risk taking when producing musicals which entail particularly daunting degrees of difficulty. The filmmaker was resistant because he viewed the film as perfect for what he intended. It took convincing  to see it set to music.

With evocative tsuris Wolf recounted the years involved from lunch with the filmmaker to opening the musical on Broadway.

During the funding process, in the equivalent of focus groups, there were concerns that in bringing together Jews and Egyptians there was no element of conflict. How could that be? Which the panelists insisted is precisely the unique “message” of the project.

Instead of greeting the visitors with resentment and hostility the villagers are oddly bemused by the deferential, confused and disoriented lost musicians. As one might say they are more to be pitied than censured.

With a setting in Israel the musical is an apparent shoe in for appealing to an urban audience.

Trust me, however, that this is not Fiddler in the Desert. Don’t expect a resounding chorus of “Tradition.” While set in Israel this isn’t a Jewish musical.

Rather it is a day and night in the life of a small, rural community of any ethnicity where, by ironic serendipity, a band of lost travelers stumble into town. That’s a trope as old as drama itself.

Played right, as is the case with this production, it’s a plot that gets us each and every time. You may well enjoy The Band’s Visit but don’t expect a big, splashy, Broadway musical. In that sense this slow, intimate evening is most notable for what it is not.