A Bronx Tale on Broadway 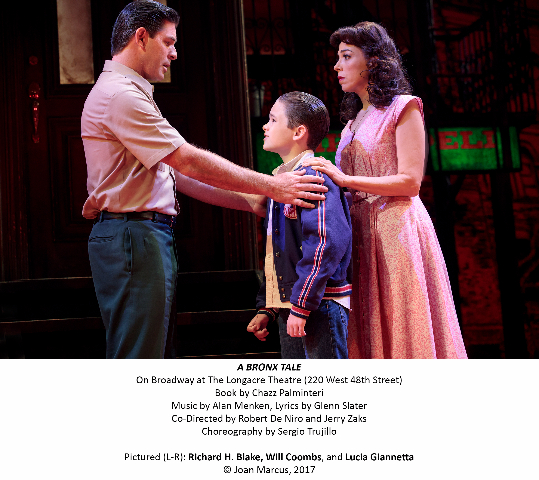 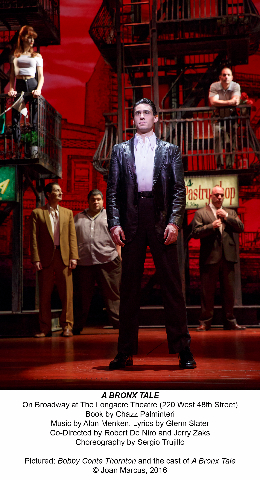 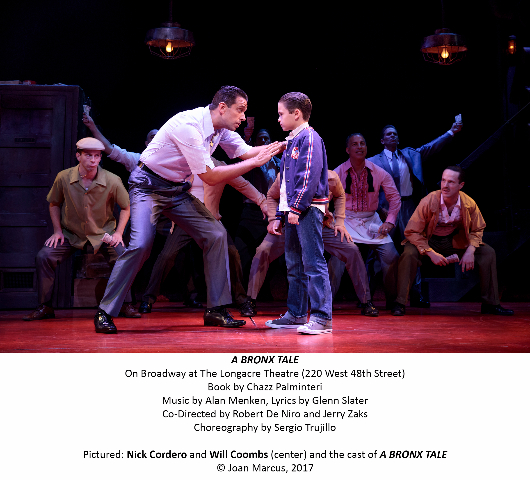 If you're the father of a boy or young man, you can relate to Lorenzo's predicament: You want to instill wholesome, moral values in your son, whom you feel is learning from you. Then he meets and becomes fascinated by a man with violent tendencies, but deep down, a soft heart and wise lessons to teach. Suddenly, the lad seems more drawn to the stranger.

Sonny is such a man.

The nuns who taught him wouldn’t exactly qualify him for sainthood or honor his good character. Yet some people, including often-optimistic, innocent children, can spot goodness where others can’t.

Perhaps this, and Young Calogero’s impressionable mind, can help explain his attraction to the charismatic mobster. He’s among the characters at the center of the bittersweet, humorous, tear-inducing musical, A Bronx Tale, now playing on Broadway.

The sometimes-sentimental stage musical adaptation about love, loyalty and family won’t receive many accolades for its originality; it doesn’t offer much new in the young-man-torn between parental-and-enticing-external-influences genre. Furthermore, its songs by composer Alan Menken (Beauty and the Beast, Little Shop of Horrors, Newsies) and lyricist Glenn Slater (The Little Mermaid, Sister Act) aren't particularly memorable. However, the numbers, some tender, some vibrant, establish the mood of characters and the tone of scenes.

The musicians make sure the audience hears the instruments and singers. They include a barbershop quartet-like group called the “Doo-Wop Guys.” Sam Edgerly, Dominic Nolfi, Cary Tedder and Keith White deserve kudos for singing harmoniously.

The stage musical and its source material (the 1993 film starring Robert De Niro and Chazz Palminteri, as well as Palminteri’s play, based on his life) find relevance in 2017 America. These days, young people receive mixed, often contradictory messages through various media.

It was a time of violence that left a question imprinted in parents’ minds: It’s 10 p.m., do you know where your children are? Riots and other forms of violence around the time set alarm bells off for parents.

Times may have changed, but the question remains, albeit with some rephrasing. It’s 10 p.m., and you know where your children are and what they’re doing: they’re in their room, surfing the Internet. But do you know which website they’re on? Do you know with whom they might be communicating in a chat room?

There’s no mystery as to whom Calogero, first as a child, then as an adult, looks up to and hangs out with. His parents are fully aware their son is heavily influenced by Sonny, whose confidence and charisma attracts people like flies to honey.

Sonny (Nick Cordero) might have a caring soul beneath his gruff exterior. However, Calogero’s parents want wholesome, choir-boy like morals for their son.

It’s easy to become emotionally invested in A Bronx Tale, directed with an equal mixture of sensitivity and spunk by De Niro and Jerry Zaks. Part of the reason is we care about the characters and the show’s themes are relatable.

Your heart goes out to Young Calogero; he’s faced with a frightening moment at a tender age.

In addition, his maturing, developing mind struggles to process values such as loyalty and what it means to be a man.

You won’t find yourself taking sides between Lorenzo and Sonny. Both, in their own way, want good for the youngster, who ages from pre-adolescence to young adulthood through the course of the play.

Dad tries to give his son tender love, as demonstrated in the song “Look to Your Heart.”

It’s sung slowly and with loving care by the older man (a soft-hearted, sometimes exasperated Richard H. Blake), as Lorenzo plays catch with his young son.

A marked contrast exists between “Follow Your Heart” and the fast-paced, dramatic “Roll ‘Em,” which Sunny and his fellow wise guys sing.

In “Follow Your Heart,” Lorenzo urges his son not to buy into shortcuts as he becomes a man.

Yet the boy finds one particular shortcut too tempting to avoid: The Craps game.

A Bronx Tale at times brings to mind a certain musical by Frank Loesser, Jo Swerling and Abe Burrows .

With characters named Tony-Ten-To-Two, Frankie Coffeecake and Crazy Mario, it’s hard not to think about the stylishness of “Guys and Dolls.”

No wonder Young Calogero (a sweet, curiously innocent, star-struck Will Coombs) is fascinated by Sonny and his gang. Coombs, a talented youngster with wonderful stage presence, invests the boy with increasing swagger as the youth begins to feel like one of the gang.

As Calogero’s youth gives way to adulthood, the young man must face the brutal truth, in all its stark nakedness, about life on the Bronx’s mean streets. For the reviewed performance, Edgerly played the adult Calogero. He invested him with charm, enthusiasm, a sense of nostalgia, heartache and palpable inner conflict.

It’s easy to envision Sonny in such a violent show. For all his good qualities, which the immensely talented Cordero nicely conveys, endearing us to him, this is a violent man.

Cross him or his turf at the wrong time at your peril.

Cordero steals the show as Sonny without overshadowing the other characters. His Sonny is tall and imposing -- a bully whose menacing quality is conveyed not just by his thunderous shouting and husky voice. He intimidates by merely walking slowly and confidently up to someone with a no-nonsense expression etched on his face.

This ultimately is Calogero’s story. It’s a tale in which book writer Palminteri captures a specific ambiance with flair. The design team brings to vivid life this stylish, tough and tender tale, one which produces tears and laughter. Scenic designer Beowulf Boritt’s visually-striking set captures a sense of community, its blue collar, gruff character and colorful nature. The set isn't literal, befitting a musical.

Lighting designer Howell Binkley reinforces the bloody violence and romance of the piece, with a predominantly red backdrop. Binkley appropriately tones down the lights, at times, to create a more intimate atmosphere.

The intimate, heartbreaking final scene, in particular, will remind you of the importance of forgiveness and family.

For Calogero--and yes, even his father--Sonny has become part of the family.