Satyagraha by Glass Live in HD 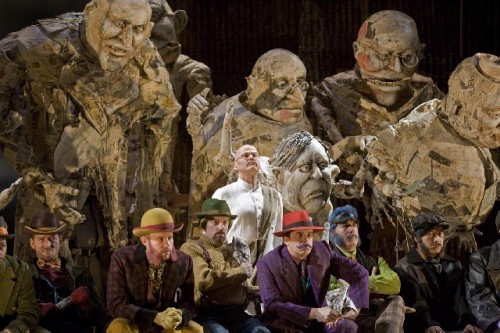 Philip Glass’s twentieth-century masterpiece Satyagraha comes to the Sterling and Francine Clark Art Institute on Saturday, November 19 at 1:00 pm, live in HD from the Metropolitan Opera. Don’t miss this “profound and beautiful work of theater” (Washington Post). Refreshments will be available for purchase during intermission. Tickets are $25 ($18 for members and students) and may be ordered online or by calling 413 458 0MET (458 0638). The box office will also be open one hour before the performance, and the doors will open at 12:30 pm.

The Met: Live in HD 2011-2012 Season continues with Handel’s Rodelinda on December 3; Gounod’s Faust on December 10; The Enchanted Island by Handel, Vivaldi, Rameau, and others on January 21; Wagner’s Götterdämmerung on February 11; Verdi’s Ernani on February 25; Massenet’s Manon on April 7; and Verdi’s La Traviata on April 14. The Clark’s intimate auditorium is one of the best performance venues in the region, with comfortable seating and soaring acoustics. Tickets are $25 ($18 for members and students) and may be ordered online or by calling 413 458 0MET (458 0638).

ACT I (TOLSTOY). Scene 1. The Kuru Field of Justice A great battle is impending between two royal families, the Kuruvas and the Pandavas. At a signal from the king, the trumpeter blows his conch, signaling to the waiting armies assembled on the sacred plain. Warriors and chieftains blow their battle shells announcing their readiness to fight. Seeing the battle set, Prince Arjuna realizes that his relatives and friends fight on both sides. Filled with compassion, he speaks to Lord Krishna and asks him for guidance.

Krishna instructs him to be wise in matters of death and duty: “Hold pleasure and pain, profit and loss, victory and defeat to be the same: then brace yourself for the fight. So will you bring no evil on yourself.” Gandhi enters and draws a parallel between the mythic confrontation and the present one.

Scene 2. Tolstoy Farm (1910) Gandhi has initiated the first collective action among South Africa’s Indian residents. There are only a handful of Satyagrahis pledged to resist the Europeans’ racial discrimination. No one knows how long the struggle will last, but the Satyagrahis progress toward securing an immediate goal with the establishment of Tolstoy Farm.

Here, all families live in one place, becoming members of a cooperative commonwealth, where residents are trained to live a new, simple life in harmony with each other. Everything from building to cooking to scavenging is to be done with their own hands. The building of the farm draws everyone into an active involvement with the Satyagraha ideal—“a fight on the behalf of Truth consisting chiefly in self-purification and self-reliance.”

Weighing the ideas of contemplation and action, Gandhi states his view that work is preferable to idleness, provided one’s motives are freed from the taint of desire: “Between theory and practice, some talk as they were two—making a separation and a difference between them. Yet wise men know that both can be gained in applying oneself whole-heartedly to one.”

Scene 3. The Vow (1906) The British government proposes a legal amendment for complete re-registration and fingerprinting of all Indians—men, women and children. They would be required to carry resident permits at all times, police could enter homes to inspect for certificates, and offenses would be punishable by fines, jail, or deportation. The proposed Black Act becomes the occasion for a large rallying of the community around a specific issue. At a public meeting attended by more than 3,000, a resolution is drawn up stating that all will resist the Act unto death.

Suddenly, the Satyagrahis have come to a turning point. The life and death terms of the resolution call for a step beyond ordinary majority vote, and all in attendance listen to the speakers explain the solemn responsibility of taking the individual pledges. Only a vow taken in the name of God will support an individual’s observance of the resolution in the face of every conceivable hardship, even if he were the only one left. “For nothing on earth resembles wisdom’s power to purify and this a man may find in time within himself, when he is perfected in spiritual exercise… If a work is done because it should be done and is enjoined by Scripture and without thought for great benefits, then that is surrender in Goodness.”

Act II “Tagor e” Scene 1. Confrontation and Rescue (1896) Gandhi has spent six months in India to inform people in his homeland of the settlers’ conditions in South Africa. Thousands of Europeans have read of his speeches and meetings in somewhat exaggerated accounts in South African newspapers, and there is a wave of opposition when Gandhi returns to Durban.

Already angered by the way he has exposed events to the world, the Europeans are further enraged by Gandhi’s intention to bring back hundreds of Indian immigrants. If the government will not prevent them from landing, then the Europeans will take the law into their own hands. Growing larger in numbers and more violent in actions, the excited crowd pursues Gandhi on the long walk through town.

A European supporter, the wife of the superintendent of police, opens her umbrella for Gandhi’s protection and walks by his side, leading him to safety. She declares Gandhi’s opponents fools, corrupted by pride and hypocrisy.

Scene 2. Indian Opinion (1906) The weekly publication of Indian Opinion is central to the Satyagraha movement’s activities, and the paper progressively reflects the growth of its principles. Refusing all advertisement, the publication is freed of any outside influence and becomes the mutual responsibility of those working on the paper and the readers whose subscriptions supply the only source of financial support.

Indian Opinion openly diagnoses the movement’s weaknesses as a means for eradicating them. Though this keeps Gandhi’s adversaries well informed, it more importantly pursues the goal of real strength. Setting a standard with a strong internal policy, Indian Opinion informs the local and world community and becomes a powerful weapon for the struggle.

At its height, there is an estimated readership of 20,000 in South Africa alone. Gandhi’s wife and his associates restate the importance of working for a cause rather than for one’s own gratification. By setting a good example, one inspires and leads others.

Scene 3. Protest (1908) Movement leaders have been sentenced to jail for refusing to leave South Africa. The community resolves to protest by filling up the jail. Getting themselves arrested for various offences, the number of Satyagrahi prisoners rises to 150 within a few days. The government proposes a settlement: if the majority of Indians undergoes voluntary registration, they will repeal the Black Act.

After fulfilling their part of the bargain, the community is stunned to learn that the Black Act is to be put into effect anyway. Ready to resume the struggle, Satyagrahis issue their own ultimatum: if the government will not withdraw the act, Indians will burn their certificates and accept the consequences. On the day of the ultimatum’s expiration, Gandhi learns of the government’s refusal while conducting a prayer meeting before the burning of the registration cards. The certificates are set ablaze. Satyagraha now has its baptism of fire.

Gandhi preaches about the importance of bearing no hate toward anyone: “The Lord said: Let a man feel hatred for no being, let him be friendly, compassionate; done with thoughts of ‘I’ and ‘mine’, the same in pleasure as in pain, long suffering.”

Act III “Ki ng” New Castle March (1913) With two racially discriminatory laws, the government is effectively controlling the influx of new Indian settlers and keeping the old class of indentured laborers under its thumb. Both the Three Pound Tax and the Asiatic Immigration Law are in effect as the great Indian leader, Shree Gokhale, makes a tour of South Africa and secures from the government a public promise for their repeal.

The government’s breach of that promise gives Satyagraha an opportunity to include new objectives in its fight for truth and, in turn, to increase its strength in numbers. The miners in New Castle are selected to be the first drawn into the expanding struggle, and a deputation travels there, organizing a strike in sympathy with the movement. It is also decided that striking miners and their families should leave the homes provided by mine owners and join the Satyagraha army.

Led by Gandhi, they march the thirty-six miles to the Transvaal border. If arrested at this check point, the army of 5,000 would flood the jails, incurring heavy expenses and difficulties for the government. If allowed to proceed to Tolstoy Farm, they would prolong the strike, conceivably drawing all of the 60,000 laborers affected by the tax law into the struggle.

In either event, they would be bringing strong pressure for repeal, all within the dictates of Satyagraha. The army is instructed to stand any test without opposition, and their movements are openly announced to their adversaries—“as an effective protest against the Minister’s breach of pledge and as a pure demonstration of our distress at the loss of self-respect.”

Talking to his followers about the soul’s return to Brahma, Gandhi proclaims: “The Lord said, I have passed through many a birth and many have you, I know them all but you do not. Yet by my creative energy, I consort with Nature and come to be in time. For whenever the law of righteousness withers away and lawlessness arises, then do I generate myself on earth. I come into being age after age and take a visible shape and move a man with men for the protection of good, thrusting the evil back and setting virtue on her seat again.”