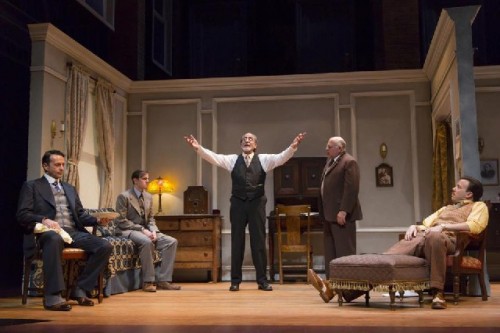 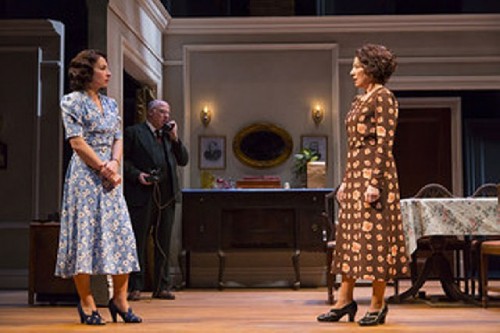 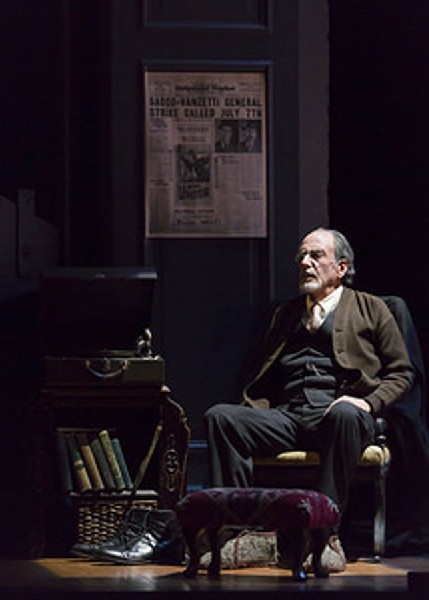 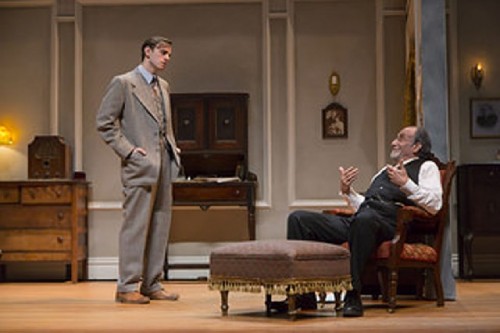 Michael Goldsmith and Will LeBow 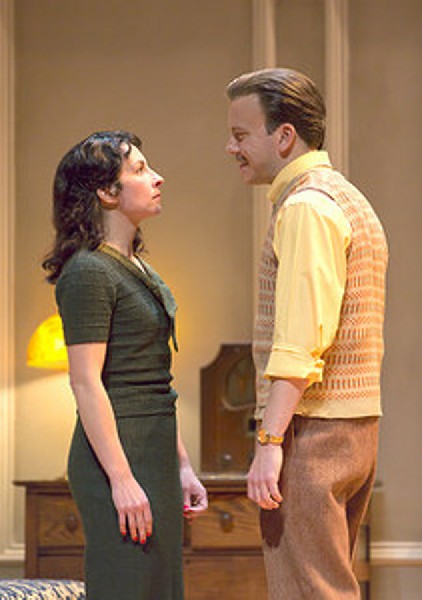 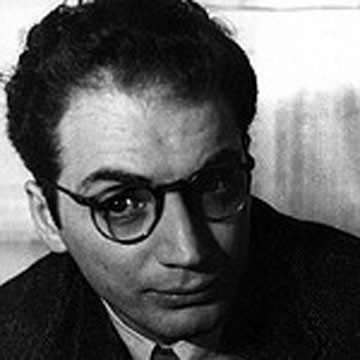 Set in a crowded tenement apartment in the Bronx in 1935-36 and taking its title from a hopeful Biblical quote from Isaiah 26:19, Awake and Sing! by Clifford Odets is a play about The Depression and depressed people. Though seemingly about a secular working class, three generation Jewish family, it is actually about any dysfunctional American family of similar means and unfulfilled aspirations. Even set 80 years ago and with dated jargon, there is a contemporary echo to this story about the American Dream turned nightmare.

With wonderful acting, each character in this Huntington Theatre Company production is not just a specific type but an individual wrestling with their own devils or angels. The characterizations express how not making good decisions and resisting positive change cause personal pain and suffering. Here, optimistic ideals clash with broken realities, hope versus resignation.

The demonstrable theme of Awake and Sing! is the very human dilemma of wrongly not pursuing your heart. This was non-action with bitter consequences.

Playwright Odets leftist leanings are underscored by the Berger family's ordeals. My late father would have called Odets' politics Pinko, but they were certainly of a time and a place popular with many. The Director Melia Bensussen has wonderfully choreographed the actors to portray visibly their strain and frustration to their circumstances, both familial and economic. Their silences are often louder than their words.

The most charismatic character is Jake, the grandfather. Played superbly by Will LeBow, this is a tour de force performance. He morphs the grumpy old Marxist as a strident revolutionary against the capitalist elite while being hardest on himself for not acting on his own principles. LeBow's Jake is simply wonderful at the center of this drama.

There are other strong performances as well. With a moral compass seemingly broken and at times totally ruthless, Lori Wilner's holding everything together matriarch Bessie, a constantly exasperated Jake's middle age daughter, is all about survival by any means. With an iron hand that occasionally slips, she rules the roost of her befuddled, puppy dog-like husband, Myron Berger (played naturally and empathetically by David Wohl), her contrary daughter Hennie (played by Annie Purcell with a frustrated dignity) and her totally unfulfilled, hurt and angry early 20s son Ralph (played with building intensity by Michael Goldsmith).

Unlikable at best, Bessie's actions often lead to unexpected negative results. She marries Hennie off to a recent immigrant that Hennie does not love, Sam (played with humor and empathy by Nael Nacer). She bulldozes her father Jake, subjugates husband Myron and seems to have historically defeated son Ralph's youthful aspirations, who still sleeps on a pullout bed in the family living room.

Rounding out the problematic family, Jake's son and Bessie's brother Uncle Morty (played by Stephen Schnetzer with just enough businessman's arrogance and contempt for Jake's politics). Notably, Jake loves his opera records and his children, but his grandson Ralph the most. Bickering Bergers punctuate the narrative.

The character that serves as a partial Greek chorus and counterbalance to the family turmoil is the boarder Moe Axelrod, played with a wonderful rough hewn slyness and 30s jive talk by Eric T. Miller. He is a shrewd slickster, gambler, bookie and someone who plays by his own rules. A WWI cynical army vet who lost his leg, Moe's presence grows as the drama develops. Though damaged, his spirit is one of prevailing over problems. Taking what he has been dealt in life, his is the creative and nuanced if not a bit twisted search for the American Dream.

The Huntington's stagecraft is always exemplary. Scenic Designer James Noone's staging of Awake and Sing! is wonderful displaying the huge height of the beehive apartment setting of the claustrophobic but very neat overcrowded Berger family apartment and the energetic subway station. The costume design by Michael Krass reinforces period dress and style. Lighting by Brian J. Lillenthal adds perspective to the space while the sound by Rob Milburn & Michael Bodeen adds a realistic dimension to the narrative.

With a superb ensemble cast and dramatically inspired sets, the Huntington's Awake and Sing! is a play about aspirations-- aspirations dreamed, unfulfilled and frustrated. As the title suggests, there is always a bit of hope. Visually and symbolically, the apartment set underscores the cramped, frustrating environment of the drama, while the soaring height of the Bronx apartment complex and the speed and energy of the subway station speak to a way to escape and to perhaps awake and even sing.