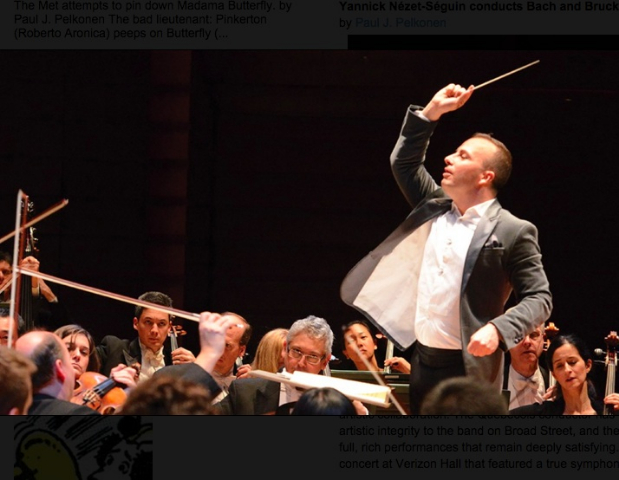 Neet-Seguin Conducts the Philadelphia Orchestra
The Philadelphia Orchestra's relationship with music director Yannick Nézet-Séguin is a model of modern artistic collaboration. The Quebecois conductor has brought a much-needed dose of enthusiasm and artistic integrity to the band on Broad Street, and the orchestra has responded according to its gifts with full, rich performances that remain deeply satisfying. One of those took place on Friday afternoon, in a concert at Verizon Hall that featured a true symphonic heavyweight: Anton Bruckner's Symphony No. 8.

The Bruckner Eighth is one of the longest symphonies in the standard repertory. Though just four movements, its sheer weight and size make it difficult to program alongside another work. Nézet-Séguin tried however, placing it next to Bach's Violin Concerto No. 2 with Philly concertmaster David Kim as the soloist. There is a relationship between Bach's complex counterpoint and Bruckner's antiphonal writing for choirs of winds and brass. Perhaps highlighting this was Yannick Nézet-Séguin's point.The Bach work sounded great in the woody acoustic of Verizon Hall. Kim's violin sang its elegant little melodies over the complex accompaniment and the orchestra players relished delving into the intricacies of the three movements. Nézet-Séguin showed his strength in baroque style, leading a performance that was neither willfully slow nor ridiculously fast. This was all about striking the balance and letting the talents of Kim display to their fullest advantage.

Bruckner was never satisfied with his Eighth. Conceived on an enormous plan and incorporating the largest orchestra for one of his symphonies. The arsenal is stocked with triple wind, eight horns and a quartet of Wagner tubas. The composer, nearing the end of his life and plagued by doubt, revised the work again and again, to the point where there are two very different extant versions (1887 and 1890) and three different editions of the score that use a hybrid of the two. For trainspotters. Nézet-Séguin used the 1939 version by Robert Haas, which is the more popular and frequently recorded version of the piece.

This work attempts to confront the very nature of man's relationship with God. The battle starts (as every Bruckner symphony does) with a tremolo in the low strings. A theme is introduced, stopped, repeated and answered with another theme that also repeats. And then the huge wave of sound rolls over the listener as Bruckner's main thematic idea stands revealed in all of its glory. That was the effect that Nézet-Séguin produced in the opening of the first movement. He also underlined the doubt and self-examination that is endemic to this work with a profound tragic character coming to the fore.

The scherzo followed, stomping and whirling through the plodding Austrian rhythm that Bruckner used obsessively in almost all of his symphonies. Some eloquent playing in the trio section (with some lovely work from the strings and winds) yielded to another assault on the senses. This cleared the way for the profound slow movement, (in C Major as per the original Haas edition) with its rising, yearning horn-call at its center. In this profound and solemn moment, it is as if Bruckner, atop his newly constructed cathedral of sound, was reaching upward to touch the very face of God.

The finale is a complex commentary on what has gone before, underpinned by a pounding timpani rhythm that strikes throughout the long movement. Nézet-Séguin showed command over the three alternating thematic subjects, changing tempos from memory and cuing sections of players as if they were the stops on a great celestial organ. The whole rose to a mighty climax as the themes from the first three movements returned, with Bruckner teetering in the musical balance until the orchestra overwhelmingly charged into the bright home key of C Major. It was a long journey but the rewards were glorious indeed.