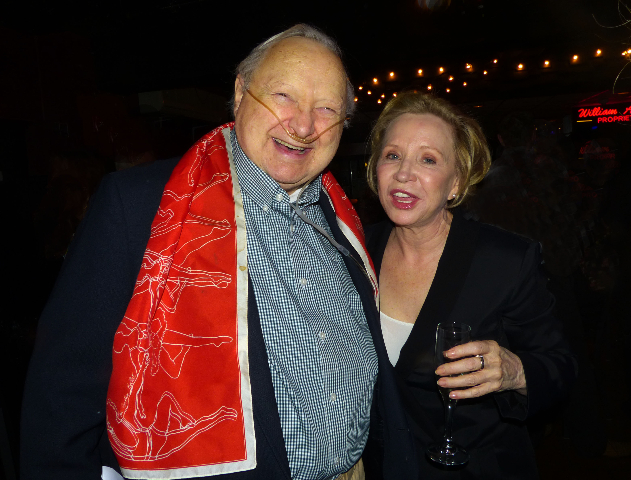 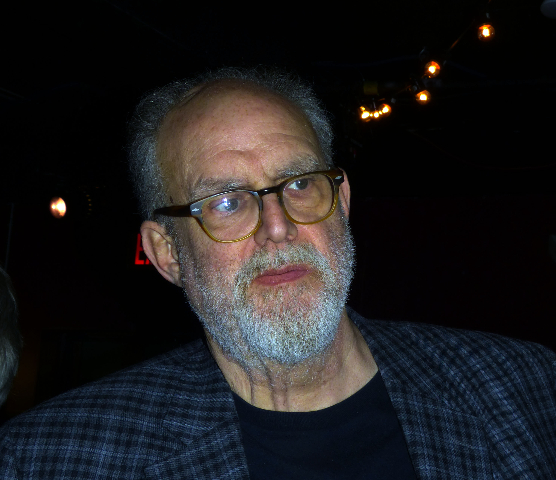 Musicals maven Bill Finn for whom the cabaret is named. 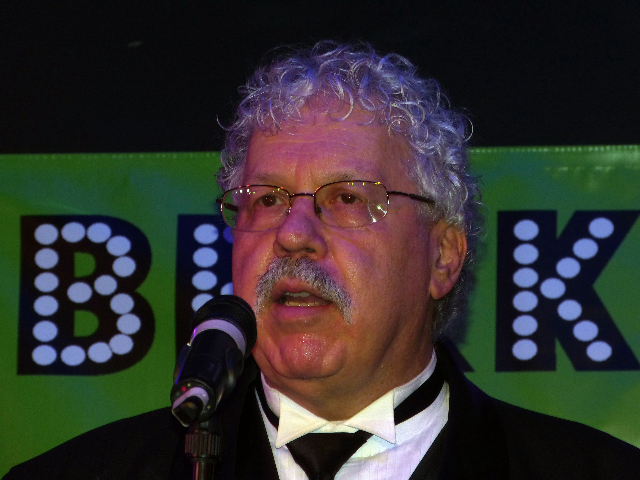 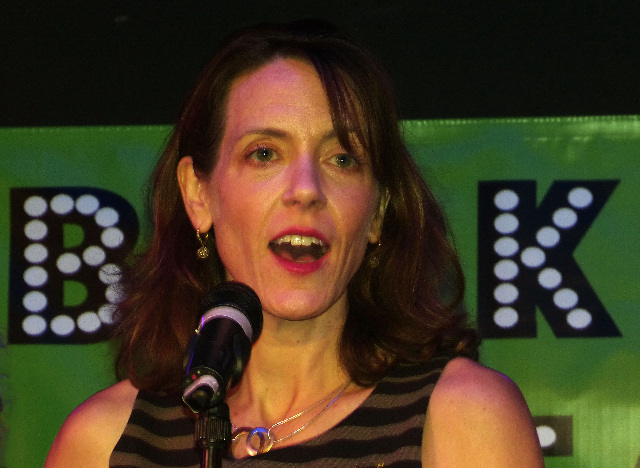 The first award of the evening went to Dana Harrison for Holy Laughter by WAM Theatre. 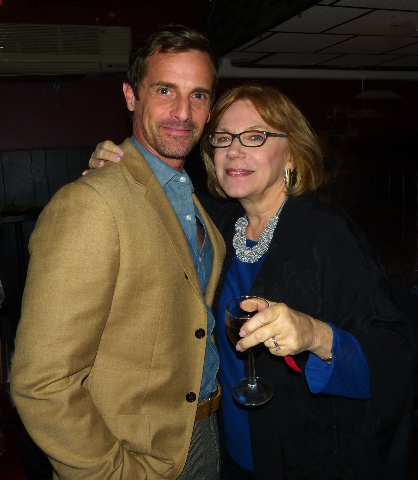 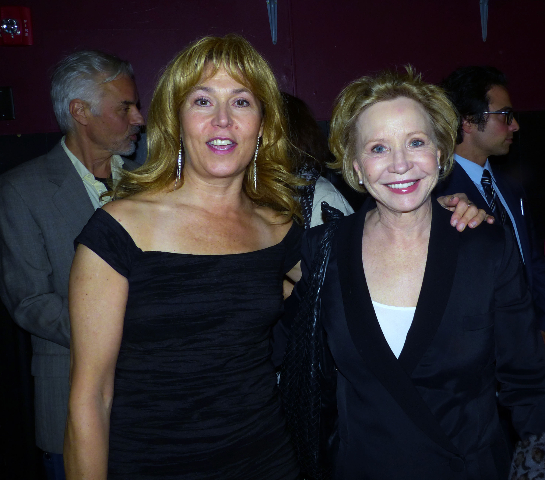 Elizabeth Aspenlieder and Rupp provided the comic interludes of the occasion. 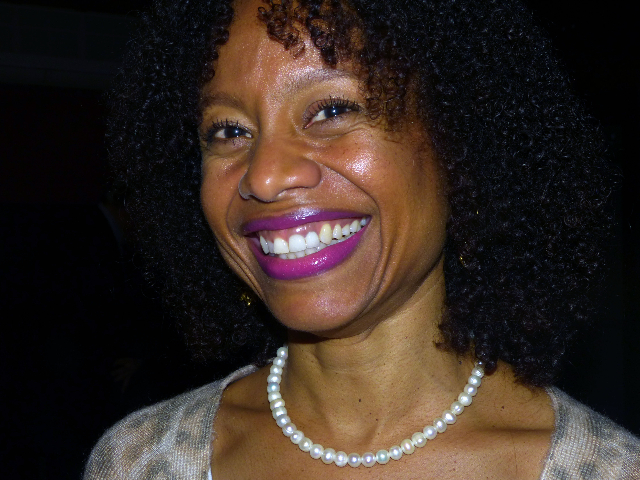 Nehassaiu DeGannes was pleased to receive her first professional award for acting. 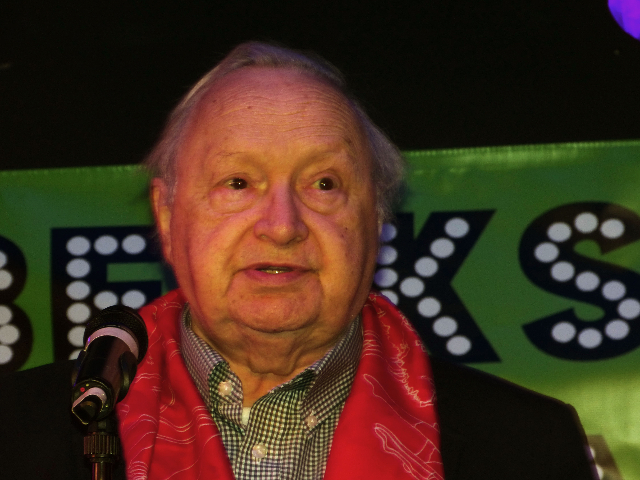 Founder Murray at the podium. 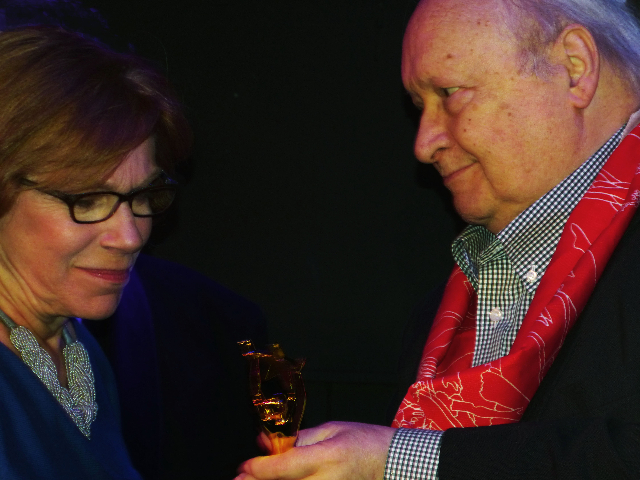 Murray presents Boyd with the award named for him. 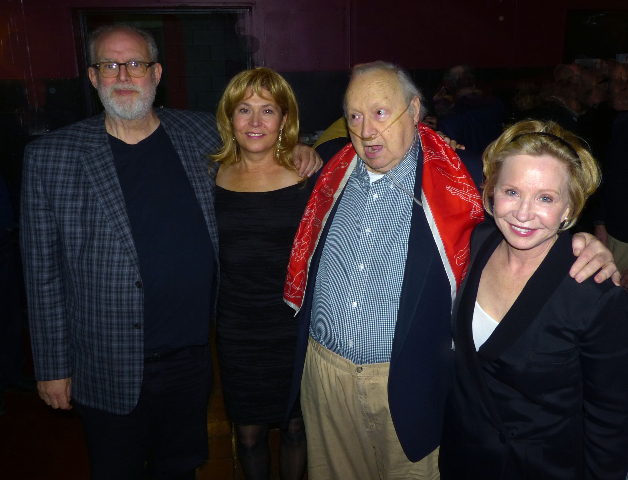 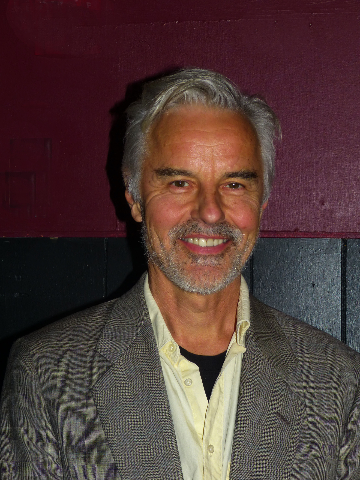 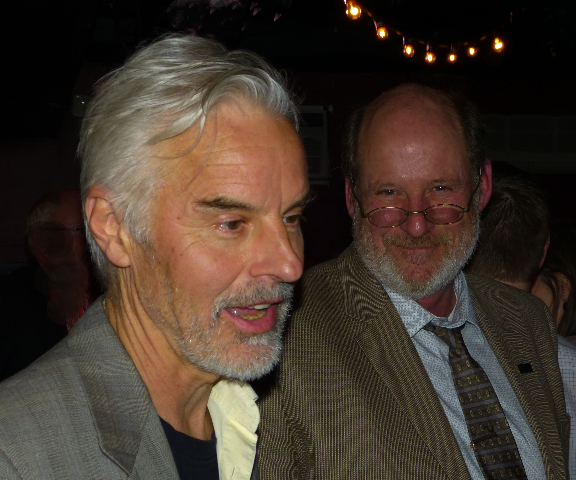 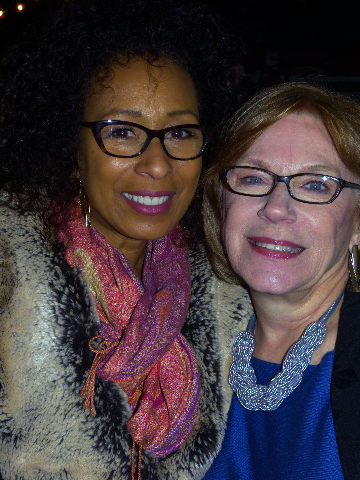 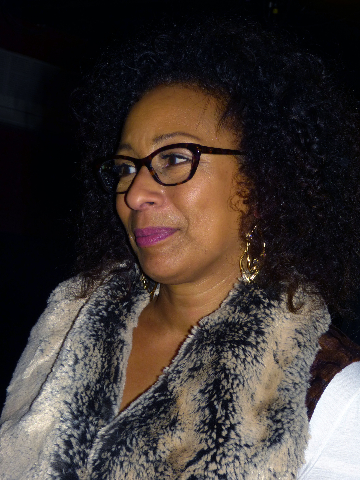 Tunie stated that the role was the most challenging of her career. 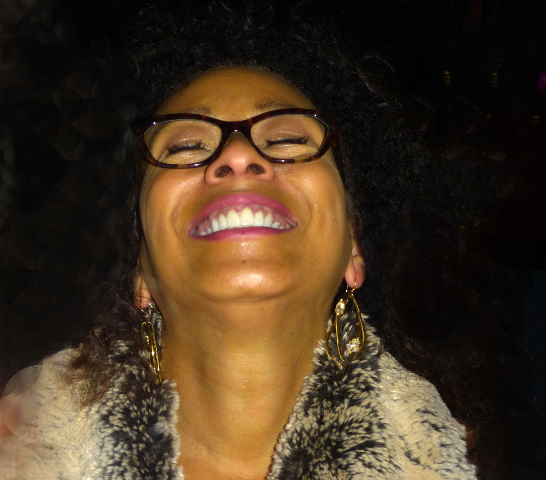 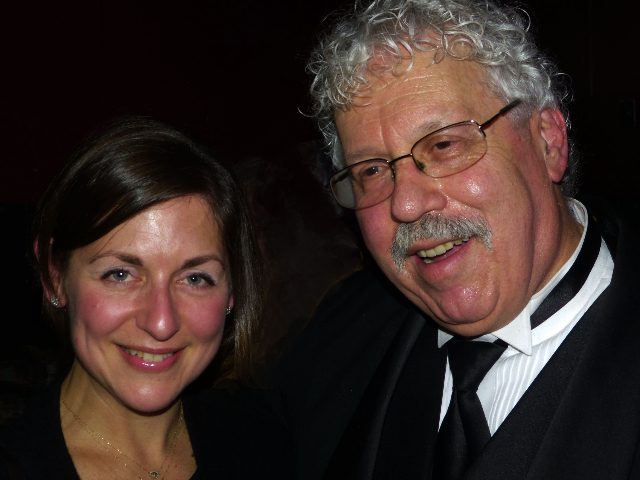 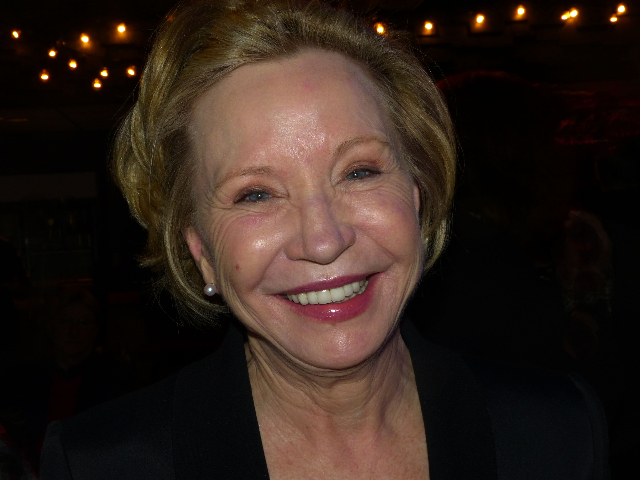 Debra Jo was the life of the party. 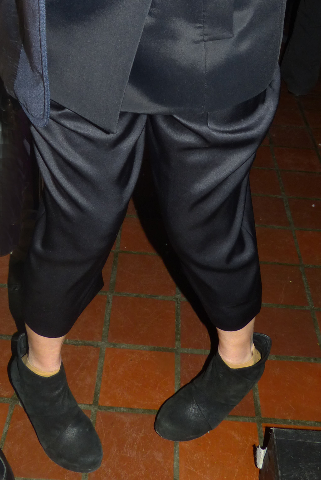 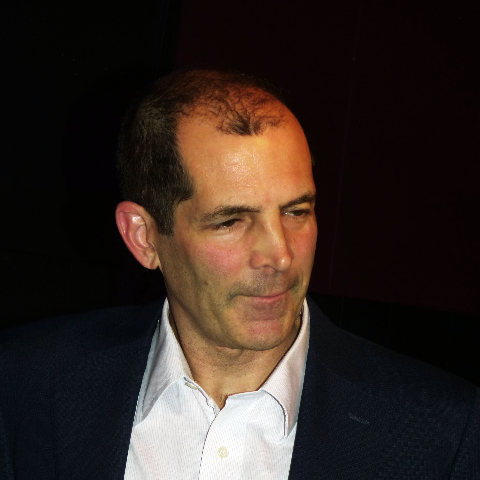 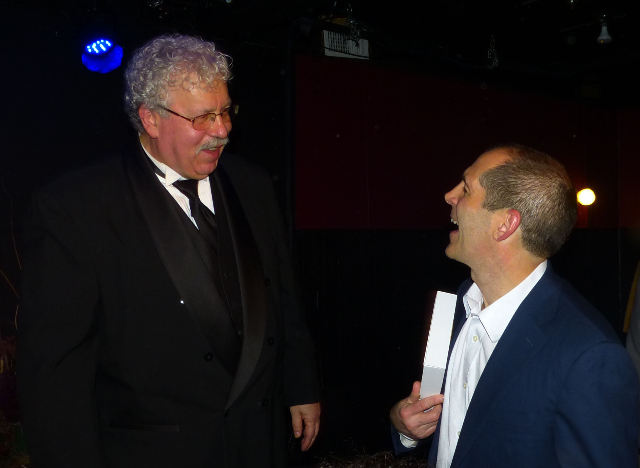 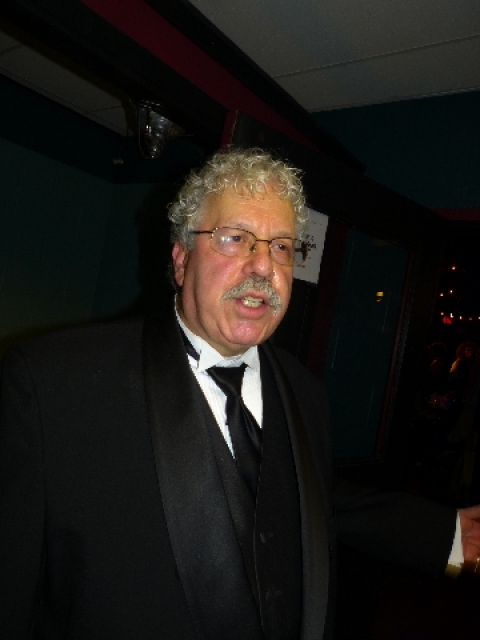 Bergman hosted a night to remember.

Barrington Stage Company's ratskeller, Mr. Finn's Cabaret, was crammed to legal capacity yesterday for The First Annual Berkshire Theatre Awards. All of the region's theatre companies were represented with an even distribution of nominations. It was a strong testament to the strength and diversity of theatre in the region.

Seventeen arts journalists voted on 120 nominees in 25 categories chosen from artists in the 75 live theatre productions mounted in Berkshire County and adjacent areas between October 1, 2015 and September 30, 2016.

The event, which proved to be entertaining, insightful and occasionally hilarious was the brainstorm of critic Larry Murray the publisher of the on line site Berkshire on Stage and Screen.

Accepting their awards many thanked Murray for making them possible. Some years ago, while director of Arts Boston, he had been involved in creating the long standing annual Eliot Norton Awards.

Many noted that given the quality of theatre in the Berkshire region the awards have been long overdue.

The event evolved from a dialogue between Murray and critic Peter Bergman late last summer. He produced the event and superbly co-hosted with critic Macey Levin.

There were so many trips to the podium that members of Barrington Stage- Julianne Boyd, Mark Dold, Debra Jo Rupp, Bill Finn. Tamara Tunie, and Christopher Demos-Brown- formed a tag team.

It was a big night for Barrington's shows from the dominating big and small musicals, Pirates of Penzance and Broadway Bounty Hunters, as well as the drama American Son.

There were multiple awards for Shakespeare & Company's productions of Cry Havoc. Nehassaiu DeGannes, accepting as co-winner for Supporting Performance by a Female Actor in a Large Theatre, also at S&Co., informed the audience that it was her first professional award. She shared it with Scarlett Strallen for Pirates of Penzance.

While Barrington and S&Co. ran the table the first award of the evening, Outstanding Supporting Performance by a Female Actor in an Intimate Theatre, went to Dana Harrison for Holy Laughter (WAM Theatre). She left early for directing duties that night at S&Co.

Other than the Larry Murray Award which went to Julianne Boyd, artistic director of Barrington Stage, for humanitarian accomplishment and community service, all of the recipients were announced in advance. This made it possible for some recipients to attend while many others were working on projects from China to Broadway.

What the evening lacked in suspense, however, was balanced by running gags, banter and poignant insights.

There was an interlude of humor when S&Co. actor Elizabeth Aspenlieder performed passages from roles she performed from Rebeck to Shakespeare. She was rudely interrupted by a bounder in the audience. He proved to be fellow S&Co. actor David Joseph. It was all a part of the act.

Bergman drew upon anecdotal memories of a life in theatre that started as a teenager covering Broadway. He reminded us that he is perhaps the only critic who saw most if not all of the nominated productions.

Interacting with the ferociously perky Debra Jo Rupp, who starred in the comedy Kimberly Akimbo at Barrington Stage, he reminded us that her first TV role was as a topless dancer. As the interaction unfolded it appears that both Bergman and Rupp auditioned, unsuccessfully, for roles in the original Hair. Bergman it seems was plucked off the street by a Svengali producer who felt that his unruly mop of curls were perfect for the eponymous musical.

Hilariously Rupp described a melt down when she crashed the auditions and got a call back. Actually trained in music she was allowed to sing "because they felt sorry for me."  Surprised to get a call back she was petrified about performing nude and stated that singing has rules and precision beyond her capability. Vividly she recalled freezing on the spot.  After that fiasco she abandoned musical theater for drama and comedy.

In Kimberly Akimbo the mid-career Rupp played a quirky, adorable teenager. Bergman said that she should play Puck. Rupp informed us that she already had adding "I sucked."

Amusingly, she told us that she was wearing a jacket purchased five years ago to wear when accepting awards. But that didn't happen until last night. Her pants a recent purchase, ending mid calf, were a fashion disaster. She plans to give them to her sister who lives in Vermont.

The pants riff was picked up by other presenters and milked for humor. Actor Mark Dold pranced around showing his spiffy pants. Ariel Bock and Jonathan Croy, co directors of S&Co. added to the fun. Bock modeled her pants. Croy brought down the house proclaiming that "I'm glad that I remembered to wear pants."

On a more serious note Tamara Tunie, accepting for lead actor in a drama, stated that her role in American Son was the most challenging of her career. She thanked playwright Christopher Demos-Brown for writing a courageous drama with the theme that black lives matter. He thanked Boyd for supporting new work backed by community outreach.

There was a lot of socially relevant work this past season including courageous productions for the Nikos Stage of Williamstown Theatre Festival. Three awards went to the riveting, one man show Cry Havoc at S&Co. Presenters who sponsored the work on behalf of Stephan Wolfert who could not attend, informed us that a production of the play will soon be presented Off Broadway.

While the intensity of Berkshire theatre is packed into the season from May through October Bergman reminded us that it continues year round throughout the region. Much of the emphasis shifts to educational programming with a sprinkle of Holiday shows.

During winter's down time theaters will be planning the 2017 season. Surely there will be delights, surprises and disappointments. We are, after all, critics and not shills and cheerleaders.

Among ourselves critics love to dish, compete and debate. There is always lively discussion in the lobby during opening night. But it is encouraging that we agreed on a slate of winners in a rich field of nominations.

Looking back it was indeed a rewarding season and for that we thank our friend and colleague Larry Murray for an occasion to remember and celebrate them.

During his humorously curmudgeonly remarks, musicals maven Bill Finn stated that "Larry Murray is my favorite critic. He gets it." Amen to that.