Queens of the Gold Mask by Carole Lockwood 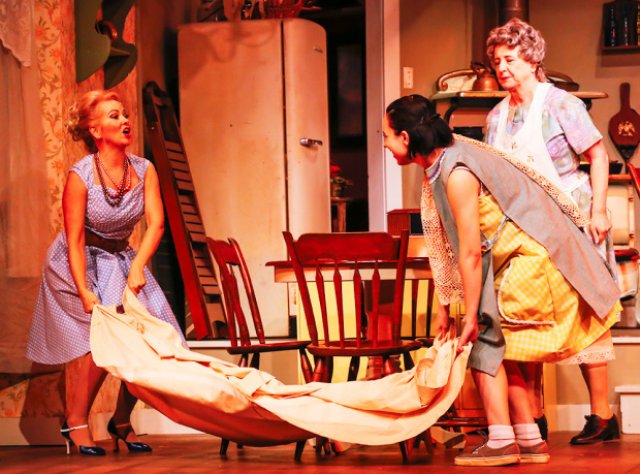 Bravo Ivoryton Playhouse! Brava Artistic Director Jacqueline Hubbard! It is a big risk to produce a new play about a subject many don’t really want to think about written by a playwright who is not widely known.

Yet that is what the Playhouse and Hubbard have done with the current world premiere of Queens of the Gold Mask now through Sunday, Nov. 18.

Playwright Carole Lockwood’s play while set in the past resonates much too much in today’s world.

When most of us think of the Klu Klux Klan, we picture the white robes and hoods, the burning crosses and the resulting violence. While the hoods don’t allow us to the see faces, we think of them as men. But anyone who has seen the footage of the Charlottesville demonstration last year, or other similar but smaller gatherings, must acknowledge that some of the attendees are women. Women who might be our neighbors.

Lockwood’s play is set in Celestial, Alabama in 1961 (act 1) and 1963 (act 2). Is the town’s name an ironic joke? It seems like it. This is small town Alabama not too far from Birmingham, and the Klan has never died. The resurgent civil rights movement is leading to a resurgence in Klan activities; everyone seems to belong.

Queens focuses on the women in this small town, particular a matriarch, Ida Sage or Moma as she is called by most, her daughter-in-law, and four other women. Each is married and each husband is involved in Klan activities though details are hidden from the women.

When writing about such emotional and explosive subjects, any playwright walks a fine line between drama and melodrama, which is usually defined as type of drama that exaggerates emotion, emphasizes plot or action over characterization and often does not observe the laws of cause and effect.

This play falls well over the line into melodrama.

Every melodrama needs a villain with no redeeming qualities and that role is Moma played very well by Ellen Barry. You do not have one iota of sympathy for this manipulative, determined, evil woman. She dominates everyone.

The first act of the play is about Moma’s desire to regain the charter for the “women’s auxiliary” chapter of the Klan in Celestial that was lost when membership fell below seven. So she is determined to recruit two new members and regain the charter. One candidate is easy: Kathy (Two) Boggs is a young woman married to the mayor’s son. Moma would have considered “trash” except for the marriage. Kathy is eager to join.

But the other possible candidate is more problematic. One of the local men has recently brought home his bride, a school teacher from Ohio, after a six month courtship. So could Rose be brought into the fold?

That is left to the local Avon lady, Faith, who talks to Rose about sisterhood, fitting in, making friends. She portrays this as just a group that talks and bakes cookies but does nothing more. She even implies that the men do little. Rose is uncertain; she says she had hoped to not have a conversation about race as Faith questions her about teaching black children and her home town. Her dad was prejudiced, and she and her new husband Buddy had never discussed the issue. But she is bored and lonely and is persuaded to join.

Act two, set in 1963 shows Rose as a contented member of the group; she has adjusted to the way of small town life. She’s also befriended Martha Nell, Moma’s daughter-in-law who she treats like a servant and even physically abuses. Martha played touchingly by Sarah Jo Provost is the most sympathetic character. It seems that in the last two years, a little spark of determination and spunk has developed.

Moma has become even more hateful, if that is possible. But while all the women give lip service to “the cause,” we learn that two have courageously been giving information to the FBI who are investigating Klan activities in the area. In fact, a bug has been planted in Moma’s house. Perhaps the FBI is closing in on her involvement in the bombing of a church in the black quarter and of the high school that was about to be integrated. We see her, make a phone call and then sit waiting until she hears sirens; her look changes to one of contentment and pleasure. One of the suspected informants has been killed.

When Rose finally confronts Moma and says she is leaving the chapter (and her marriage) to return to Ohio, Moma gloats that Ohio has one of the bigger Klan memberships, that the “kiss of death” and oath of secrecy will follow her and that the Klan will continue to grow even in thirty years.

Director Jacqueline Hubbard has handled the cast and show deftly; keeping it moving as much as possible, and the melodramatic moments (and there are many) as realistic as possible. She is aided by the scenic design, a kitchen, dining room and front door of a clean but shabby house; the lighting by Marcus Abbott; and the sound design by Tate R. Burmeister that includes traditional hymns such as “Shall We Gather by the River.”

Overall the cast is excellent, creating multi-dimensional characters even where the playwright didn’t. It is hard to pick just one or two out for praise but certainly Ellen Barry totally immerses herself in the unrelenting force that is Moma, and Sarah Jo Provost is also excellent as the downtrodden Martha Nell. Anna Fagan must make the cheerful and naïve Rose believable and for the most part she succeeds.

This play has promise and certainly the subject matter, the active role of women in the Klan is one that is rarely discussed. But the work needs trimming substantially and many of the characters need to be more developed rather than recognizable stereotypes.

Go see Queens of the Golden Mask. It is well worth your time.