But Is the Musical Spectacular Enough for Broadway 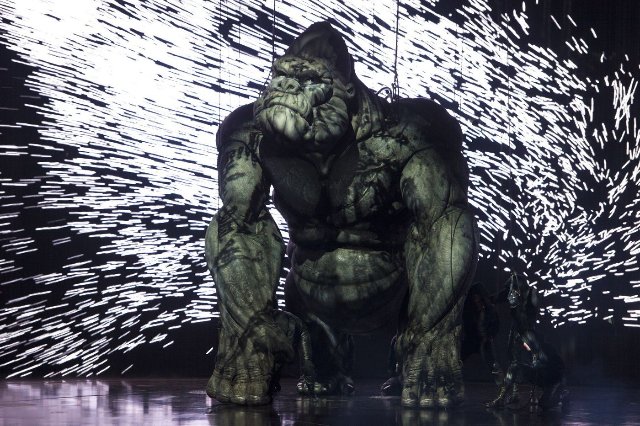 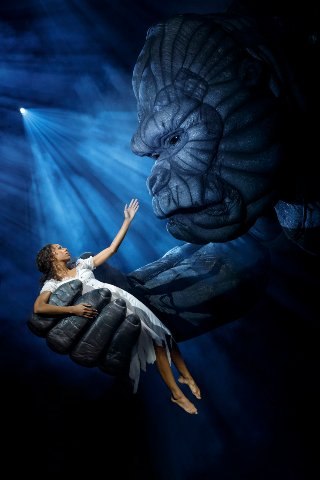 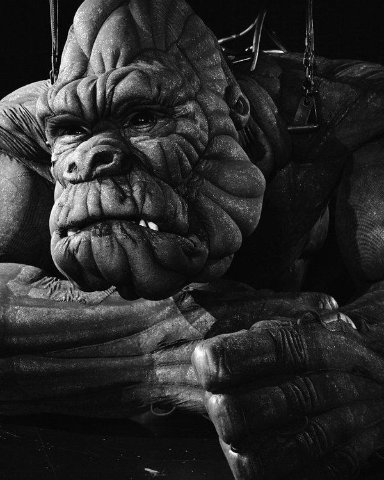 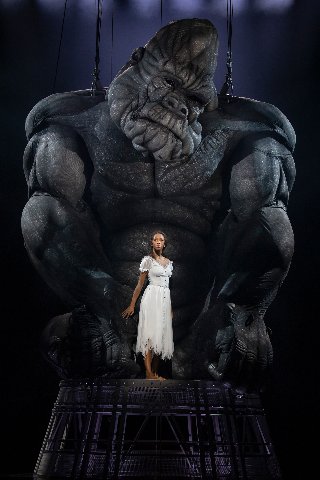 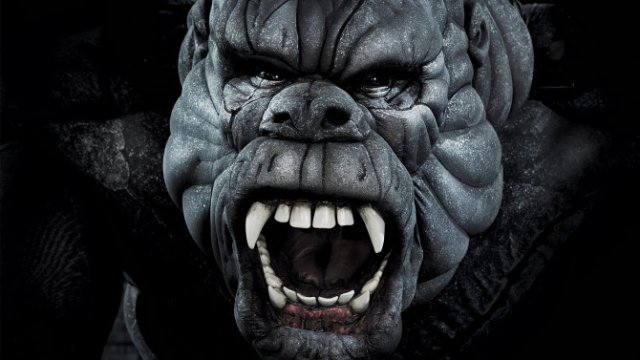 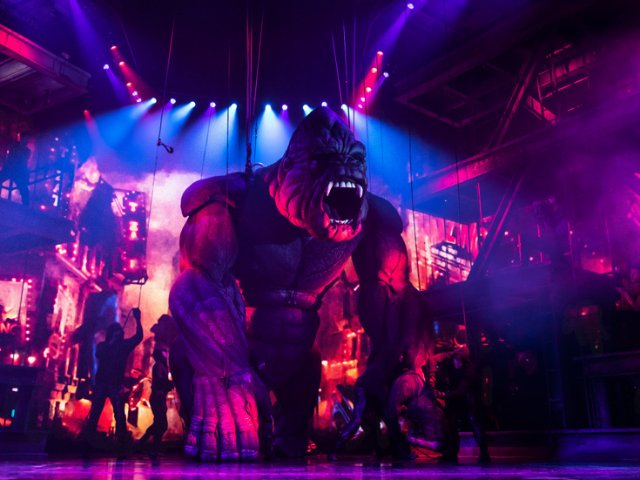 Whoever said that size didn’t matter was speaking about something other than what appears on the stage of NYC’s Broadway Theatre in the form a 20 foot tall, 2000 pound puppet, who goes by the name of “King Kong”.  And, yes size is definitely on the theatrical table for purposes of this “review/essay” along with other observations. Perhaps, I should label this review with a sub-headline called “In Defense of Spectacle”.

Hollywood has immortalized the character of King Kong in five films over the years beginning with King Kong and Fay Wray (1933), then Jessica Lange became his leading lady in 1976.  Actor Naomi Watts caught the eye of Kong in 2005, and Linda Hamilton reprised the Ann Darrow role in 2006.  Up to then, the Kong story revolved around the great ape's love for his leading ladies and in protection of them.

In 2017, actor Brie Larson eschewed the character as a damsel in distress opting to play her Ann Darrow character as combat photographer Mason Weaver on assignment. Instead of the famous white gown of her predecessors, Larson chose to wear pants and a bra top (an appropriate attire for a female combat photographer of today).  Kong also has undergone some cosmetic changes to his body and physical appearance over the years as well.  More about him later.

The movies have always had the creative edge over the theatre when it came to being able to create virtual reality employing computer generate Imagery (CGI) as well as green screen photography over the last forty years.   Audiences appreciated the reality aspects of CGI but always wanted a bit more.  Thus, any future Broadway production remained a risky investment proposition for the stage, mainly because of the logistical size and complexities of such a venture … until now.

The theatrical producers and creative teams, however, were not going to sit idle and be shut out by its much younger sister art form.  In 2013, an Australian creative team decided to take a big risk in producing the King Kong story and making it a musical for the Australian stage in the process. They decided to transfer the production to the Broadway stage.

How to achieve the feat took the vision and skills of many creative experts in the fields of robotics, puppetry, and stagecraft, plus the artistry of stage technicians,  engineers, and programmers necessary to breathe life into the great ape.  One of Hollywood’s most iconic characters of the screen now becomes a jaw-dropping, mesmerizing theatrical experience in staging and execution. It’s an exciting visual feast for the eyes and ears of the audience.

The 2018 production of “King Kong” (the musical), is written by Australian Jack Thorne and is sensationally directed and choreographed by British-born Drew McOnie. There is definitely an Anglo/Aussie pedigree when it comes to this creative team: Musical score by British composer Marius de Vries; Songs by Englishman Eddie Perfect; Australian Lighting Designer Peter Mumford, who paints his stage with various hues and shafts of light, enhance the already striking set and production projection designs of Australian Peter England.  Kudos go to American Sound Designer Peter Hylenski who creates the ominous, thundering sounds that indicate Kong is approaching or whenever he moves on stage.

Creature Designer Jonny Tilders and Costume Designer Roger Kirk are integral to the production as are the orchestrations of Christopher Jannke – for the production’s 24 musical numbers – along with inputs by a list of creative professionals that is way too long to list here.

I must applaud, however, stage manager Kathleen E. Purvis for keeping everyone – a cast of 36 performers and on stage techies, plus the great ape Kong – on their toes throughout the many heavy and precise traffic management issues. A special shout out also goes to the incredibly talented people of Melbourne-based, Artists in Motion company who digitally immerse the entire stage scenery and set into wherever director McOnie want us to be in his storyline at any given moment. These are but a few of the great special effects that are rarely seen in stage productions; especially one of this size and scope.  But they abound in this awe-inspiring production of “King Kong”.

The story in brief, is a contemporary take on the classic tale “Beauty and the Beast”.  It follows a young struggling actor, Ann Darrow, played by relative newcomer Christiani Pitts and a so-so filmmaker, Carl Denham (portrayed by Eric William Morris) as they voyage from the bustling streets of 1930s New York to an uncharted Skull island to capture King Kong, the world’s greatest wonder.  At the center of this 21st century, re-imagining is a 20 foot high, 2000 pound, engineered animatronic gorilla who must be captured and brought back to New York for exhibition.  With Kong, that’s easy for Carl Denham to say than to actually accomplish the feat, as the audience soon finds out.

Everything about this impressive production is massive. The physical size of Kong and the spread of the set projections, created by Peter England are stunning and mind-blowing in their complexity and presentation.  Its budget is rumored to be somewhere in the 30 million dollar range. It boasts a cast of talented, dedicated and committed actors, and of course, the Big Guy himself …King Kong … all 2000 pounds of him.

There are three principal actor is this visually spectacular production: Pitts, as Ann Darrow, who makes her second appearance on Broadway with this role.  She is young and pretty, and her voice, while not a strong Soprano, gets the job done. Morris has the unappealing – from the audience’s POV -role of Carl Denham; part con-man, part sleaze filmmaker/hustler. He has a line of gab worthy of P.T. Barnum who’s a greedy opportunist with visions of amassing millions of dollars by exploiting the world’s largest gorilla.  Denham never loses sight of the pot of gold that is almost within his grasp. But first, he must find, capture, and return Kong to New York.  It’s his all-consuming goal, whatever the cost to others may be.

Denham’s loyal but somewhat dim employee Lumpy, (played by Erik Lochtefeld) acts comic relief.  Regardless, the human actors know who the real star of this production is.  He’s a 20-foot tall gorilla with an attitude, despite soulful eyes and countenance.

A cautionary note to potential audience patrons regarding early “King Kong” reviews. Some of my colleague reviews have ‘savaged’ or written less than raves of “King Kong”. Perhaps, they went expecting to see an updated version of the original story. I don’t know. But when one’s expectations are high and not fulfilled, a negative reaction can take place.   Advice I received many years ago from my daughter and her younger brother, was to just go with the visual flow you’re experiencing in the moment. Let it wash over you.  Forget all those old movie versions you’ve seen over the years.  Just don’t get ahead of what is unfolding on-stage. This is a new unique theatrical stage production.  Not a movie.

Everyone will view the show through their own artistic lenses anyway.  I’s my job to inform you the audience what I saw the night I attended. Yes, theatre is one art form among many.  And yes, it can be enjoyed by everyone who attends.  If one enjoyed “War Horse” and/or “The Lion King”, it’s a pretty safe bet that you will enjoy “King Kong”. Each of those productions involved an interaction between puppets and humans to tell the story.

This fresh take on “King Kong” tells the story visually with imagination and flair in a highly entertaining way.  Simply put, it's a crowd-pleaser of a show which, no doubt, will garner a raft of Tony Award nominations come April 30th of 2019. In the final analysis, however, it’s the audience who are always the final arbiters of whether a show is a success financially and/or creatively.

Having said all of the above, “King Kong”, however, could still stand a little tightening.  The dance numbers although energetic and creatively executed, go on a tad too long; becoming repetitive, which then tends to slow down the forward movement of the on-stage action.  But, I’m picky, picky, when it comes to details.  It’s what separates a good production from a great production.  But I digress.

For me, the reason for attending was to see what new co-producers Carmen Pavlovic of Melbourne Australia-based Global Creatures fame and American Roy Furman, a highly successful Broadway investor, together could come up with regarding the technical aspects that ultimately underpin their entire production.  I was captivated by the spectacularly brilliant display of unique artistry that is breaking new ground in presentation by including a new cadre of theatrical support professionals to the creative team. Technically speaking, it’s the wave of the future concerning our evolving and changing world theatre scene. And productions will be all the better for their inclusion.

I expect “King Hong” the musical to be on Broadway for at least a year or two before sending out national touring companies to regional theatres that can accommodate the logistics of mounting this unique production. So if you find some available vacation time and are planning to visit NYC in the 2018/2019 time frame make sure you see “King Kong”.

“King Kong”, is currently performing at The Broadway Theatre, NYC and is contracted to an open run.   For reservations and ticket information go online to: www.Telecharge.com.