The Gershwin's Crazy for You

At the Alcazar Theatre in San Francisco 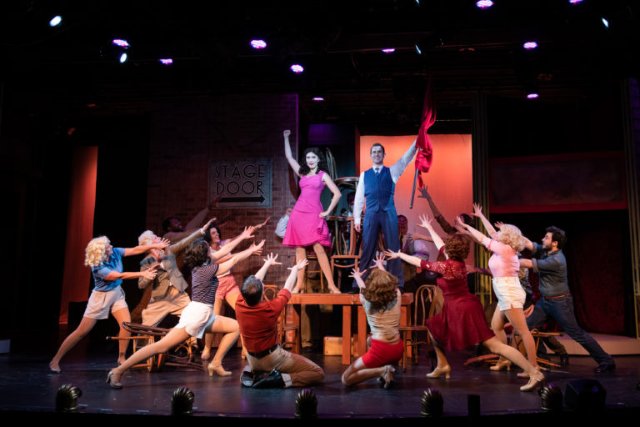 While waiting for the opening night performance of Crazy for You, a friend asked if I was a Gershwin fan. I mumbled an ambiguous, non-committal reply. Sure, George and Ira’s Porgy and Bess is a national treasure and monument to musical innovation. Sure, George’s symphonic works that embrace jazz in a classical milieu are world renowned. But the context of the question seemed to be about the Gershwins’ pop compositions, of which I was less certain. After seeing Bay Area Musicals’ delightful rendition of the marvelous mashup of Gershwin tunes dressing up a light hearted musical comedy, I am reminded – yes, I am a Gershwin fan.

Crazy for You opened its successful Broadway run in 1992, yet it is very much a musical of the ’30s. Creator Ken Ludwig took the concept of the Gershwins’ 1930 musical Girl Crazy and wrote a story with parallel coloration and themes. Ludwig included most of the tunes from that musical and peppered the new work with some of their most memorable songs from other sources. The result is an entertainment that will keep you humming familiar tunes and smiling all evening long.

The basic premise is oft used. A venerated institution is in collapse. A young, heroic man comes along, and aided by a love interest, he finds a way to raise the money through entertainment to resuscitate the dying corpse. You can just picture young Mickey Rooney ebulliently rallying the troops with the call “Come on kids! Let’s put on a musical!” Actually, he did pretty much that in the most notable film version of Girl Crazy.

In Crazy for You, Bobby Child is the reluctant heir to a New York banking house, and he is sent to foreclose on an unused but beloved theater in Deadrock, Nevada. You may be surprised to learn that Bobby falls in love with the owner’s daughter and dedicates himself to saving the theater and winning the girl. Along the way, he misrepresents who he is; becomes an imposter in disguise; clashes with powerful people; and alienates the girl he loves while the wolf is at the door. But hey, this is musical comedy. Can you guess the ending?

The Gershwins were quintessential New Yorkers, and to hear their music warbled by western hillbillies seems incongruous. But early on you realize that everything is going to be alright when Deadrock’s riff raff give a hella good countrified rendition of the tuneful “Biding My Time.” From that point, we are regaled with “Someone to Watch Over Me,” “Embraceable You,” “I Got Rhythm,” “They Can’t Take That Away From Me,” “Nice Work if You Can Get It,” and more. After that, who could not be a Gershwin fan?

Director Matthew McCoy does a fine job integrating all of the pieces. Brisk pace and vitality are maintained with movement and through McCoy and Danielle Cheiken’s tap-dominated choreography, which the dancers carry off skillfully. Remarkable effect is created by a single set, designed by Kuo-Hao Lo and engineered by Stuart Lyle. Using several three-dimensional set structures, each on its own lazy susan, the pieces are rotated to shift among various locales on Broadway and in Deadrock, without stopping the flow of the action. One area that needs improvement is an oddly common problem with orchestras in smaller theaters. The instruments are not in tune with one another from the get-go, creating an inexcusably harsh sound.

Conor DeVoe as Bobby Child is the prototypical musical actor. His vocals reflect good training, and his dance is exemplary. While the dominant genre is tap, which he does very well, he also gets to show off some ballet-influenced moves that he executes with precision and grace. The winsome Danielle Altizio is his counterpart as Polly, and she makes for a fitting and talented partner, especially in her lead and solo singing. Other major players are also effective. Sean McGrory has a smirking, wet-behind-the-ears look that would appear a misfit for playing Lank, the tavern-and-hotel-owning antagonist, but he brings a disarming charm to the part that works well.

In addition to great music and dance, Crazy for You is full of some of the corniest imaginable humor and inside jokes that are compatible with the tone of the work. And they are delivered well. A couple of funny sequences involve Bobby disguising himself as the Broadway follies impresario Bela Zangler, played by Tony Michaels. When the real Zangler comes along, they share a “mirror” scene a la the Marx Brothers, and some verbal exchanges suggestive of Abbott and Costello. Both are very amusing.

Altogether, this is a rewarding production of a well-regarded musical.

Crazy for You with music by George Gershwin, lyrics by Ira Gershwin, and book by Ken Ludwig, is produced by Bay Area Musicals and plays at the Alcazar Theatre, 650 Geary St., San Francisco, CA through December 16, 2018.

Posted courtesy of for all events.