Ain’t Too Proud by Dominique Morisseau 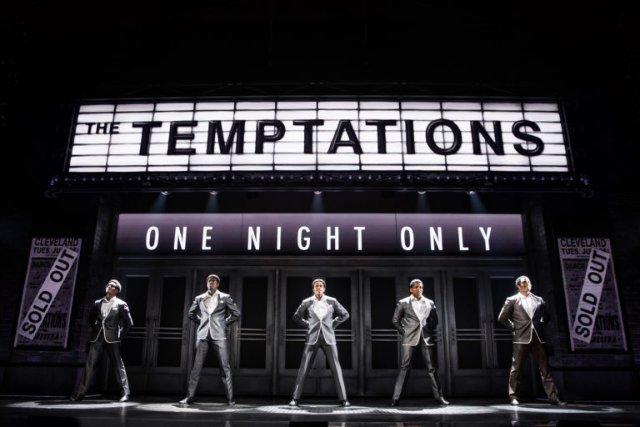 For a playwright, what could be an easier and perhaps less consequential activity than crafting a jukebox musical? Cobble together a batch of songs with a bit of storyline connective tissue, and voilà, a mediocre theatrical offering. But occasionally, a talented artist creates an entertainment masterpiece that deservedly plays to full house, standing ovations every night.

Accomplished playwright Dominique Morisseau knows her canvass, Detroit’s African-American community, particularly as depicted in her dramatic plays, the Detroit trilogy. She also controls her palette in this outing, blending humor, sadness, and infectious musical performance. Armed with the biography, The Temptations, written by founding member Otis Williams, Morisseau paints a complex picture with consummate skill. As one who attended this musical with a heavy dose of skepticism – not keen on the genre and without the enthusiasm of a Temptations devotee – I must admit to total conversion.

Ain’t Too Proud could not exist without high energy performances of the Temptations songs, and they are so authentic, you’d think you’re seeing the actual group. The mix of voices backed by an 18-piece orchestra along with Sergio Trujillo’s exciting choreography hit the mark. In addition to the multipart harmony of exquisite voices, the Temps twirl, twist, toe tap, and finger point their way through over two dozen of the finest songs in the Motown catalog.

An added dimension is the inclusion of covers that the group and its predecessors sang before tunes were written for them – such as the infectious “Shout” or the beautiful ballad “In the Still of the Night.”  Music of The Supremes is also woven in as they represented the biggest competition for recognition in the Rhythm & Blues space.  Of course, The Temptations music takes center stage, particularly their unforgettable classic period, bookended by 1963’s “The Way You Do the Things You Do,” and 1972’s “Papa Was a Rolling Stone.”

The outstanding Derrick Baskin as Otis Williams anchors the show. Appropriately, as the cornerstone to forming the group and its last surviving member, Otis acts as the storyteller throughout, adding narration to the events playing out on the stage. And while many of us may have known about the occasional dissention, death, separation, or scandal that the group suffered, the production puts the characters in front of you as real people that you care about, and you feel the impact of events.

Each member of the “Classic Five” lineup of the Temps is well personified and performed. Paul Williams (played by James Harkness) is devoted but fragile and troubled. Bass Melvin Franklin (Jawan M. Jackson) is wry, steady, and supportive. Frequent lead singer David Ruffin (Elijah Ahmad Lewis) is highly talented, but self-centered and irresponsible. Sweet voiced Eddie Kendricks (Jelani Remy) is the Frazier to Otis’s Ali, in frequent battle over the needs of the individual versus the group. Finally, Otis himself, is the adult in the room. Although he organized the group, he allows others to bask in the limelight while he makes personal sacrifice to ensure its survival.

The group deals not only with its own individual and collective demons, but with broader societal ills as well. As they gain prominence, Detroit becomes a racial powder keg, igniting in 1967. Political assassinations and danger on southern tours punctuate their lives. Throughout, they confront the challenge of whether and how to make these issues part of their public presence. Motown Records founder Barry Gordy (portrayed exquisitely as a velvet hammer puppeteer by Jahi Kearse) works to find a safe path through a potential public relations minefield.

The production is everything you would expect from Broadway. With over 30 performers, acting, singing, and dancing is great throughout, though a couple of casting decisions seem strange. In real life, Gordy replaced the hefty voiced Flo Ballard as lead singer of The Supremes with Diana Ross specifically to create a light sound. With no criticism of Candice Marie Woods who plays Ross and has a fine voice, it is much heavier and doesn’t really capture The Supremes ethereal sound. Also, Joshua Morgan as The Temptations’ manager Shelly Berger, lacked the Jewish affect and demonstrative attitude that one would expect from an entertainment manager, though Berger may have been mousy in reality. But these slight dissonances are small nicks in a shiny armor.

Ain’t Too Proud with book by Dominique Morisseau and music and lyrics from The Legendary Motown Catalog plays at the Imperial Theatre, 249 West 45th St., New York, NY on an open ended run.