The Pride By Alexi Kaye Campbell 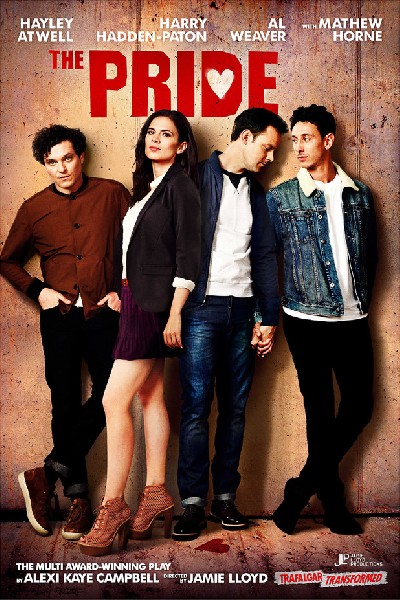 Poster for the play. 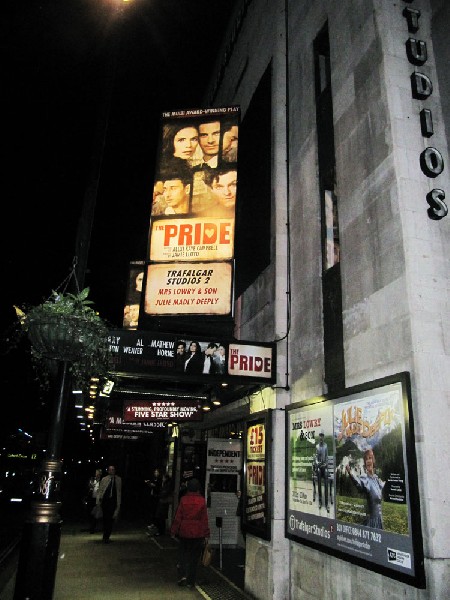 Marquee of The Pride. 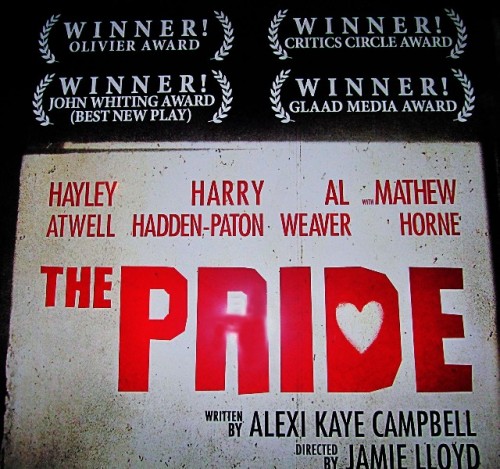 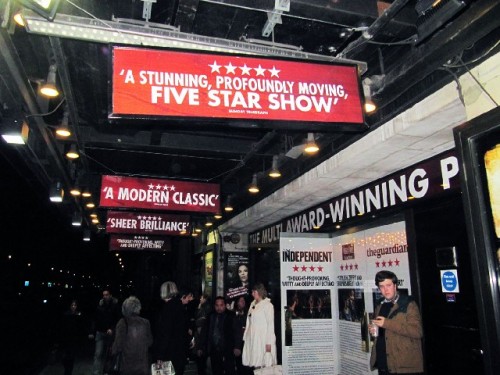 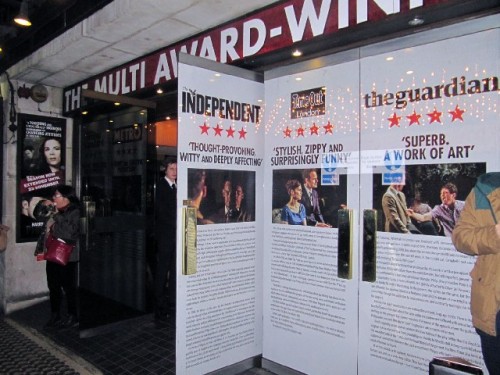 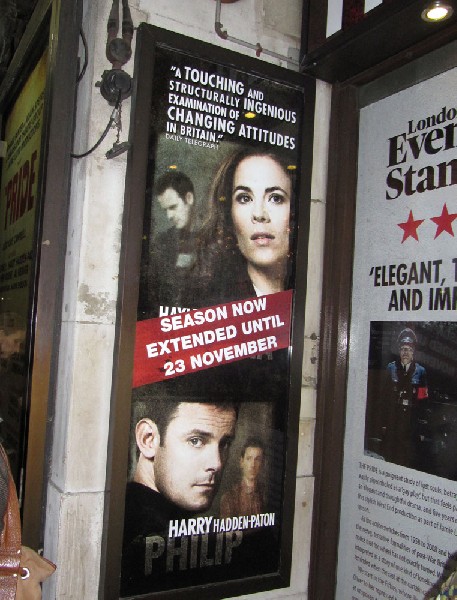 The run has been extended by popular demand. 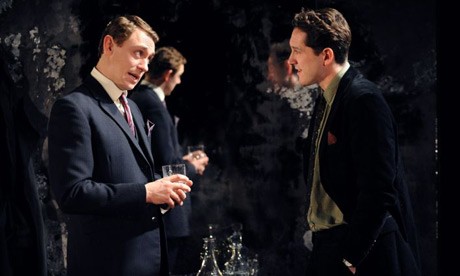 I’ve heard so much about you. 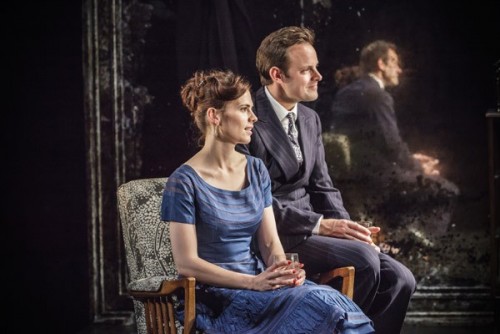 Scenes from a troubled marriage. 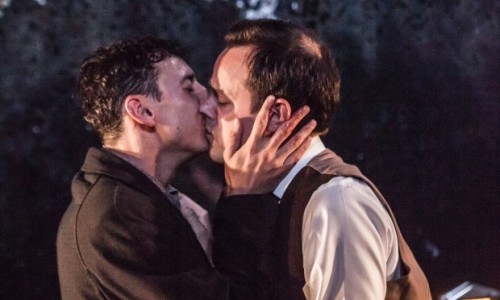 In response to the repressive, anti-gay statues of Vladimir Putin, at the end of Alexi Kay Campbell’s 2008 gay themed play, The Pride, revived in a London production extended through November 23, the four actors hold up signs “To Russia With Love” during curtain calls.

In mostly rave, five star reviews, critics note that regressive turn of events as a timely motive behind the revival of the multiple award winning play. There are two time frames for The Pride, the grim 1950s, before activism came out of the closet, and a fast forward to events in 2008.

Ironically, making our way to the theatre just the other side of Trafalgar Square, we waded through a sea of coppers keeping watch over the London version of global protests against the greed of financiers, governments and the one percent.

The youthful protesters either wore Guy Fawkes masks or painted their faces accordingly.

It was a poignant reminder that racial and sexual equality have most often occurred when militants have fought and died for those rights.

Influenced by multipe awards and rave reviews we opted to see the play.

Unfortunately, The Pride was disappointing and did not live up to its reputation.

Part of that, admittedly, derives from not being able to connect with the content and humor of the play. The largely male audience often laughed at situations and lines that I didn’t get or weren’t all that amusing.

While most reviews lavishly praise the actors and describe the play as a work of art, alas, I didn’t see it that way.

Unless it is pure, knee jerk, feel good propaganda, a work of art must transcend an obvious agenda.

Looking around at the audience The Pride was well received while preaching to an audience of the converted.

Much of the dialogue seemed trite and obvious with hard hitting aspects played for shock value.

With a minimalist set and props, the primary feature was an enormous, frosted, framed mirror with two concealed doors, the staging was stagnant. That emphasized the endlessly talky aspect of a drama driven into the ground by dialogue.

In the opening 1950s scene we are in a drawing room where Phillip (Harry Hadden-Paton), who is in real estate investments and his wife Sylvia (Hayley Atwell), an illustrator, await the arrival of Oliver (Al Weaver) an author of children’s books. She is collaborating on a book with him.

There are tedious one lump or two, or will it be scotch, pleasantries. We endure dialogue on the level of "I've heard so much about you and have been dying to meet you." This can be witty and brilliant in an Oscar Wilde or Shavian drawing room drama, which The Pride, trust me, is not.

Beneath the forced British manners and exchanges of pleasantries there is tension in the scene. Sylvia, while praising Oliver and his gifts as an author, may have had a motive in bringing together the obviously gay but not outed Oliver, and her suspiciously closeted husband.

They quickly connect in an affair that is kept under the radar (surely she knows) and lasts for a year and a half. Oliver, it seems, is a self described sex addict given to anonymous and sordid encounters. The boy can't help it. Phillip who is not of that ilk confuses sex with love.

Accordingly, he is repulsed by the tearful confessions and pleadings of Oliver.

With a change of scene we see a Nazi SS Officer (Mathew Horne) on stage.

Good grief what’s this about?

Oliver slithers in stripped to skivvies. The Nazi humiliates him and orders him to lick his boots. Aha. So this is an S&M sex scene.

Until the groveling Oliver calls for a time out. It’s been three whole days since the breakup with Phillip and he just isn’t ready for humiliating role play with a rent boy.

Said Nazi, however, has the best lines of the evening in the mode of whatever you want honey, you’re paying for it. Rent-a-Nazis don’t come cheap.

Well, it is rather hilarious.

Leaping forward to 2008 it’s still Phillip and Oliver but as totally different individuals. More or less portraying the same aspects of closeted and not. This time Oliver is a journalist given to random sex acts with strangers. Like the suited businessmen who bash him about with contempt after a BJ and then head home for dinner with the wife and kids.

Again, Phillip is aghast at Oliver’s sex rampages. It helps him to see the light, so to speak. He is determined to seek a “cure” for his urges and make nice with his wife.

We all too clearly know how that will turn out.

In another role Hayley Atwell is now the friend (sister?) of the oh-so-needy Oliver. When bouncing around between abusive lovers he often crashes on her couch. But she is getting tired of this and needs to pursue her own life. She plays along and enables his passions with gratuitous size queen jokes.

When things threaten to bog down, the versatile Mathew Horne jumps in with yet another, off the wall character. From Nazi rent boy he morphs into an over the top tabloid editor. He wants to hire Oliver to write a story about the millions of closeted men having anonymous rough sex. It’s a cover for Oliver to do the ‘research' that results in a confrontation and melt down with Phillip.

Like the movie and then musical Far From Heaven the theory is advanced that homosexuality is a curable disease.

Of course we have long since been disabused of that approach.

Later, with poignant knowing, Sylvia gives the pen back to Oliver which she found in the couch. While trust has been violated she conveys willingness for them to collaborate again in the future. As well as an understanding that Oliver can provide for Phillip what she can’t.

The weak writing of Sylvia doesn't give her much to work with. A passive response to her husband's affair, and loyalty to Oliver as a collaborator, just doesn't have much conviction. It is difficult to believe that a woman would be so apathetic and passively accepting. There could be a stronger reaction to the disaster of a failed marriage.

There is, in the context of the play, a happy ending.

Prior to writing this review I discussed it with a critic friend and mentor. He described the horrors of growing up gay in the 1950s including a stint in the Navy prior to don’t ask don’t tell.

“Now you have a taste of what it’s like for a gay man to sit through all those straight family dramas that I just can’t identify with” he said.

From the other side of the plate this production may well have deserved its lavish praise.

I’m still trying to get a fix on why it didn’t work for me.