The 16 acre Mass MoCA campus is about the enter its final phase of development. 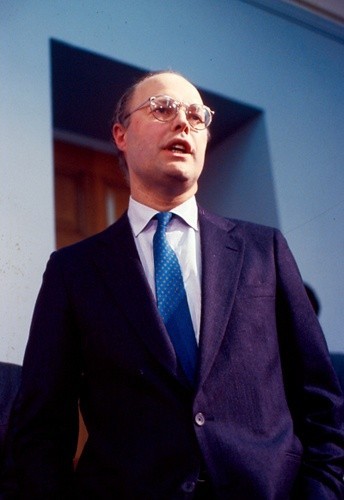 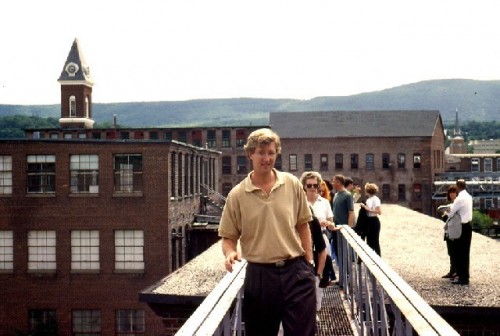 A young Joe Thompson guided the media on a tour of the campus before Mass MoCA opened. 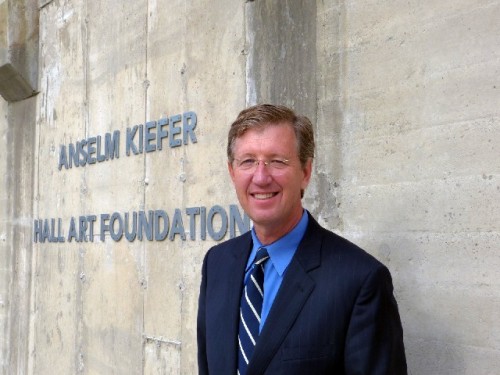 Thompson last summer during the opening of the Anselm Kiefer building. 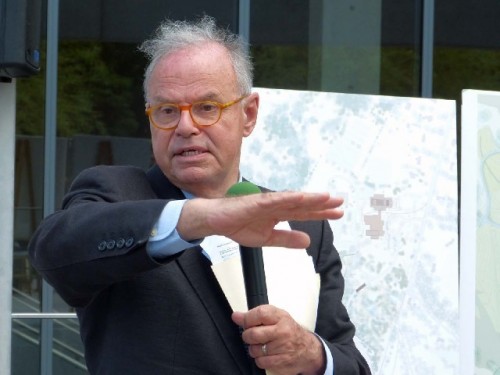 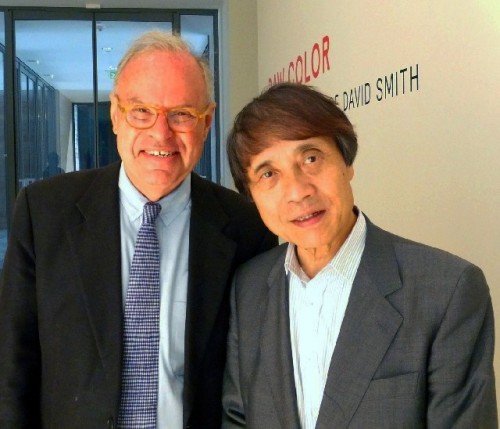 Tomorrow, November 17 Mass MoCA announces plans for the renovation and programming of 130,000 square feet of industrial space as the final phase of development for its North Adams campus. Scheduled to open in 2016 the museum must match a state grant for $25.4 million. The total project is estimated at $60 million. Works from the estates of Robert Rauschenberg and Louise Bourgeoise will be on view in addition to installations by Laurie Anderson, Jenny Holzer, James Turrell and Gunnar Schoenbeck.

The Berkshire based museum occupies a 16-acre complex of 26 historic, 19th century mill buildings. The economy of the city, today the smallest and poorest in Massachusetts, was built on King Cotton. It was involved in all aspects from investing in the slave trade, through importing raw material, weaving and printing cloth. A variety of mills in the Northern Berkshires processed cotton into thread and then wove it into cloth. The MoCA campus, Arnold Printworks, created patterns on the cloth.

The mills largely shut down as the cotton industry first moved south then off shore. In its next incarnation the MoCA campus became Sprague Electric which also left the city and devastated the local economy. Tom Krens, then director of the neighboring Williams College Museum of Art, conceived the idea of transforming abandoned and deteriorating mill buildings into Mass MoCA.

When Krens took a position as director of the Guggenheim Museum the task of developing Mass MoCA passed to a then young Williams graduate Joe Thompson. Having endured countless obstacles the founding director is in the home stretch of a massive and complex build out and development.

“It’s my idea of museum nirvana,” Joseph C. Thompson, the director of Mass MoCA   revealed to the Washington Post over the weekend. “We have a set core of collections around which our changing programs and performances can spin like electrons.”

The installations in the new wing, like those in the buildings dedicated to Sol LeWitt and Anselm Kiefer, will be long-term loans ranging from fifteen to twenty five years.

Founded as a kunsthalle the museum does not have a permanent collection. Taste can change in a generation. What draws audiences today may not in the future.

The extended loans, however, represent advantages of scale and maintenance. There will be six, blue chip partnerships with estates and living artists. These extended loans considerably expand on the appeal of Kiefer and LeWitt.

This move now confirms Mass MoCA’s status as the foremost world destination for contemporary art. Unlike Dia Beacon and the Chinati/ Judd Foundations in Marfa, Texas there is more dynamic flexibility with a major commitment to rotating exhibitions.

The vaulted space of Building Five is the largest of its kind devoted to rotating exhibitions of individual artists.

In 2007 the museum was unhinged over an installation by Christoph Büchel. With resultant loss of prestige and integrity the media was sharply divided in reporting the conflict. It was a time of low morale for the museum. There was speculation that major artists would not collaborate with MoCA.

Jenny Holzer stepped up with a video installation in Building Five that got Mass MoCA back on track. Significantly, the artist who has been a long standing friend and neighbor of the museum has been selected for an installation in the new wing.

Renovation of Building Six allows for sustained display of established masters. The ebb and flow of trends in contemporary art is displayed in galleries for changing exhibitions.

As extended loans the works come endowed by lenders be they the living artists, collectors, or estate foundations. While maintaing more exhibition space entails staff and budget increases there are one time only installation costs. With greater critical mass of major works on view it is anticipated that more visitors will come to the Northern Berkshires.

That was evident this summer with the opening of the renovated Clark Art Institute in nearby Williamstown. Its director, Michael Conforti, has been brainstorming with Thompson on how they may work together.

This summer James Turrell and the Canadian conceptual artist, Janet Cardiff, met with Conforti and the Clark. They explored possibilities of site specific works on the Clark's now manicured campus and walking paths.

It is anticipated that Conforti will announce plans for a Turrell work at the Clark. There are ongoing discussions about developing a prominent building on the MoCA campus that is on long term lease to the Clark.

As collections age, with the wear and tear of exhibitions, increasing resources are required for repair and restoration.

In the case of LeWitt, if need be, site-specific wall works may be repainted. The museum retains access to the artists’ original plans owned by the estate and Yale University. The conceptual works were originally installed by technicians.

A generation down the line Mass MoCA may seemed dated but not to the extent of the permanent collections of minimalism in Marfa, Texas and Beacon, New York.

Thompson is sanguine that won’t happen.

“I’ll eat my hat if this doesn’t still look fresh and beautiful in 20 years from now,” he told the Post.

What follows is the Mass MoCA Press Release.

This week Mass MoCA announces plans for the renovation and programming of 130,000 square feet of industrial space as the final phase of development for its North Adams campus. Planned to open in 2016 the museum must match a state grant for $25.4 million. Works from the estates of Robert Rauchenberg and Louise Bourgeoise will be on view in addition to installations by Laurie Anderson, Jenny Holzer, James Turrell and Gunnar Schoenbeck.

MASS MoCA announces that $13.5 million of $30 million goal in additional private capital funding has been raised to date.

A rich array of long-term programming initiatives coupled with dedicated exhibition, performance, and production studios under development with:

For background information on all artistic programming partners, visit this link:

North Adams, Massachusetts - MASS MoCA announced today a new building renovation and programming initiative encompassing a wide range of long-term installations and changing exhibitions, artist residencies, expanded art fabrication facilities, improved music festival amenities, and enhanced linkages to the North Adams downtown business district and surrounding region through new biking and pedestrian pathways and bridges. The culmination of a three-decade project to repurpose a 16-acre complex of 26 historic mill buildings in the Berkshires of western Massachusetts as a mixed use center for contemporary performing and visual arts, the new programs include:

These long-term installations, changing exhibitions, and programmatic initiatives - jointly realized with artists, foundations, and other institutional and private lenders and supporters - will range in duration from 15 to 25 years (following models established with Yale University and Sol LeWitt, and The Hall Art Foundation and Anselm Kiefer), and will together occupy some 90,000 SF of gallery and public circulation space. In addition to those initiatives, the Phase III refurbishments will also include:

With more galleries containing milestone works of art on extended loan (MASS MoCA is not a collecting institution, and develops all its quasi-permanent exhibitions in collaboration with artists, foundations, and other institutions and lenders), the average length of time museum visitors stay in the region is expected to increase markedly. Coupled with the recent Tadao Ando expansion at the nearby Clark Art Institute in Williamstown (which is 5 miles west of MASS MoCA), planners project a substantial increase in regional overnight and multiple-day stays, which in turn generates significant dividends for the Berkshires' economy, an important part of which is based on culture, education, and outdoor recreation. "It used to be easy to make a quick day trip to MASS MoCA and the Clark, but that is already no longer true with MASS MoCA's growth over the past few years, and with the Clark's expansion," noted North Adams Mayor Richard Alcombright. "Once Phase III is done, this neck of the woods will have enough things to see and do for a long weekend or even a week. It's a game-changer."

The scope of Phase III work encompasses 130,000 square feet of interior renovations to MASS MoCA's 19th-century mill buildings (which are listed on the National Register of Historic Places). Other infrastructure improvements will include landscaping and lighting improvements to the museum's largest concert courtyard. The renovations are to be made possible through a recently announced $25.4M state infrastructure grant supplemented by private funds raised in a $30 million fund-raising campaign, called the Confluence Campaign. $13.5 million has been pledged or raised to date in the Confluence Campaign. The Confluence Campaign proceeds will be allocated to construction costs and other long-term strategic investments in infrastructure, and towards a building maintenance reserve/endowment funding, with the building maintenance reserve and endowment fund targeted at approximately $18 million.

The private fund drive is called the "Confluence Campaign" to signal the confluence of art resources gathering at MASS MoCA through the partnerships and space-sharing collaborations at the heart of this Phase III expansion (together with previous projects with Yale University, the Hall Art Foundation, and the Clark Art Institute), and the fact that the next round of renovations will be focused on the prow-shaped Building 6, which occupies a peninsular tract of land at the confluence of the North and South branches of the Hoosic River at the westernmost perimeter of the factory-campus. Featuring over one acre (40,000 SF) of interior space per floor, the three-story Building 6 will feature spacious galleries on all floors; a dramatic skylit stairwell that rises 40' high as it runs 200' through the center axis of the building; production studios; video galleries and performance spaces on the upper two stories; and workshops and other back-of-house functions on the ground floor.

Phase III renovations are expected to commence summer 2015, with the new programs and renovated facilities opening to the public mid-2017. The architects are Bruner/Cott and Associates of Cambridge, Massachusetts, who were also the designers of MASS MoCA's first two phases.