From Silence by Anne Marilyn Lucas

NY's Theater for the New City 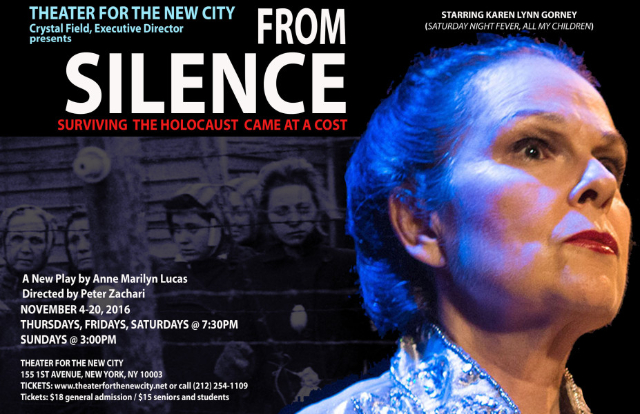 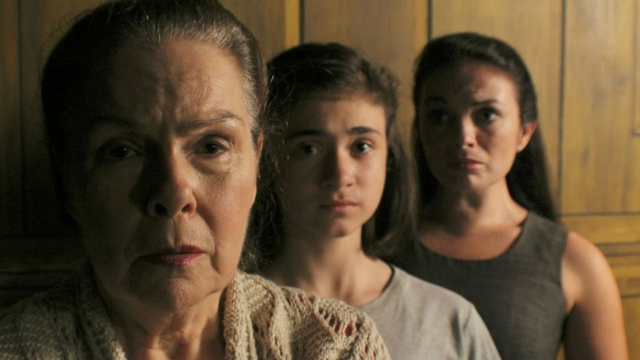 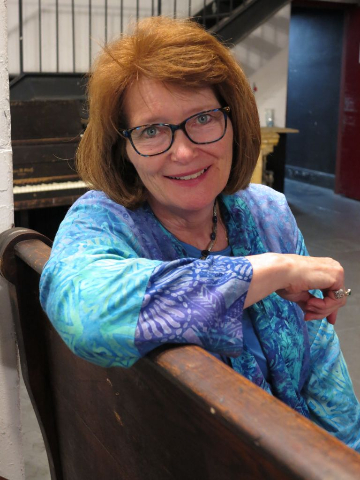 Ironically, in order for us and others to heal and look toward a brighter future, sometimes we need to re-open old wounds -- even though they may still feel as raw as recently-inflicted, fresh injuries.

Seventy-nine-year-old Esther Gold arrives at that realization in “From Silence,” the gripping, unflinching, heartfelt, innovative but sometimes hard to follow new play by Anne Marilyn Lucas.

The brutally honest play is based on Lucas' observations of second generation Holocaust survivors and their families. The piece centers on a Jewish Holocaust survivor who, as a coping mechanism, has remained silent about her experiences in detention.

“From Silence” is receiving its world premiere production at the multi-award winning, renowned, Off-, Off-Broadway venue Theater for the New City through Nov. 20 in a powerful production.

Plays about the Holocaust can be preachy, especially if phrases such as “Never Forget” are repeated throughout.

But with “From Silence,” Lucas has written a layered, original, timely play that vividly illustrates the effects of Gold’s past experiences on not just herself, but her daughter and granddaughter.

Silence can be golden and serene, but in the girl and her mother’s case, it’s dark and traumatic. It passes trauma from one generation to the next.

Gold’s daughter, Deborah, grew up not understanding why her mother avoided situations, such as taking an elevator. Young Deborah also couldn’t comprehend why her mother insisted she not wear a striped uniform bearing a number.

As she got older, Deborah’s marriage suffered, and she was plagued by anxiety. Likewise, Elaina, who learns about the Holocaust in Hebrew School, realizes her grandmother lived during that time and experiences nightmares.

Still, as hard as Elaina and Deborah try to convince Esther to speak about her concentration camp imprisonment, the older woman remains mum. That is, until after Elaina finds herself in a grave situation that could easily end with the unthinkable.

One reason the play is so touching is that you can’t help but feel for Esther; ironically, she’s doing her family more harm than good by not talking to them about her experiences.

Esther faces a strong inner conflict: Does she open up and begin the healing process for her closest relatives or keep silent and spare herself from agony -- but leave her loved ones hurting in the process?

While “From Silence” deals with the Holocaust, it also can provoke thought and discussion about Post-Traumatic Stress Disorder, the generational gap and how we don’t seem to learn from past tragedies.

“This is America!” Esther exclaims at one point. “What is happening to this country?”

“I ask myself the same thing, every day,” replies another character.

The refrain, no doubt, sounds familiar to anyone who’s been following current events.

The exchange was prompted by a comment from a character that bomb threats and gunman attacks are so prevalent today. The play takes place, in part, in New Jersey during 2015, just a year ago.

Lucas’ play doesn’t involve a linear plot. The action jumps back and forth between the past and the present, from the 1940s to the 1960s and different moments during the present. The action shifts between past and present so much that at times, it’s hard to follow. On the other hand, this frequent jumping between past and present can symbolically suggest the dizzying state in which Deborah, Esther and Elaina find themselves. During the part of the play set in 2015, Elaina is at Hebrew school at her temple, when a lock down is ordered; terrorists may or may not be trying to kill Elaina and the other children.

The situation in which the children find themselves mirrors, in some ways, the ordeal Esther experienced during the Holocaust. At one point in the play, it’s noted that Elaina tried to hide in small, claustrophobic spaces during the lockdown – not unlike what her grandmother had to do at times to survive the Nazi rule.

The potential terrorist situation at Elaina’s Hebrew school is the play’s inciting incident that leads her grandmother on a dizzying journey, in her mind, back to her days spent at a concentration camp for women. Esther’s mind also takes her back to the days when Deborah was a youngster and the things she said, influenced by her Holocaust experience. All this rising action leads to a heartfelt climax and resolution.

The fact that Esther is haunted by the past is reinforced by the inclusion of two characters: a child version of herself and a younger adult version serve as voices in her head. They speak the subtext behind some of Esther’s words and encourage or discourage her from revealing her past to her family. These “voices” are almost like spectral figures, following her around, causing Esther agony as she tries to blot out the voices in her head.

As the “voices” Shannon Harrington (Young Esther) and Krystal Rowley (Adult Esther) alternate between facial expressions of anguish and warning to Esther. One of the problems in the production is that at times, they stand around without expressing or saying much.

Another issue arises during a scene when Esther is praying aloud. It’s nearly pitch black on-stage; it would be nice to see her facial expressions.

The actors offer mostly strong performances.
As Deborah, Audrey Heffernan Meyer is particularly strong at the beginning, when she frantically enters her mother’s apartment to break the news about Elaina’s situation. Worry is etched into Meyer’s face and there’s an uncontrolled aura of panic around the character. Meyer makes Deborah’s pleading to her mother sound authentic and vulnerable. She conveys love to the older woman, as well as a tenderness to Elaina (a spirited Jessie Gollin).

Karen Lynn Gorney, who you might remember from the 1977 movie “Saturday Night Fever” as the girl who said “no” to John Travolta’s character, plays Esther. She conveys a rigidness, firmness and strong-willed aura, but never a meanness that would make her unlikable. Watching her, you sense an inner strength and mental toughness that might help explain how Esther survived the Holocaust. While Gorney’s Esther is firm, she’s loving in a tender manner toward Deborah and Elaina.

The comfort and protection of family is keenly felt at the end, thanks to the performers and director Peter Zachari’s sensitive, detailed direction and staging.

The scenic design is by Wilberth Gonzalez, who also designed the period costumes, many of which are appropriately dark and dirt-smeared for the Holocaust scenes.

Gonzalez deftly differentiates Esther’s area of the family’s home (neat and tidy) with Elaina’s messy space. Scenes set in flashback during the Holocaust take place in a bleak-looking area upstage with bar-like structures that suggest a jail or prison. The blackness of the theater space also lends a haunting, grave aura to the production.

Theater For The New City’s production doesn’t include a ticking clock, but it might as well: Holocaust survivors are dying at a pace faster than they can relate their experiences to others. As you watch the play, you feel a sense of urgency.

Esther may not have much longer to live. And with her granddaughter caught in a situation that may kill her, will Esther be able (and willing) to talk to Elaina about her past before it’s too late?