Bull in a China Shop By Bryna Turner 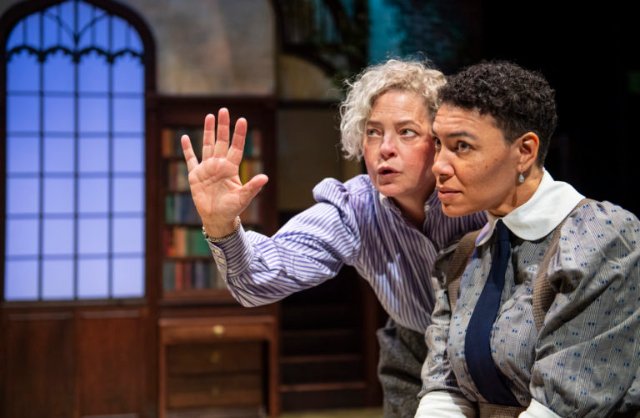 As a graduate of Mount Holyoke College and a burgeoning playwright focused on themes concerning queer women, Bryna Turner was surprised to first learn of Mary Wooley through an Instagram posting in 2016. Hiding in plain sight was this transformative model who not only radically changed the mission of her college, but was the sole female delegate to European peace meetings scheduled with Hitler and was a representative of women’s issues on a six-month mission to China. Inspired by Wooley’s story, Turner penned an informative and entertaining play about her four decades as Mount Holyoke’s president, starting in 1899. Aurora Theatre has created a rewarding and winning production of it.

.Mary Wooley was dedicated to the proposition of gender equality. In transitioning Mount Holyoke, the oldest of the Seven Sister schools, from a seminary for women to a college promoting higher aspirations for women, she reduced required attendance at religious services from daily to weekly; eliminated domestic skills from the curriculum; and retired older male faculty, replacing them with younger women. These sea changes that were on her agenda from the start make one wonder why she was chosen as president of a conservative institution. But perhaps her most controversial act was to appoint her young lover Jeannette Marks as head of the English department. Although the two never shared public displays of affection, their “Boston marriage” was widely known. Oh – and coincidentally, they did come to Holyoke from – Boston.

What surprises about Bull in a China Shop is the tone that the playwright adopts, despite the fact that it is a biographical sketch focused on serious events. While it could be classified as a high-brow dramedy, with anticipated audience smiles and knowing chuckles, Turner calls it a comedy. And a talented ensemble of all-female actors induces full-throated peals of laughter. The other tone decision that works is using modern language. In real life, Wooley was known for a salty tongue, but in the play, she and Marks throw f*** bombs around like rice at a wedding recessional.

Stacy Ross plays the confident Wooley with confidence, exuding a breezy and sometimes dismissive air. Wooley’s courage and accomplishments demand the highest admiration. Yet, she also (according to the script) suffers an undesirable Trumpian trait.  Like him, she accuses another of shortcomings that she’s much more guilty of. In her relationship with Marks, in which the latter becomes the “trailing spouse,” it is all about Wooley’s priorities. Yet whenever Marks seeks to pursue goals inconsistent with the older woman’s, Wooley’s warm and loving affection for Marks turns icy. Ross as Wooley browbeats the younger woman for supposedly possessing the very selfishness that is Wooley’s hallmark in their relationship.

Leontyne Mbele-Mbong enthusiastically portrays Jeannette Marks with a fine mix of contradiction – charming and vibrant in private, though steely in public and fiercely committed to her ideals. Although she largely sublimates her personal objectives to those of Wooley, the two women clash over some goals for women and society, particularly in the matter of women’s suffrage. In large measure, they anticipate the clash in today’s Democratic party. Even when long term objectives are agreed upon, progressives take the urgency approach, while the traditional wing shows more patience. Similarly, Wooley’s years in the power structure inform her willingness to look for opportunity to affect profound change over time.

As a series of brief vignettes, the action moves at a fast pace for 85 minutes. This virtue for comedy impedes any gripping drama that might otherwise develop. Also, only five characters appear. Thus, all of the conflict between Wooley and the college power structures such as board and donors is delivered through a messenger, Dean Welsh, who administratively is inferior to Wooley, but superior to Marks. Somehow the threats that the protagonists face seem blunted when they lack face-to-face challenges. Welsh is played in dispassionate and dour fashion by Mia Tagano, whose disapproval of Wooley and Marks is sometimes apparent. At other times, Tagano’s studied opaqueness leaves one wondering.

As if the two leads don’t deliver plenty of humorous quips, the remaining two characters are predominantly comic. In a small role, Rebecca Schweitzer is Felicity, the supportive but ditsy philosophy professor and sometimes housemate of Marks. The greatest hilarity, however, comes from Jasmine Milan Williams, playing a student named Pearl. She ignites the scene every time she enters the stage. As the sycophantic president of a secret student society that honors the lovers, she effuses with smiling, wide-eyed, callow enthusiasm. One soliloquy she delivers at full-bore, fevered pitch received a huge spontaneous applause as she left the stage on opening night.

Bull in the China Shop, written by Bryna Turner, is produced by Aurora Theatre and plays on its stage at 2081 Addison Street, Berkeley, CA through December 8, 2019.