Benfactors at NY's The Spoon Theatre 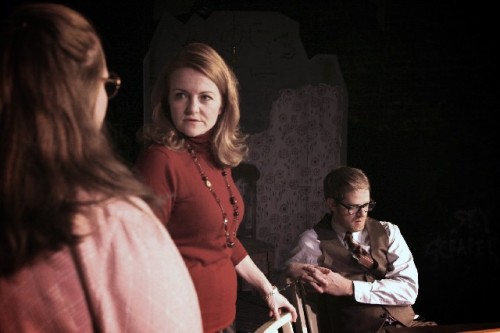 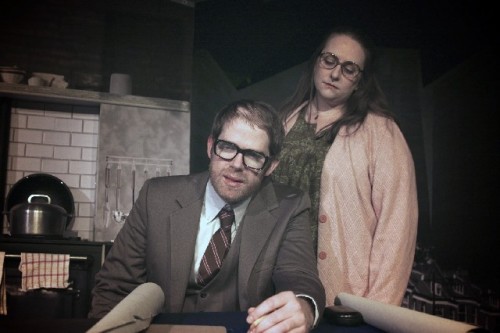 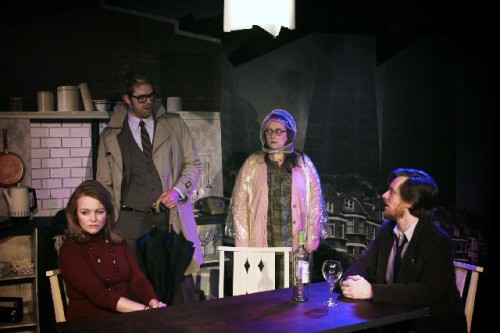 Ever since they opened their doors six years ago, Retro Productions, one of  Off-Off Broadway’s best kept secrets, has been wowing those in the know with one stellar production after another. Judging from their current revival of Michael Frayn’s Benefactors (1984), mounted at the very intimate 40-seat Spoon Theatre, Retro just keeps getting better and better. Benefactors truly is one of the best acted, best directed plays that I’ve seen this season. Sadly, it will be closing this Saturday. It should be an unlimited run, but alas, like many wonderful Off-Off Broadway productions, never to be seen by many, it is a 12 performance showcase production. But who knows, theatrical miracles have been known to happen. Maybe it will have a second life with the same actors hopefully.

For a theatre company whose mission is to “tell good theatrical stories which have an historical perspective, with an emphasis on the twentieth century” you can’t get much better than English playwright Michael Frayn. Like his fellow countryman Tom Stoppard – it must be in the water - Frayn knows how to build a mesmerizing, idea-filled, historically based play, with psychologically complex characters and fast-flowing words. In his play Copenhagen (1998) Frayn speculated on what might have transpired during a 1941 meeting between the Danish physicist Niels Bohr and German physicist Werner Heisenberg. Denmark is under German occupation and Heisenberg may or may not be working on the development of an atomic bomb. It was an intellectual thriller. In Democracy (2003), set in Berlin during the 60s, he examined the various decisions West German chancellor Will Brandt had to make about exposing the East German Communist spy Günter Guillaume who worked as his secretary.

In Benefactors, utilizing the same ingenious architectonic construction techniques, Frayn fashioned this 4 character play, like an architect planning a building, the irony being that the play’s action, though mostly taking place around Jack and Rebecca Cunningham’s cleverly rendered postage stamp size kitchen table set, concerns an idealistic architect in the throes of planning to replace the housing units in a run down slum section of London with two skyscrapers. Outwardly the plot of Benefactors seems simple. An architect wants to build two skyscrapers and everybody around him, in the house and out, reacts to his plans. However, it is anything but simple, for the play, with its none too pretty look at the reality of human relationships and behavior, touches upon the nature of good an evil, the price of political and psychological change, and the relationship of individuals to the social state.

Based lightly on actual history, the play takes place in London in the late 1960’s when the modern high rise was being introduced into the city. The protagonist David (Matthew Semler), a successful architect on his way up, is busy designing a two-towered skyscraper redevelopment project for a South London slum neighborhood known as Basuto Road. Though he is surrounded by his wife Jane (Kristen Vaughan), his two kids that we never see, along with their only two friends, married couple, Colin (David Ian Lee) and Sheila (Heather E. Cunningham) and their two kids who we also never see but only hear about, they all appear to be little more than accessories to his tightly held dreams. The story, furthered along with revelatory flashback monologues, some 10 years after the events, by the women in the first act, and the men in the second, and fervid encounters of all stripes, follows the complicated ups and downs of  David’s Basuto Road project, as well as the tumultuous life changes that each of the characters go through on a daily basis.

Idealistic from the beginning, David’s dream of “building the new world we’re all going to be living in” soon begins a meltdown. As any architect knows the battle to get any building built is an uphill one. Before you can say Frank Lloyd Wright David’s project is being trounced by oppositional forces from all sides. City agencies, as well as the working class beneficiaries of his scheme who have no interest in living in the “New York-style skyscrapers” begin to weigh in. Also against his Basuto Road project, vehemently at that, is his friend Colin – now the enemy - who eventually joins the project’s protestors, and very possibly his wife Jane who works for a building preservation trust fund. Faced with what seems to be daily architectural nightmares – a swamp (or is it a sewer or both?) is discovered underneath the very spot where the buildings are to be erected, and squatters are inhabiting many of the deserted buildings – an exasperated David can’t help but cry out in despair, “In the end, it’s not art, it mathematics.”

Sandwiched in between David’s continual meetings with various city officials and the long “thinking walks” that he likes to take, mostly alone, later with Sheila who he eventually hires as his secretary, we get to spend time watching Jane and Sheila, in what appears to be, at least initially, until they are fully dependent on each other, a one-way bond, that of the insecure and very needy Shiela to her benefactress Jane. At one point, Colin accuses his wife of being in love with Jane. Later on in the play, he accuses Sheila of being in love with David. In both cases he just may be right. We also get to observe, in kaleidoscopic detail, the ever-changing relationships of each of the characters, to their spouses, to each other, as well as to themselves.

Each of the four actors, finely directed by Peter Zinn, turn in beautifully modulated performances. Though occasionally at the beginning of the play some of the English accents were slipping, corrections were made soon enough. Kristen Vaughn, as the sensitive, seemingly well-grounded, architect’s wife, struck the just right balance between cheerfully outgoing and a sensitive and deeply concerned wife and friend.  It was a revelation to see her subtly reveal an inner darkness as well as a hint of sexual attraction, both of which she secretly shares with Colin, menacingly played, with a dangerous and precisely aimed wit, by David Ian Lee. As the loveless, and lovesick Sheila, Heather E. Cunningham, is called upon to make the biggest character changes, from warm to cold, from strong to weak, from hysterical to giddy, to needy to independent. Always hitting the right note, from vocal to facial expressions, to body language, Cunningham is a joy to watch.

Though the play ostensibly revolves around the doings of David as intelligently played by Matthew Semler, the part as written, keeps Semler mostly aloof, and rightly so, from the other characters. Like the writer Trigorin in Chekov’s The Seagull, his David is poignantly tethered to his own ideas and little else seems to matter. The role of is the most difficult to inhabit as David has to both be there and not be there at the same time. Act I finds him running on and off the stage at every given opportunity busily tending to what Colin nastily refers to as “the building of his tombstone.” By Act II, when David ceases to be the “bemused natural observer” of the conflicts around him and starts to become their victim, Semler’s performance reaches a brilliant pitch. By the end of the play, David’s once magical vision of saving humanity, along with his zest for life, seems to have been sliced in half. Robbed of his dreams, reduced to a state of resignation, the light has gone out of Semler’s his eyes. We are left thinking about our own mortality.