Wicked Dark and Brisk in Glostah

Another Letter on the Arts from Cape Ann 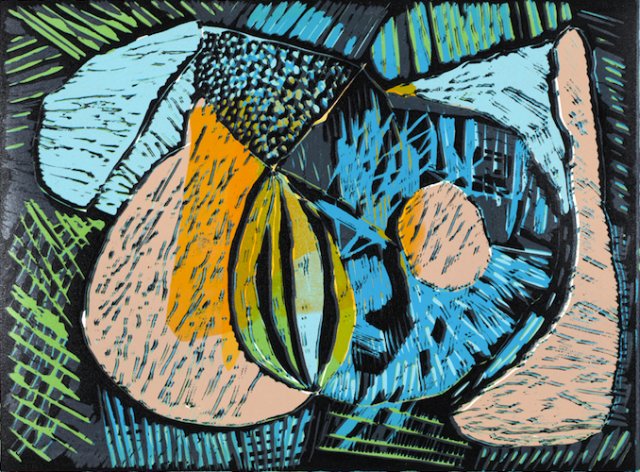 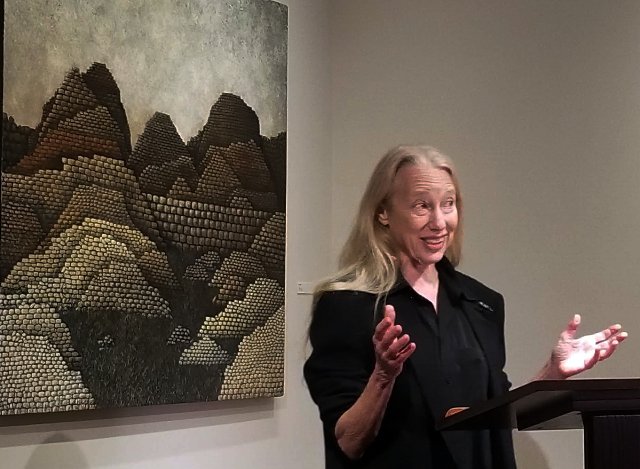 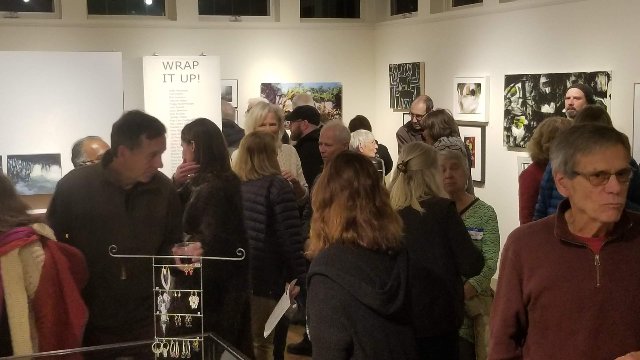 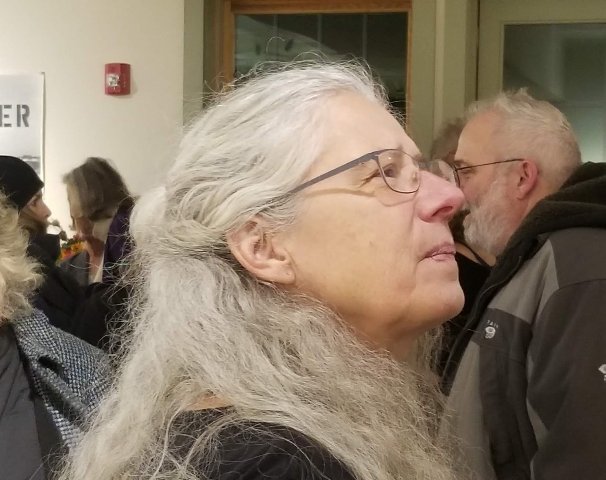 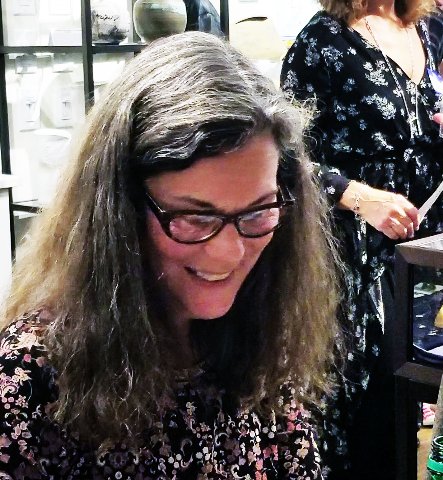 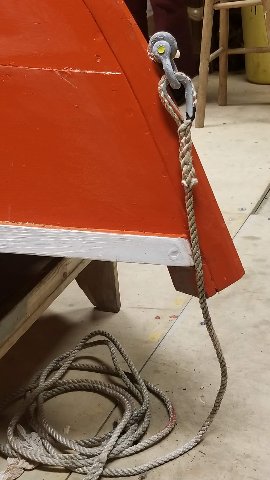 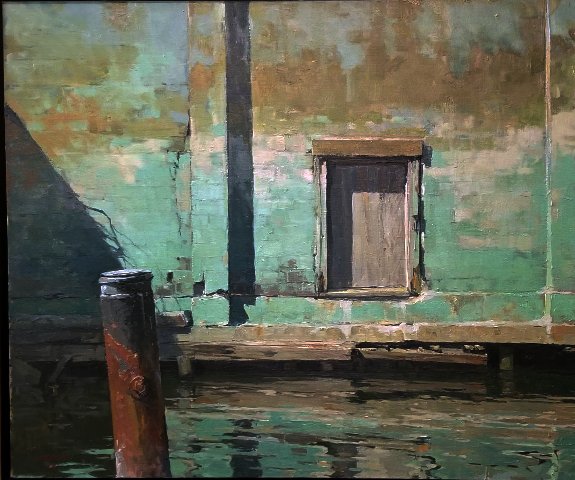 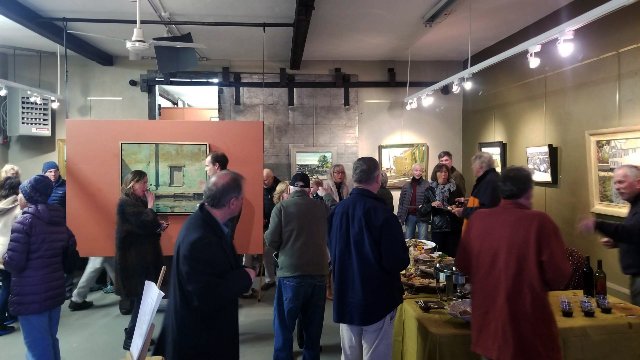 It’s getting wicked dark and the brisk wind off the water propels one to move quickly down Main and Rogers Street.

Saturday, November 10th, Susan Erony set the pace with a 1pm lecture at the Trident Gallery. Seats were improvised as the crowd swelled. They came to hear Erony describe her political, temporal and psychic, journey from concept to execution of paintings and works in her current show, Lost in America on view at the Trident through November 25.

Susan, born in ’49 is my age – both of us from Brookline but she seems to be of the old country. Brought up in a household of socially conscious Russian immigrant grandparents and a cautious refugee father, pain of the world wars seeped into Susan’s DNA. Her reflections on Armistice Day and Germany after WWll were told like a personal story. The image of post-war Berlin women’s work brigades, washing and restoring bricks was the inspiration for her two-year endeavor, Rubble. After the painstaking painting of individual bricks, she found herself filling the space between with greenery. Nature persists waiting for the right conditions to reassert. That seems to be Erony’s belief and maybe silent prayer. When we continue at destroying ourselves and humanity paints itself out of the picture, beauty and aesthetics will survive. https://susanerony.com/

First and foremost, Erony is a visual artist but a rare one, who is adept at speaking publically. Her talk carried us from the outer reaches of the cosmos to the depths of her soul. You could sense the droning of a protest march in the background as Erony provoked us to wake up. In a time of divided households and a divided nation, we share the experience of being lost in America. Included is a link to her artist’s talk from 2017.  https://trident.gallery/presents/susan-erony-towers-conversation/

It was a totally different vibe on Rogers Street at the Jeff Weaver studio and gallery reception. Working in the American Realist tradition, Weaver a Boston Museum School graduate, has embraced Gloucester from the scenic to the nitty gritty. Weaver has a dedicated following of collectors and there were plenty of red dots to prove the point. http://www.jeffweaverfineart.com/index.php

Often my daughter, Sarah joins me for these gallery crawls. Between shows on Saturday, she took the lead and suggested we pay a visit to Gino on the waterfront. Gino Mondell designs, restores and builds boats at the Dory shop at Harbor Loop. It’s quiet down there now with the schooners put to bed and the tourists safely home. But when Saturday rolls around Gino’s shop is the hottest place in town. Sausages sizzle in the iron fry pan on the wood stove and the dory morphs into a smorgasbord laden with treats. The beer and vino rosso flow like the quiet tide down at the harbor.

Guitars, fiddles, boxed instruments and melodious voices lighten the spirit. Aging folks whose hearts still burn and eyes twinkle laugh as they search for the lyrics. It’s a little piece of heaven down there. Sarah busies herself attempting to bring order to Gino’s workbench. They are pals after all.

Following  the musical interlude, we headed north to Lanesville for the final blowout of the Flatrocks Gallery and their group show, “Wrap it Up! 2”. The gallery is open weekends through December 16. The curators Ann Marie Crotty and Cynthia Roth would gladly open up upon request.

For ten years, Flatrocks has been the home and show place to the work of sixty-six contemporary artists. One has to wonder how and where their work will be seen and what projects await the capable hands of Cynthia Roth and Ann Marie Crotty. Stay tuned for the next chapter.

It takes courage to open your studio to visitors as artists tend to be introverted and solitary in their work. The artists of 34 Mt Pleasant Ave. will host an open house at their studios this weekend.  The brave souls are; John Cameron, Ann Conneman, Karl Frank, Elizabeth Gauthier, Brenda Malloy, Mary Rhinelander and Judy Robinson-Cox.

From the press release of the Jane Deering Gallery:

The gallery is pleased to present The Art of Geoffrey Bayliss opening November 10th with a reception November 17th from 1-4pm, 19 Pleasant Street, Gloucester MA.

Bayliss is a versatile, formidable artist with a command of several media.   Early abstract paintings are bold and vibrant. Ink drawings inform through disciplined mark-making. Monotypes reveal both subtlety and force.  Bayliss understands process. No mark is superfluous. He relies on the strength of the essential.

We can’t leave Gloucester without acknowledging Charles Olson once again. Here is a link to the Henry Ferrini video of Ed Sanders at the wheel of the Cape Ann Museum for the ninth annual Charles Olson lecture. https://youtu.be/GfJrmqN3MdM