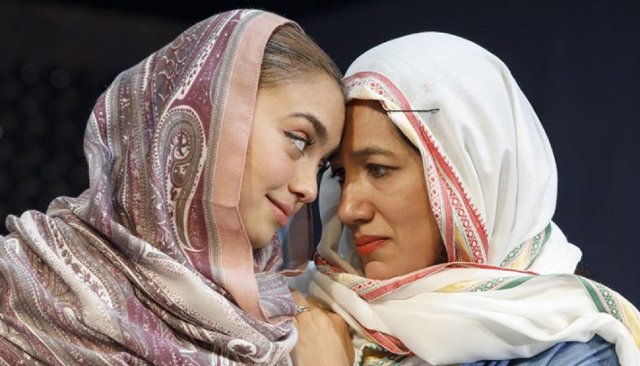 In a New York Times interview, the playwright admits that the work is essentially an expanded autobiography. As it opens, an almost-30-year-old, single Punjabi-American woman is talking to herself while she’s digging into fistfuls of dirt in the backyard. For reasons that will be revealed later, her “talk” is in pirate-speak; it’s loaded with phrases like “me treasure” and “arrrrrgh.” Eventually, she unearths a tiny white marble elephant that turns out to be a parting gift from her brother, who left the family fold and eventually died.

Now the young woman (played by Shazi Raja) wants to forge her own path; in this case, it means leaving her hometown of Raymond, Wisconsin and opening a bar in the college town of Madison. It’s only an hour’s drive away from home, but her parents fear that, while away from the family, she might fall victim to a similar fate the befell her brother.

The oppositional themes of breaking free from the past, and honoring the past, are explored at length here. As Basminder (or “Boz,” to her family) summons the courage to announce her business plans in Madison, the family is preparing for her brother’s wedding. Iggy (Sathya Sridharan) is marrying Punjabi girlfriend Lovi (Lipica Shah) in a traditional Punjabi ceremony. They seem very much in love.

Iggy is basically a goofball with arrested emotional development. He provides much of the play’s humor, along with his best friend and equally juvenile Vishal (Nik Sadhnani). Boz is close to her brother and wants to be present to witness his marriage. Simultaneously, she is looking forward to getting away from Vishual, her ex-boyfriend.

Boz’s parents seem very liberal. Content in their own arranged marriage, they put no pressure on Boz to marry Vishal and settle down. Deepa, the mother (Purva Bedi), is nearly as important a character as Boz is. She shares gossip and worries about her children with a close friend, Simran (Angel Desai). There’s also an ancient, Punjabi-speaking mother-in-law who freely doles out marital advice to the engaged couple. This is hysterically funny, as translated by her son, Sunny (Alok Tewari).

As all this family business unfolds, Boz and her father rekindle the memory of a long-ago ancestor who was a pirate. He was thought to have smuggled beer from the high seas to Calcutta and Essex. We find out that, while digging in the dirt as the play begins, Boz essentially was summoning her inner pirate. Like “Brown Beard,” as the questionable relation was called, Boz yearns for a life that is free of convention and routine.

The pirate metaphor “emerges” several times in the play, to the point where the entire enterprise almost becomes more like a fable than a family drama. Those familiar with Backhaus’ 2015 Off-Broadway hit, Men in Boats, will see some similarities between the team of explorers in “Boats” and the “pirate” analogies witnessed here.

The play takes a sudden turn when Boz opens her bar and in walks Tim (Nate Miller). He’s a casually dressed, clueless slacker who makes several racist clichés. When he asks where Boz is from, he is puzzled when she says she is from Wisconsin. In fact, she lets him know that she isn’t even the firstborn generation from Wisconsin, as her parents were raised here (this is true in real life). “We root for the (Green Bay) Packers and everything,” she says, exasperated. After a few more conversational volleys, the weary Boz says she is exasperated by the fact that her life “is a series of teaching moments.” The deflated Tim tries to redeem himself by complimenting the bar’s location, its beer selection, etc. He offers to bring his friends over to try the place out.

A sudden turn of events (inspired by the real-life 2012 shooting at a Sikh temple in Milwaukee) ends up changing Boz’s life forever. She wants to become the dutiful daughter to take care of her mother in the wake of a senseless tragedy.

While India Pale Ale has some interesting elements, it is by no means a masterpiece. Some of the sequences seem clumsily inserted, and the play has a disjointed feel to it. The cast is excellent overall, with special mention going to Shazi Raja as the independent Boz. The play’s set is mostly minimal, but clever lighting effects help to create Boz’s home, her family’s place of worship, and the bar in Madison. Costumes put the cast in extravagantly dressed outfits as pirates, or in traditional Punjabi garb.

While no longer playing in Manhattan, one wouldn’t be surprised to see India Pale Ale making the round of the regional theater scene soon. Some of its tantalizing elements, including a female playwright telling the story of old traditions and new opportunities from a non-English point of view, seem to be right on target.

Anne Siegel is a member of the American Theatre Critics Association. She writes from Milwaukee, Wisconsin.