Philip Glass's In the Penal Colony 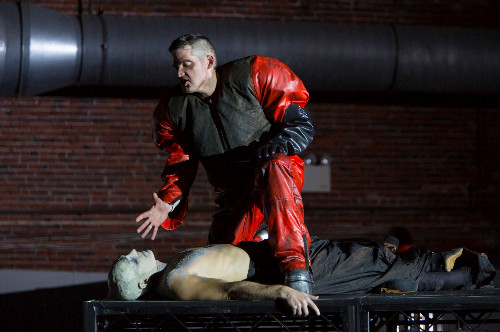 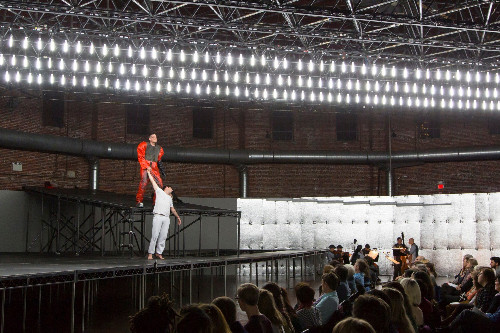 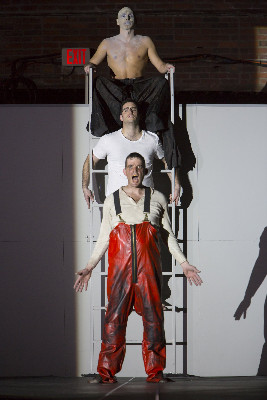 The three cast members, from top, Yuri Yanowsky as the Prisoner, tenor Neal Ferreira as the Visitor, David McFerrin as the Officer, in the BLO's "In the Penal Colony" 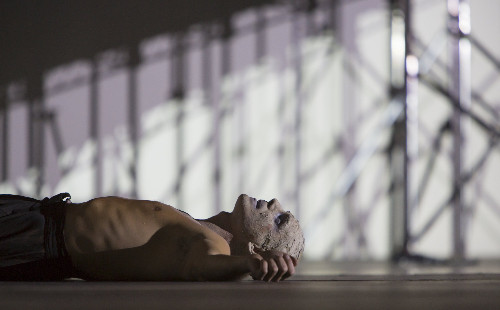 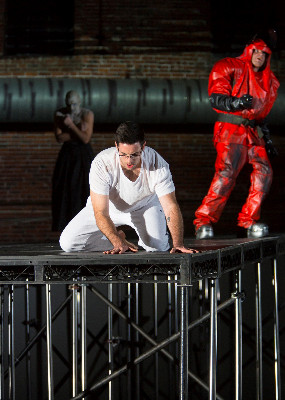 the three principals, dancer Yuri Yanowsky, tenor Neal Ferreira and baritone David McFerrin during a dramatic moment of Glass's "In the Penal Colony"

There are certain artists whose very names call up a world-view. Dalí brings to mind images of melting clocks. Magritte fills the mind with images of a man in a bowler hat, a pipe that is not pipe and a giant green apple that fills a room from edge to edge.

In the world of literature the name Kafka conjures a world of bureaucratic irrationality that feeds a totalitarianism in which summary judgment and mechanized death, the punishment for crimes never revealed to those tried, are made to seem normal. Not to mention a man who wakes up one morning as a giant cockroach.

Philip Glass’s 2000 Opera, based on Kafka’s 1914 story, is a chilling fable about a tropical prison colony in which prisoners find out what their crime is only as they die from it being inscribed on their bodies by an ominous machine. It presciently suggests a world of extradition and torture we are all too familiar with. Although “The Bourne Trilogy” boasts of tours of scenic world capitals, fast editing and a Pop music soundtrack, it tracks a world in which ruthless masters do whatever it takes to break a man that I suspect Kafka would immediately recognize. (Jason Bourne’s heroics as played by Matt Damon in his Howdy Doody mode might seem a little too all-American optimistic for him, however.) In any case, after the recent events in Egypt, Beirut and Paris – and who knows where else before this gets posted - I also suspect we’ll be getting a lot more familiar with such issues, thought to have been laid to rest by the Obama administration’s refusal to be drawn into the Mideast quagmire, a pandora’s box opened by his predecessor George “Dubya” Bush and his team of war-mongering advisors.

In his short one-act opera – it clocks in at a little more than 80-minutes – Glass keeps the chill in the story, his familiar pulsating, motoric music a perfect accompaniment for the crime, judgment and execution related obliquely in Kafka’s tale. Glass has written some 26-odd operas or opera-like compositions, and his operas are produced more than those of any other living composer. “In the Penal Colony,” probably because of its length and its limited production demands – only two singing roles and two silent ones (rolled into one in the BLO’s production) – making it easier to undertake than his more epic works, is one of the most often produced.

But with it you get the full Glass as well as the full Kafka.

In its annual off-site “Annex” production - meaning a more contemporary, more adventurous work than those produced in its main house, the Shubert Theatre, which as everyone by now knows, the BLO is vacating next year, making all of its future productions “off-site” in a way – the BLO once again finds freedom in not having to produce classics of the operatic literature everyone has seen before, even if only via an HD transmission from the Met in movie theaters, most often better done and better sung. Whether by design or because of the relatively short works available, the Annex productions have tended toward the dystopian. “In the Penal Colony,” the seventh in the series, is at least the fourth that presents a world out of joint, which rightly fits the mood of the times.

The Cyclorama, originally built in the 1880s to house a gigantic cyclorama of the Battle of Gettysburg, which has been used for opera only once or twice before, was an inspired choice for a venue. A raw but awesome space, it is acoustically unwelcoming to unmiked music, but acoustician Carl Rosenberg working with set designer Julia Noulin-Mérat largely solved the problem, padding its walls with reflective panels and placing sound-absorbent pillows on the folding chairs to make the sound more lively and warmer, not to mention more comfortable. There were only a couple of dead spots, which stage director R.B. Schlather wisely kept his singers away from for much of the action. Although the Cyclorama is not the answer to the BLO’s long-term need for a real opera house, it should be considered by the company as an alternative venue, especially for its Annex productions, in the future.

The production was largely admirable, but it was not without its problems. Like Kafka’s prose, it lagged and sagged. (Has anyone ever read “Amerika” from start to finish?) The concept is brilliant, clairvoyant, but the execution, flawed. Kafka couldn’t be bothered, or didn’t have the skills, to fill out his ideas, which resonate more today than they did at the time he wrote them. (“Metamorphosis” being the great exception.) Glass had to deal with what he was dealt, and the production team and the performers had to deal with what Glass gave them. They did the best they could. It was a long 80-minutes.

The stasis inherent in the work, the story and the opera, challenged stage director R.B. Schlather, who sometimes rose to the occasion and other times didn’t. It was smart to combine the two non-singing roles and to cast former Boston Ballet principal dancer Yury Yanowsky in the part. With a beautiful bared upper torso, a shaved head slathered with white paint and a long billowing black skirt, he resembled both a Butoh dancer and a modern primitive. His moves were feral and articulate even though he didn’t sing a note. And it almost seemed foreordained that he would be the object of homoerotic desire. At one moment, he and the Visitor nearly kiss.

But since no choreographer is credited, Schlather has to take the blame for the listless and jerky movement he created for the Visitor, whom he made in one scene move spastically along the space’s walls. The problem was given to him by Glass, but he didn’t find a solution to the longueurs built into the piece. The shame is that Neal Ferreira, who plays the Visitor, the witness to the failed torture depicted, has demonstrated a real ability to move in other BLO productions. His rubbery moves as Monostatos in the BLO’s failed production of “The Magic Flute” provided one of the few moments of life in that misguided production.

Noulin-Mérat’s set, a metal pipe construction the agile singers climbed over as if it were a jungle gym, was simple and efficient. Lighting designer Jax Messenger created ominous contrasts between dark and light and threw shilhouettes of the characters against the backdrop that underlined the work’s alienation. Terese Wadden’s costumes were effective: a white t-shirt and pants and horn-rimmed glasses for the Visitor, a dirty red hazmat suit for the Officer/Executioner and the modern primitive outfit for the Man/Prisoner.

The cast and string quintet, led by Ryan Turner, that formed the orchestra – were excellent. That both Ferreira and David McFerrin are alumni of the BLO’s Emerging Artist program testifies to the success of that training system. (Schlather is as well.) We’ve watched the two of them along with several of their peers in a range of small roles over the years. In this Annex Production they showed that they could carry an entire opera.

Glass’s music is emotionally muted, although Ferreira, a visitor from outside who has still a shred of humanity in him, finds lyricism in the role whenever he can, his sweet tenor suggesting his bewilderment at the torture session he has been invited to witness. Of course, as a representative of liberalism, the Visitor is a wimp, lacking all conviction, as Yeats would have it. Toward the conclusion of the work, he states, “I oppose this procedure, but I will not intervene.”

In his orchestrations, Glass leans toward lyricism as well. In an early instrumental interlude, Glass seems to be channeling the more lyrical side of the Second Viennese School, particularly Alban Berg, which places his opera in the time the original story was created.

At first McFerrin, as the robotic if slightly hysterical Officer/Executioner, sings without affect. He brags that his torture machine is “efficient” – we will see during the production that it is not – and his singing is merely efficient as well. But when he sings longingly of the Old Commander, who has been recently replaced, his baritone turns tender-hearted.

Both singers sang with extraordinary attention to the text, enunciating every word, every syllable making the supertitles superfluous.

Still, the production – maybe the work itself – was ineffective. Yes, it was intellectually chilling but it left me emotionally unmoved, events in the real world making a deeper call to the emotions.