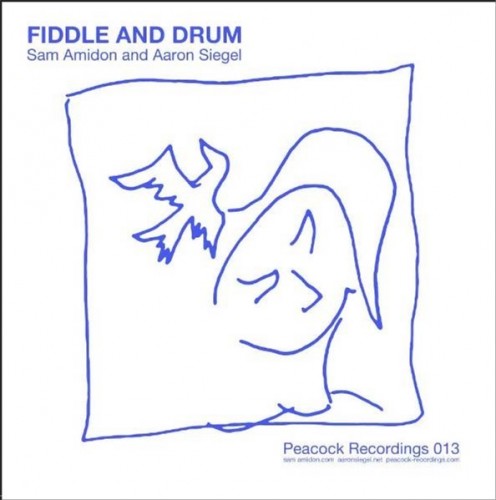 Fiddleanddrum Amidon integrates drawing, videography and storytelling in his performance. 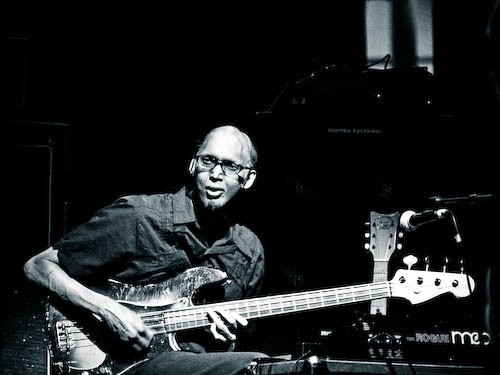 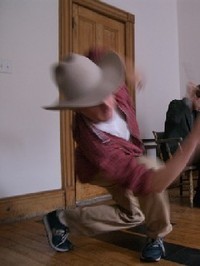 A loose horse in the valley, Lord, the time is drawing nigh. 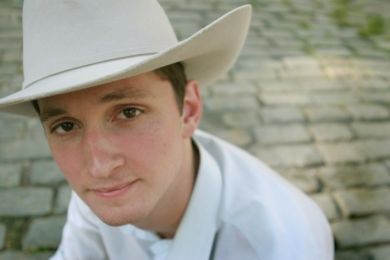 If the imaginary friend of a friend were to wake up one day, put on the tee shirt and blue jeans of a banjo virtuoso and take to hollering the way a brook trout takes to ichthyology, the evidence conclusively demonstrated last night at Mass MoCA's Club B-10 that

b) it feels good to him to be luminous

2. while picking and/or bowing the strings of whichever instrument he damn well pleases in any style he pleases and to play, tell, project his reportoire in any particular order, which in the end will have proved preordained, even providential, and not, as it might seem, merely happenstantial

3. as an offhand videographer/storyteller/cartoonist and

4. a loose horse in the valley.

B-10 is an intimate stage in a tall room, and Amidon flooded it with good-natured whimsy and the haunting voice of a gen-something folk balladeer in full command of his instruments, his idioms and the philosophical logic of the non-sequitur.

Backed up on a drum kit and an occasional electric guitar by Shahzad Ismaely's impeccable, grounding emphasis, Amidon charmed, perplexed and mystified his way through a set that fell together like notes tossed to the wind and condensed by weather patterns just beyond the event horizon.

What I mean by that is simply that by now, our collective attention deficit has a long memory, and the amalgamated anachronisms of a talent like Amidon rain down on us like a haunting of familiar angels diving, not in formation, but according to the nature of what ails us.

This is music we forgot we knew, ancestral lyrics written along the eastern spine of a nation that has never not been at war with itself nor yet fully abandoned its cobbled-together sense of brotherhood and the power of optimistic caterwauling in the face of eternity. "Isn't it good to know," we sing along, "that love is still alive?"

Amidon's pastiche performance now and again reminds us of Bob Dylan in a sweeter frame of mind, blithely prophesying a future that passed us by some time ago (circa 1984, he estimates), an Armageddon come and gone unrecognized, untelevized, its outcome pre-embedded in the history books.

He sings in a voice that has swum the current of angst and irony and come out somewhere on the other shore, where he takes up a position from which he mounts an aerial snowball attack on our cultural preconceptions. It's all in good fun--he is still, remember, a friend, perhaps a distant cousin of our own figmentation--but on occasion his wit steps out from behind the bunker of a native, north-Appalachian charm, and his aim can sting.

There is more to say--more will be said; he's just getting started--about the multiversal text-massaging stand-up installation that Amidon carts down from the hills of Brattleboro and unpacks from the closets of American history. This is not, for all its genre-indeterminate disregard for what ought to follow, an experimental kind of performance. This is a young man who has fully assimilated the music of his forebears, who honors them on the fly, has gone prodigal and returned with interest on his investment in the American birthright.