Spiraling Downward: From Minimal to Material 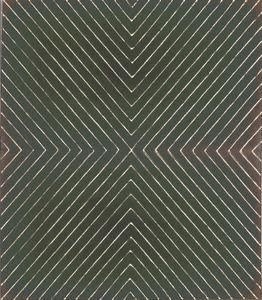 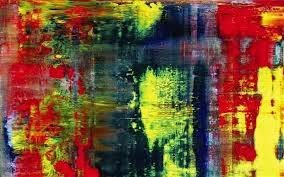 An abstract painting by Hans Richter. 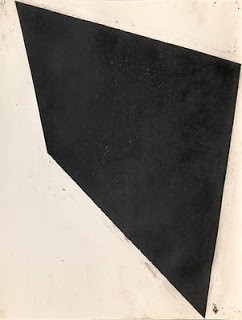 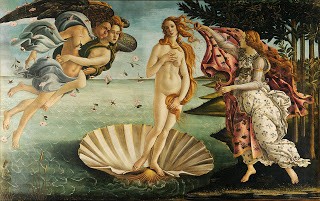 Primavera by the renasissance master Botticelli. 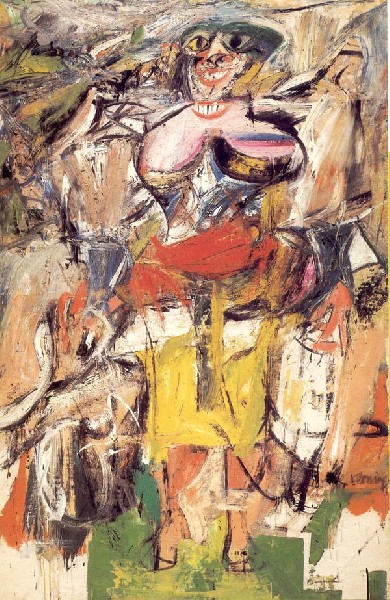 Woman on a Bicycle by de Kooning. 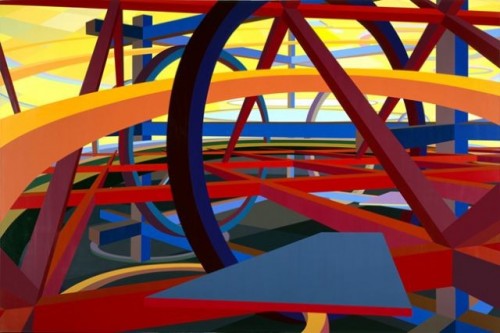 A painting by Al Held. 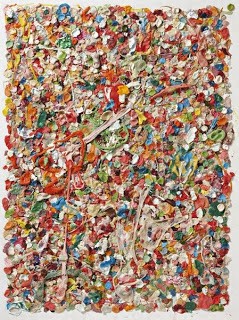 Robert Linsley has an interesting blog post on the notion of symmetry that got me thinking about several of the artists that he mentioned and an earlier blog on Stella who is his main man when it comes to who deserves to be in the pantheon of modern art. This is what I wrote on his blog:

I was thinking lately about Richter in terms of the timelessness of his work. By that I don’t mean the timelessness that would be used to describe the Neo-Platonism art of the early Renaissance but rather a lack of time. Haacke’s closed system has a sort of circular time. It is as you say a closed system that keeps repeating two different states of being. Similar to Stella’s Zambezi that you commented on in another post that to my eye draws the eye in and out in a constant repetition.

Richter’s painting is just one event that cannot circle back like Stella’s and although his works literally hold up, they risk and do at times descend into pure materiality. This embrace of the material results in what I would call art that is time poor to transpose a Heideggerian notion of world poor. This applies to the work of someone who appears to be a Richter neophyte, Dan Colen at Gagosian. I wrote about Richter and Stella on the occasion of last winter’s show of my work with Pollaro in Boston where I talk about the materiality of Richter but this notion of time is new and I think relevant to the understanding of his work.

It appears that Richter wants to stop time to impress one event on the viewer to such a degree that it eliminates any consideration of what came before or after. Paul Pollaro referred to it as a kind of neon blast. Gone is the role of the imagination, which might evoke memory, or the role of symbols that could point to an inner structure of consciousness that shapes the present. A TGV passing by so quickly you cannot even see it as a fixed entity. Serra’s charcoal drawings have that kind of powerful presence. They capture a one/two punch. It is a heightened version of push/pull.

To seal becoming with the character of being. That is the supreme Will to Power. This statement by Nietzsche might be on help in sorting out what these artists are after. I think what it means is the following: Will to impress emphatically the individual presence in such a way that its power eliminates any being part of the whole. IN the end there is the winner and the winner creates or pushes into the background or rather completely out of site the loser.

It is such a twisting of the original meaning of being and becoming: The source of Being in the Greek world was the one that existed beyond this world in a strange way was the origin of this world but was hidden from it and not of easy access. The world he live in is a world of becoming, of beings (small b) coming into existence and passing out of it. It is therefore a world of life and the decay of that life.

In the neoplatonic work of the Renaissance mystics like Ficino referred to this world as the sub-lunar world that the individual had no control over. Individuals were subject to the blind laws of the stars and pulled by the moon toward death. Some of the great works of art such as the birth of Venus by Botticelli were created as magical talismans to give the patrons such as the Medici’s power over such maladies as melancholia. According to the astrological notions of the time Melancholy was influenced by Saturn and the only antidote to it was to channel the goddess Venus. The goal was to get beyond (transcend) this sub-lunar world by accessing the divine powers.

This transcendence was not achieved through an act of will but by knowing the right prayers or alchemical formulas or in the case of art to use the right proportions, colors and geometrical shapes. In short a kind of knowing to achieve harmony. How different from Nietzsche’s formula. It opens the door to limitless assertion of power. It is not a statement that encourages relationships and harmonies but aggressive stopping of any alternative except that which is imposed by the Will to Power.

Self-assertion in the work of early Al Held pushes stuff into the background. This is also true in a lot of de Kooning’s work. At least there is a relationship in that on the canvas the oppressed shapes are still seen. Late de Kooning enters a realm of pure movement. Richter shows nothing eliminated. There is just this eternal present of pure movement.

But the risk and maybe this is rather the goal is that the assertion of will is not enough to hold up the material that is used to make the painting. This is the case of the work of Dan Coleen’s had a good laugh when it was pointed out to me by Paul Pollaro that this artists works in bubble gum and tar. My work has been described as looking like it was painted with bubblegum and Pollaro’s work is made with tar: One artist combining the materials of the both of us.

There is no event just the characteristics of the material sprinkled with irony as in tar and feather or the bubble gum that was harvested from public space in the city. Nietzsche would see this a weakness of the will, where there is not enough self-assertion to impress the self on becoming. But I would counter that this is a perverse sort of self-assertion like a child throwing a temper tantrum or getting attention by flinging its turds at the caregiver.

Reposted with permission of Martin Mugar.