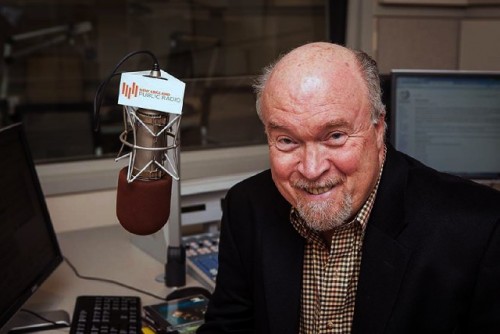 Mayor Domenic Sarno entered a reception at the Community Music School of Springfield (Mass.) on a Sunday afternoon, seeking out the guest of honor, Tom Reney . Upon finding him, the mayor extended his hand and, greeting Reney like an old friend, simply said, “Mr. Jazz.”

That appellation sums-up the attitude of the friends, family, and listeners to Reney’s long-standing, 5-night-a-week radio program, Jazz à la Mode. The program celebrated its 30th anniversary on Nov. 16, when 230 guests assembled in the cavernous digs of the music school, which is located in a former bank in the heart of downtown.

Jazz à la Mode has been a staple of WFCR-FM’s offerings –and Reney its only host-- since the station’s inception of jazz programming in 1984. The NPR affiliate, which operates under the aegis of New England Public Radio, recently relocated from the environs of Reney’s alma mater, the University of Massachusetts in Amherst, to become part of the downtown Springfield scene. The station’s signal is carried by about five repeaters in western New England and, for many, represents the only jazz within listening range.

Reney got his start in broadcasting with seven years on a community radio station in his native Worcester. He has carried a torch for jazz since he would sneak-in to jazz joints when he was too young to be admitted legally. That sort of passion and dedication, plus his natural curiosity, mellow voice and articulate speaking mannerisms, made him a natural for radio. Seeking to satisfy his passion for the music, he eschewed an expected career in the family business of civil engineering, surveying the jazz scene instead of highways, golf courses, and landscapes.

Reney’s 3-hour show is believed to be the only 5-night-a-week jazz radio program in New England, and is one of the longest-standing full-time jazz programs in the country. He credits NEPR CEO and General Manager Martin Miller for “maintaining a vision of public radio as a community service” for western New England.

WFCR’s programming day includes NPR news, plus local and syndicated classical music and locally produced jazz. In addition to Reney’s program, his weekend colleague Kari Njiiri has also been part of the scene since 1984.

Affirming NEPR’s commitment to jazz, CEO Miller said the 50-year-old station, a spinoff from Boston’s WGBH, is fundraising “to create an endowment for jazz and classical music, to ensure their future as part of the New England Public Radio programming mix.”

The station’s commitment comes from the founding principles of NPR. “Some think that the word ‘public’ in public radio is used because we rely on the public for financial support,” said Miller. “And while that's true, the visionaries who created public broadcasting used the word public because they believe public media should be like the public square - where all parts of our society can come together to share and express all of those elements of culture and ideas which make up our society. So, what better place for jazz than on public radio?”

Reney’s affable personality, on-air or off, serves his passion well. Never pompous, he is knowledgeable, and is always willing to share that knowledge. One gets the feeling that it would be cool to hang with him, even if he weren’t “Mr. Jazz.”

In expressing his gratitude to the jazz community, Reney thanked “everyone who’s ever made a record that I’ve played on Jazz à la Mode,” including “the countless musicians who commit themselves to the rigors of jazz with little prospect of major financial reward, and none of paid vacations.”

Among those who thanked Reney for his three decades of service, which include countless lectures, a popular blog, as well as commentaries and film screenings, were Congressman Richard Neal and Massachusetts state representative Steve Kulik, as well as Mayor Sarno. All three professed to be fans of Reney, each making knowledgeable reference to various experiences or anecdotes of their listening times (the politicians often returning home after late working sessions). The City of Springfield declared November 16th “Tom Reney Day;” the Commonwealth of Massachusetts also acknowledged his legendary standing in the broadcasting community; and, Rep. Neal inserted his acknowledgement into the Congressional Record, giving it national, and permanent, stature.

In a national broadcast scene where only 85 of 10,000 commercial stations, plus the 120 non-commercial stations, regularly offer jazz, WFCR’s commitment is noteworthy. Reney underscored that with his observation that “jazz on public radio is a distinction in and of itself.”

Or, as NEPR CEO Miller noted, “Our community has told us that jazz on public radio is important to our civic and cultural dialogue and educational mission.”

In the end, it’s all about the music, and the people who make it possible. Miller said that Reney’s “eagerness to share the beloved treasures of the jazz idiom...and loving reverence for the music has given us so very much.” And all that, “with so little fanfare, and so generously.”

Some 229 other people in Springfield that day felt that it was about time for some fanfare.