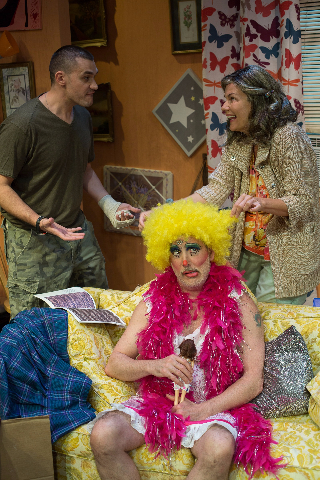 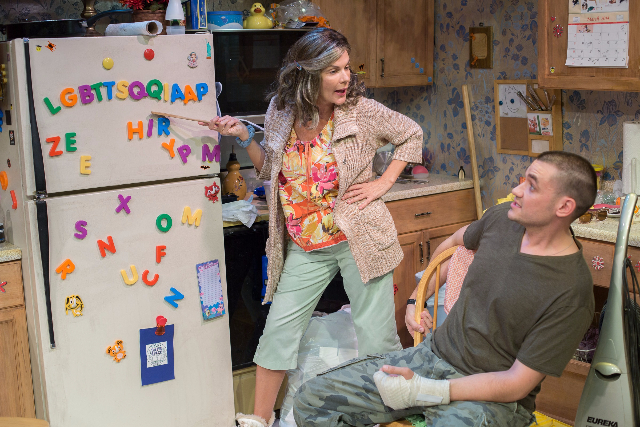 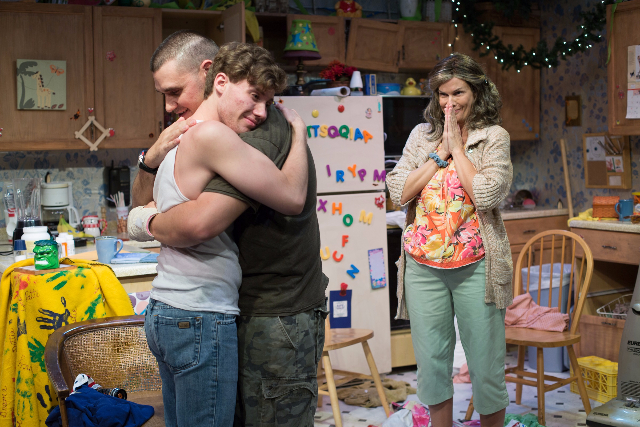 Soon, a woman of 55, but who could pass for 20 years younger, enters. She betrays an equally cheery, almost child-like disposition. She is full of energy.

The woman’s husband is clad in clown make-up.

If you think you’re only in for a slapstick-filled evening of escapist theater, you haven’t read the whole script of Taylor Mac’s HIR.

The disturbing dialogue to come might make you feel queasy --  kind of like how the elder son of the woman frequently feels.

It is 2015 and the son, Isaac, has just returned from a war zone in Afghanistan to the California home of his folks, Paige and Arnold Connor.

But another battle is just beginning.

HIR, which producers in 2015 extended more than once in New York thanks to popular demand and critical praise, is on stage at Wilton Manor’s intimate, multi award-winning Island City Stage in a first-rate production through Dec. 10.

With HIR, Mac, an Obie Award-winning playwright and theater artist, takes your average dysfunctional family play. He violently swings it upside down, inside out, sideways, orbit-high, mine-level low and…you get the idea.

The result is an absurd, shocking, subversive, pitch-black comedy. It will unsettle you one moment, leave you laughing and squirming the next and then emitting hardy laughs.

This widely-entertaining, intelligently-written, if somewhat overstuffed play has a lot to say, even if it has next to no plot. The show touches on gender, leaving the past behind, venturing out into the future, cleaning…and even alternative facts, as it pertains to history.

Whether you’re reading the play or watching it unfold on stage, you need to dig beyond its seemingly simply, absurd silly surface. There are parts of HIR that might call to mind a Greek tragedy such as Euripides’ play Medea. Other moments in Mac’s work suggest a sitcomy-type play with wry one-liners and slapstick.

Sure, Mac packs a lot into the play’s two hours and it might seem bewildering for a time. But let the play work on you. You’ll find resonance and become engrossed…even if you’ll feel grossed out and disturbed by some of the language and action.

A battle-weary Isaac Connor returns to a home in which he grew up, but now doesn’t recognize.

Garbage is strewn throughout, a stroke has turned his father into a cross-between an incoherent child and a dementia patient and his sister has become his brother. The younger person, a transgendered rebel of a sibling now named Max, has joined his mother’s quest to create a “new world order” from their “old regime.”

That past involves an abusive, male-dominated household ruled by Arnold before he suffered his stroke. But Paige is more than a feminist looking to highlight such slogans as “girl power” or “woman power.”

Her mission is to exact revenge on her husband by mistreating him, as though he were some old, stubborn dog or an unruly, irritating child. Watch her, and you’ll accuse her of elder abuse, guaranteed.

The plans for mother and son’s “new world order” sound extreme even today, when gay marriage has become common, along with same sex couples raising children. Paige has introduced to her household a new pronoun vocabulary in which the words “he,” “she,” “him” and “her” have become not only obsolete but offensive to Paige and Max. Many letters of the alphabet now form a new vocabulary – “she or he” is out, replaced by “ze.” “Him” or Her” are out, shoved aside by “HIR.”

“In these new genders, exist new pronouns,” Paige explains, like a teacher instructing a class. “Max is no longer a she or a he.

“There are no longer two genders. No longer simply a Y and X chromosome but an alphabet of genders. They call it the LGBTTSQQIAA community.”

Isaac, already suffering PTSD from loud noises, makes it his goal to battle back against these changes. He might be a member of the military, but Paige is more formidable than you might think.

Playwright Mac keeps our eyes and ears trained on the stage – you just don’t know what will happen next. Conflict keeps our attention: Mac pits order (Isaac’s preference for the past) against, at least in what is Isaac’s view, the chaos of a new, uncharted, dizzying future (Paige’s revolution).

One might think Paige, not Isaac, would want to clean. It’s Paige, after all, who wishes to start afresh and leave the old ways behind. But this unpredictable woman has other ideas about what it means to clean.

Director Andy Rogow varies the pace of the action. It runs the gamut from frantic to a slow-paced, carefully-staged battle before which the fighters take their time sizing each other up.

There is a staging issue: When Paige describes to Isaac the new vocabulary involving pronouns, Isaac (Daniel Capote) doesn’t face us. We see too much of his back; we need to see more of his facial expressions.

Due to the intimacy of Island City Stage’s theater (six rows of seating) the performers are able to create natural portrayals in which dialogue sounds as natural as every-day conversation. We feel almost like “flies on the wall,” eavesdropping on these seemingly real people’s lives.

The four cast members disappear deeply into their characters, playing them fearlessly and with impressive spontaneity.

Lawrence Buzzeo could easily win an award for seemingly effortlessly inhabiting the verbally-challenged Arnold. Each grunt, each grimace, each facial expression makes you believe you’re actually watching a cross between a mentally disabled child and a nursing home resident with advanced dementia. Watch Buzzeo, and you might recognize a friend or relative in a similar situation.

Mia Matthews also excels as a multi-faceted Paige. The performer shifts seamlessly from child-like, playful verve to a triumphant swagger, a stern manner and finally, to a dangerous, psychotic-like demeanor. She invests the character with such darkness at the very end. With blood staining areas around her mouth, thanks to a blow from Isaac, Matthews lowers her voice to a low, menacing but soft tone. While it’s quiet, it seems to scream GET OUT OF THIS WOMAN’S WAY--- NOW!

Thanks to an equally skilled performance by Daniel Capote, Isaac Connor’s moments of stomach upset seem as natural as a knee reflex action during a physical exam. Capote also conveys a weariness and vigilance that is appropriate for someone just returning from war. In addition, the actor sounds convincingly commanding, like a drill sergeant, when necessary.

Jodi Dellaventura’s spacious, bright set includes pictures and other objects on the wall. They cover up cracks and holes, indicating the house is deteriorating  quickly. It’s symbolic; you can’t necessarily paper over the past, however distressing, and feel it will disappear, never to haunt you again.

Island City Stage’s production of HIR runs through Dec. 10 at 2304 N. Dixie Highway in Wilton Manors, near Ft. Lauderdale. Performances are 8 p.m. Thursdays, Fridays and Saturdays as well as 5 p.m. Sundays. For tickets and information, visit www.islandcitystage.org or call (954) 519-2533.