The Minutes by Tracy Letts 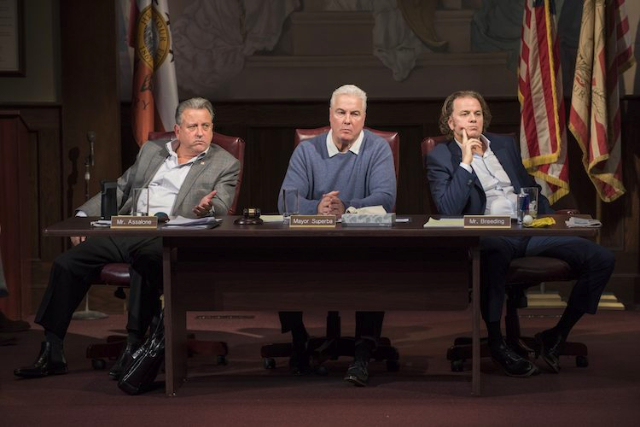 Steppenwolf Theatre’s world premiere of The Minutes by Tracy Letts takes place during a small town city council meeting. It’s a satire of small-town politics, individual grievances and so much more. Viewed totally, it’s an example of theater at its best. Entertaining, thought-provoking, puzzling, conversation-starting.

Steppenwolf  bills it as a comedy and the opening night audience seemed to agree with that for the first hour of The Minutes. Giggles and guffaws punctuated the action during the Big Cherry City Council meeting. During the last 30-40 minutes, the audience was silent. Anna D. Shapiro has done a superb job of mood- and time-shifting, as well as choreographing an event (a city council meeting?) that could have been deadly boring.

The playwright, who can be depended upon for complexity, turns a small town city council meeting into a modern morality play. The council members come in out of a rainstorm to wrestle with local issues and finally, with what their history really means—and what it really is. You may think The Minutes presents a microcosm of contemporary issues, such as racism and who gets to tell our story. You may scratch your head on the way out—but you’ll have plenty to discuss with your friends after the show.

The cast brings some fine Chicago actors to the stage to play the council members. William Pedersen plays Mayor Superba. Francis Guinan plays Mr. Oldfield, the most senior member of the council, who desperately wants to bring the subject of parking to the agenda. Danny McCarthy is Mr. Hanratty, who flourishes large display boards to illustrate his proposal for a new accessible fountain in Mackie Creek Park. James Vincent Meredith as Mr. Blake proposes adding a Lincoln Smackdown feature to the local heritage festival. And Mr. Peel (Cliff Chamberlain), who missed the last meeting because of the death of his mother, keeps demanding an answer to two questions: Where are the minutes of the last meeting? And when Mr. Carp finally appears, he reads a story that turns the meeting on its head.

Kevin Anderson, Jeff Still, Sally Murphy and Penny Slusher play other council members. Brittany Burch is Ms. Johnson, the city clerk, who is quite conscious of her official responsibilities and performs decisively when she finally reads those missing minutes.

David Zinn’s scenic design for the council chambers is perfect. I almost thought I was back in DeKalb, Illinois, when I walked into the theater. Brian McDevitt’s lighting surely included the occasional light dimmings, flashes and lights out as the rainstorm continues outside. (Appropriately, Com Ed is the sponsor of the production.) Dexter Bullard is responsible for the choreography.

Unfortunately, I can’t tell you what Bullard was choreographing or any more about The Minutes itself. No spoilers here.

I knew before attending that I would find The Minutes interesting. Although I’ve been back in my hometown of Chicago for 30-some years, I spent many years in small towns, mostly college towns, in Colorado, Missouri, Minnesota, Wisconsin, Ohio and Illinois. None of them were suburbs and none of them had populations over 25,000. And because it’s much easier to get involved in local matters in a small town, I’ve attended many city council meetings, school board meetings and planning board meetings. And I was occasionally a member of one of those groups or its subsets.

My question for playwright Letts: Why is this (and the previous week’s meeting) a closed city council meeting? Most state open meetings laws would not consider any of the agenda topics to be justification for a closed meeting. Dramatically, that does mean there are no members of the public to deal with in staging. But for the sake of political accuracy, it seems to me an error.

Tracy Letts is an accomplished actor and playwright. His other plays include August Osage County, Linda Vista, Mary Page Marlowe and Killer Joe.