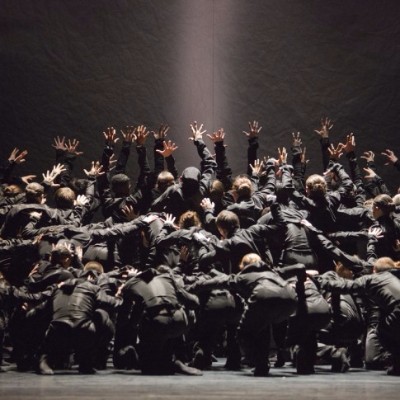 Splayed hands reaching for the stars? From Polaris. 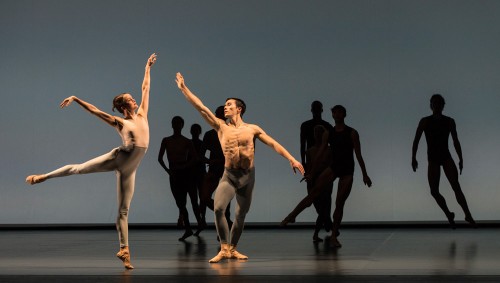 Outlier image from the London production. 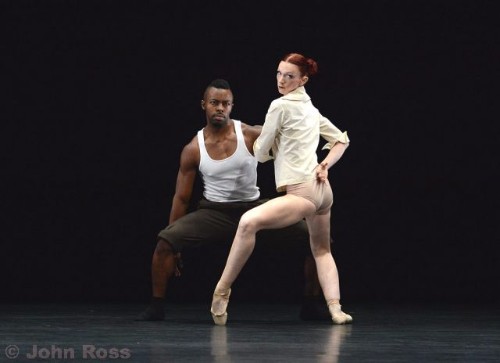 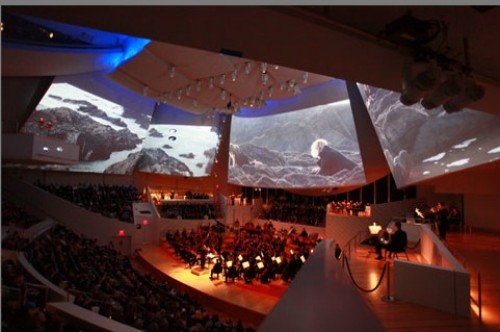 Ted Rosner images for the Premier of Polaris by the New World Symphony. 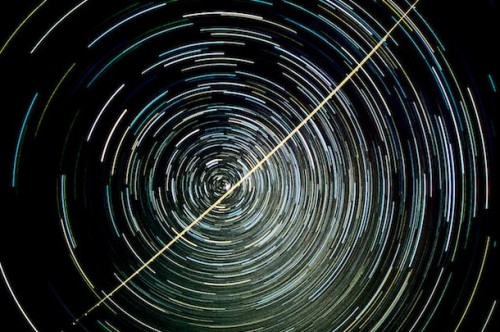 Polaris, the North Star, is the center of the starry night. 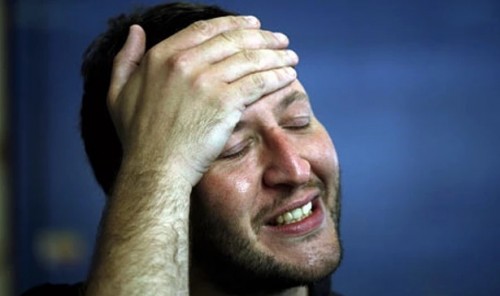 The composer. Gleaming white hands are a central feature in the Polaris choreography.

Concentric Paths is the subtitle ofAdès' concerto for violin and chamber orchestra.  Thomas Gould on the violin was a compelling soloist, expressive in his lines.  On stage, in Outlier, men and women dance in the center of a red circle.  Dance within the circle is harmonious until the outlier enters. Then a fight for possession of the women begins.

Lighting is coded to the emotions.  Red is for strong feelings; yellow for tranquility and grey for somber. The dancers are grouped as threes to reflect the triads in the music. Flexed feet, hyperextended arms and legs and complexly crossed limbs match the score and add to the tension.  The music provides an ambiance of threat and cues the dance's tempi.

The concerto is in three movements, Rings, Paths and Rounds.   The music swirls with the dancers in the first movement, grips with a dance in the second part and then propels you off into space, a theme of the evening.  Adès's music is detailed and subtle, but its impact is immediate.   His poetry is powerful.

Adès was at piano in next two pieces,  As he performs, he somehow elicits both a sustaining line of melody and a ceaseless tremolo. The piano is real and also ghostly.   I am quite sure I saw a fistbump of some grouped keys.

Life Story shows the composer as a master dramatist.  Taking a Tennessee Williams' poem on a seedy one-night stand, Anna Dennis sings the blues and gives the situation sexual bite.  The dancers mirrored the story.

Among the most satisfying merger of forms is Polaris, choreography based on Thomas Adès voyage for the orchestra of the same title.

Crystal Pite choreographed and the sixty-six moving bodies, under the supervision of six lead dancers, were propelled by the organic music suggesting growth in many different forms.

Was this a coral reef metastasizing over time?  Or an expression of community, merging and individuating? We are told that the background images are trees, but could they be mosques?

Dancers from and associated with Sadler's Wells were so clearly trained in classical ballet. Their alternative movements grew out of classic poses and postures and this gave a curious satisfaction, very much the same satisfaction Adès' music provides. The music rollicks as the sea does, yet fixed stars are viewed above. Harmonic focus yields to a new musical adventure.  Adès often ends with a ping which is indefinite and suggests a future.

Lighting for the four pieces on stage went from abrupt lightness to darkness. Yet the conclusiveness left us miraculously unbalanced and looking forward to another stab at opening us up to experience.

In its presentation of the Lincoln Center Festival and the White Lights Festival, the performing arts complex fulfills its present mission and moves to the prospect of an enticing future.