The Tale of the Allergist's Wife At Lyric Stage 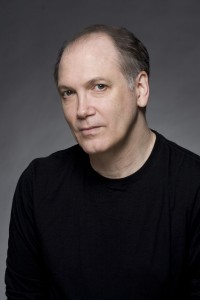 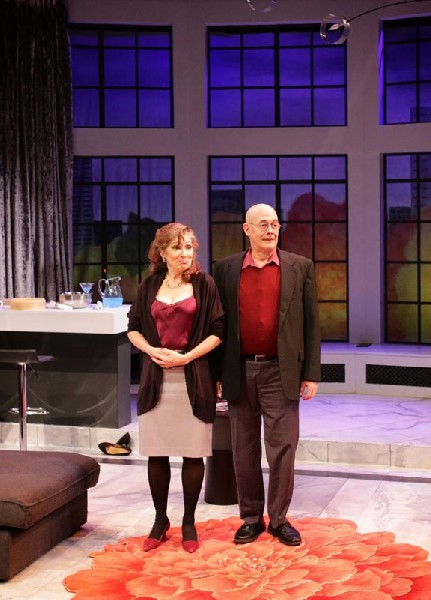 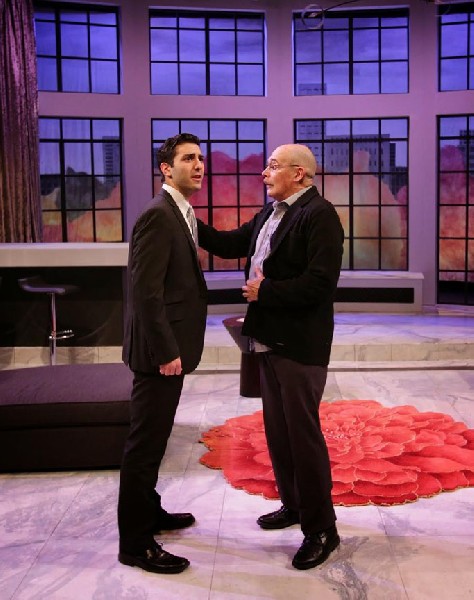 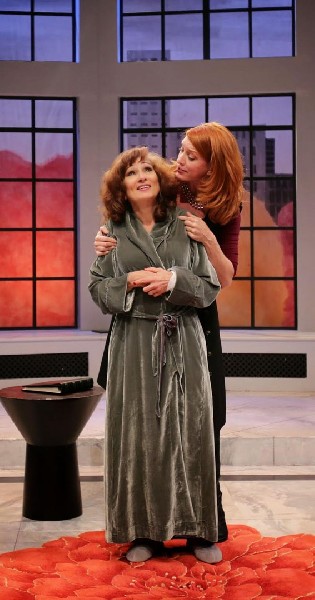 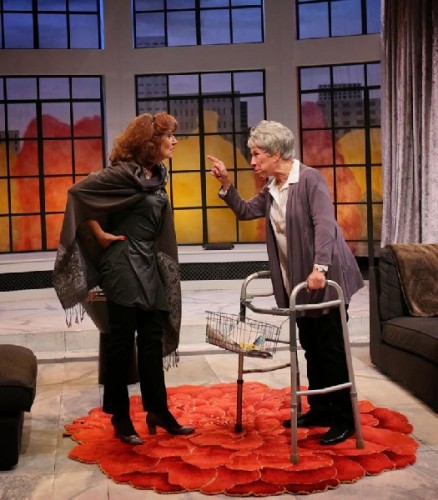 Playwright Charles Busch is known for his drag queen fantasies and his leading lady parts (sometimes performed by himself) based on the great stars of the Silver Screen. He paints his plays with wide colorful flat, broom-like brushes rather than refined detailed brushstrokes. Here, he morphs his best Neil Simon into a more mainstream yet somewhat dated (written in 2000) turn-of-the-millennium comedy, The Allergist's Wife. The premise is potentially great: upper middle class conventionality and Manhattan cultural malaise wrecked by sexual and social liberation. But, and a big "but," it does not quite work.

The protagonist Marjorie is an unhappy, neurotic, at times lethargic, middle aged empty nester matron with too much pointless time and an over eager cultural schedule to keep her busy. But no matter what she does, even installing a new chandelier in the living room, far from satisfies her. She suffers from a horrible elderly mother from hell, Frieda. The old lady lives down the hall in the luxury Upper West Side co-op and complains mostly about Marjorie and her own bowel movements or lack there of. Ira, Margie's retired doctor (allergy specialist and thus title of the play) husband seems somewhat oblivious to his wife's angst and is rather naive.

Dropped in the middle of this dysfunctional ménage (more about that later) is a childhood friend, Lee Taub, who appearing out of nowhere completely disrupts the group. She is glamourous, mysterious and full of self-confidence. Marjorie's part time confident, the Iraqi doorman Mohammed adds a somewhat uncomfortable political/historical relevance to the narrative.

Busch attacks the meaningful meaninglessness of the entitled, financially comfortable. It is a little like a one family view of the later Bravo show The Housewives of New York City, much bitchiness about mostly nothing. But the playwright plays almost everything for sitcom laughs. Making fun of those who can afford to do anything that they want but who accomplish little. Demonstrating great temptation by personal self-expression and sexual taboos in the first act, he spends most of the second act underscoring conventional and thus safer upper-middle-class values.

Fascination with others who seem even more flawed then ourselves is a very human trait. Add in the panache and perhaps awkward sophistication of New York City, it is not surprising, with major stars (Linda Lavin, Valerie Harper, Michelle Lee, Rhea Pearlman, etc.) in various roles, the play ran for nearly two years on Broadway.

This cast is led by Marina Re as Marjorie and a dozen years younger miscast Caroline Lawton as Lee Taub. Wallowing in a midlife crisis after an emotional explosion in the Disney Store (Disney Store?) that resulted in a great deal of figurine damage, Marjorie boldly concludes that she is depressingly mediocre. With a sudden reemergence in her life, the  flamboyant Lee draws Marjorie out of her darkness and opens up possibilities of all kinds to her friend. While Re's Marjorie is the most nuanced part, all of the roles are rendered as more cartoons rather than shaded characterizations.

Lawton's Lee is the most Manhattan-looking, elegantly trim, sexy and stylish. Too good to be true, she is a combination of the good samaritan and the consummate con artist. She is the lost incredibly dynamic friend who becomes the bad penny and lengthens her dinner to a seemingly turbulent permanent stay in the guest room. Adding to her character's amoral appeal, Lawton has the best physical presence in the production.

The bickering between Marjorie and Frieda is painful and only occasionally very broadly funny. With Ellen Colton's constantly complaining and belittling her daughter, Frieda is overplayed and lacks any character shading. Her walker gives a better performance than her oddly emotive face and gestures. Joel Colodner's nebbishy Ira has less professional presence and refinement than an ego-inflated do-gooding early retired Upper West Side doctor should, while Zaven Ovian's Mohammed is more nervous observer than participant in the goings on. These faults are probably mostly directorial.

Matt Whiton's set is confusing by what it isn't rather than what it is. The inelegant drapes open to what could have been a spectacular view of Central Park, but instead it is roughly rendered color blobs of treetops and cartoon buildings beyond. The apartment's furniture pieces do not suggest affluence or even interior designer taste either. Better style would have set a better visual tone for the show.

Even with a number of audience pleasing one-liners and comedic situations, this totally New York City-centric play fails to make us really care about what happens to Marjorie and the others. This comedy is a slight theatrical appetizer rather than an entertaining hearty meal. The show is more a period play of culture rather than of just manners. The Allergist's Wife is a comedy of a time and place, but not character.