By William S. Burroughs With Music by Tom Waits 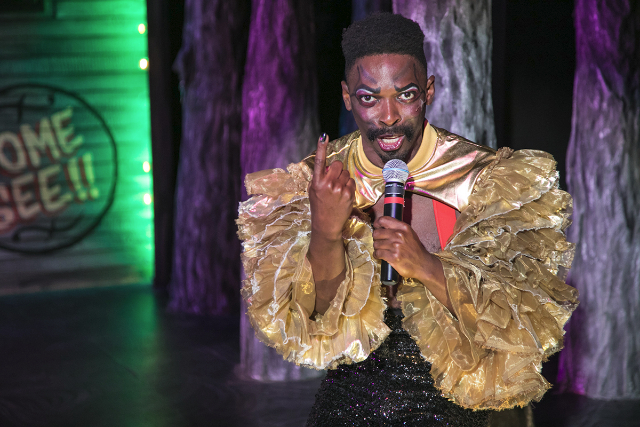 Rotimi Agbabiaka as Peg Leg. All photos by Cheshire Isaacs. 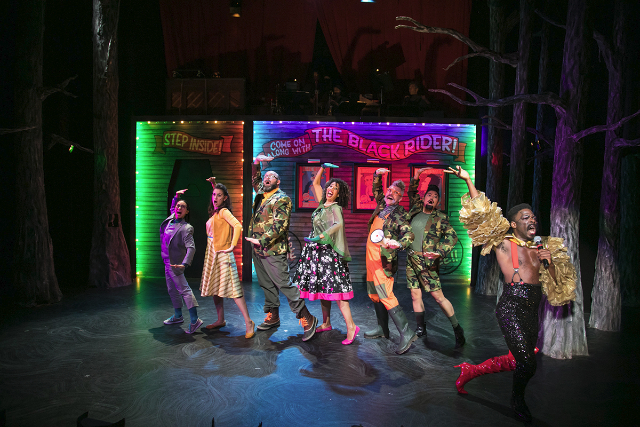 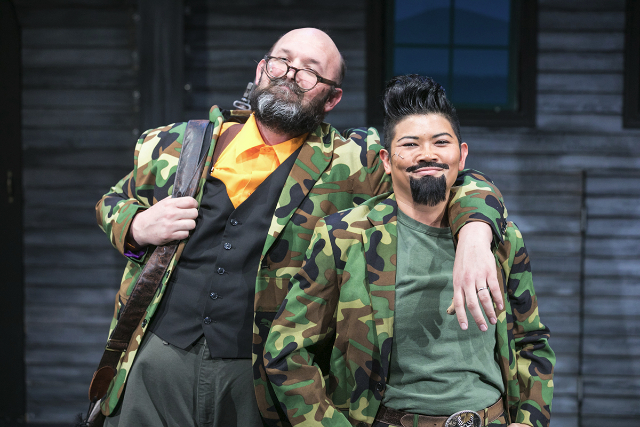 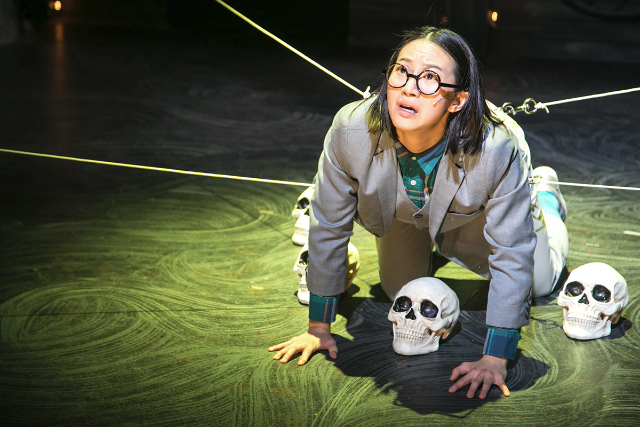 “The devil made me do it,” – catch phrase popularized by comedian Flip Wilson (in falsetto voice.)

In the opening moments, you might get the sense of the musical “Cabaret” set in a German forest, narrated by a trickster character dressed in Carnevale-like garb. When things get weirder and weirder, you may be reminded of the diner scene in When Harry Met Sally and figure that you’ll order the same thing the playwright is having. But then you might learn that the genesis of this play derives from a real-life tragedy caused by colossally poor judgment. Playwright William S. Burroughs accidentally killed his wife re-enacting the William Tell tale by trying to shoot a bottle off of her head. Such contributes to the bizarre atmosphere of The Black Rider, given an exciting, provocative, and entertaining journey by Shotgun Players.

The play is a riff on Der Freischütz, (The Freeshooter) a Germanic tale made most famous by the seminal German Romantic opera of the same name, composed in 1821 by Carl Maria von Weber. The central theme of the story is the age-old bargain that the weak-willed make with the devil. More broadly, it is about the demons within us that the courageous acknowledge as their own weaknesses and responsibility. Charlatans, often under cover of a religious veil, try to evade accountability by blaming their own corrupt actions on “the devil.”

In Black Rider, Bertram, a forester, plans to give his daughter’s hand to Robert, a hunter who can always put food on the plate. The daughter, Kätchen, is in love with the poet Wilhelm, who cannot compete with a gun. Ostensibly, so that Wilhelm can succeed as a hunter and marry Kätchen, the devil offers Wilhelm six magic bullets that will find their intended marks in return for the devil’s shooting one bullet into the dark. Any suspicions here about whether the outcome is what Wilhelm desired or expected?

Over a dozen songs written by Tom Waits punctuate the action, driving forward the plot, or at least its vignettes. Many of the melodies seem suitably German tinged. The lyrics are colorful and thoughtful, including those of “November,” “Crossroads,” and “The Last Rose of Summer.” As performed on stage, it’s hard to imagine Waits’ growling, wailing, weary voice behind their creation. But he recorded the soundtrack, and his version sounds like it’s from a different planet – demonstrating how exciting different interpretations of the same songs can be. The instrumental lines in this production are delivered by a band of five accomplished musicians who play enough instruments to stock a full orchestra.

Perhaps the most remarkable aspect of this production is director Mark Jackson’s inspired gender-bending casting along with the chosen actors’ performances. As one competitor for Kätchen’s affection, the very masculine Robert is played by the versatile and very feminine El Bey. With only the addition of a Van Dyke beard to hide behind, she absolutely convinces and masters the part, with her depiction of the character’s male sex drive and with singing well in her lower register.

As a member of the Shotgun company, Beh’s selection was planned, but the very feminine Grace Ng’s casting as Wilhelm was serendipitous. She just offered too many talents wanted for the role, despite not having the expected gender qualifications. Her natural female looks are retained, but the role is interpreted very physically, with thrashing and stomping about – which she handles with grace – no, make that verve. Her flipping-around pageboy hairdo and flopping-around oversized, black-rimmed glasses act like extra expressive appendages in her great comic segments. The gender switch is also emphasized when the diminutive Ng stands on the highest of tippy toes to kiss the girlfriend.  In watching Ng’s performance as a man in this oddball comedy-musical-morality play, it’s hard to imagine a conventional casting working nearly as well.

The whole ensemble is effective, but another shout out goes to Rotimi Agbabiaka. He provides the connective tissue in the plot as the flamboyant Pegleg – the narrator-troubador-devil, which he plays and sings with flair. Director Jackson brings all of the creative elements in sync. Spotted and often panned lighting; sound like messages from above; fairy-tale costumes; and a carnival-like set all work wonderfully to create a fitting ambiance on the small stage. In addition, since no choreographer is listed in the program, the director must be given credit for the extensive movement schemes, especially the energetic exercise-like routines of Wilhelm.

This work may not be for everyone, particularly those not enamored with farce or mysticism. Also, the plot sometimes moves slowly and is somewhat disjointed. Though the important moral matters of being true to one’s self and not giving into compromising temptation are clear, many of the patchwork sketches seem stream of conscience, and their relevance may be lost to many. However, the production of this interesting story is exemplary and well worth seeing.

Black Rider: The Casting of the Magic Bullets, written by William S. Burroughs with music by Tom Waits is produced by Shotgun Players and plays at Ashby Stage, 1901 Ashby Ave., Berkeley, CA through December 31, 2017.