A Comedy of Manners, Wit and Whimsey 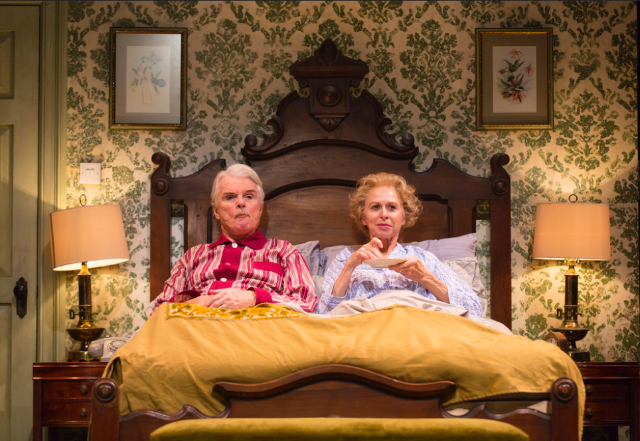 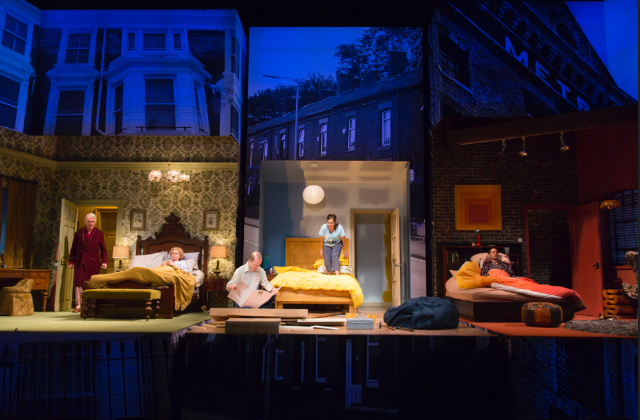 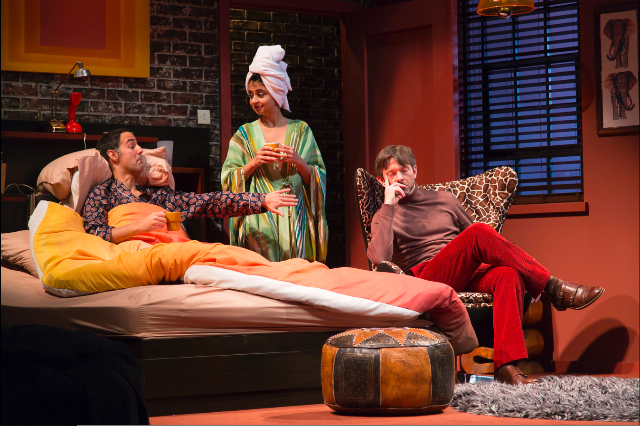 Brightening up this glum election aftermath, Bedroom Farce, now playing at the Hunting Theatre, is a comedy of manners, a contemporary play about bad behavior brought on by the angst of late 20th Century relationships between the sexes. A comedy of manners is defined as a satire about manners and affections of a social class or of several social classes usually with one or more stock or stereotypical characters. Bedroom Farce is certainly an example of this.

Written by the prolific playwright and director Alan Ayckbourn, this is one of a series of the playwright’s plays focused on the foils and faux pas of the British middle classes. Though considered not serious enough in subject matter and intellectual depth for years, recently scholars have begun to view Ayckbourn as an important commentator on British suburban middle class lifestyles. He is now considered a stylistic innovator experimenting with theatrical styles within the boundaries of popular culture. In the hands of Ayckbourn, satire became couples’ funny often bad behavior.

Taking place on a Saturday night, eight characters populate the play. A stuffy, very old school, older twosome, a younger couple who have just moved into a new house and are having a housewarming party, another two where the husband is bed-ridden due to a severely pulled back and an energetic, less than solicitous wife and a distractingly disruptive fourth couple who seem to be at war, both verbally as well as physically. All share in the wordsmithing of Ayckborn’s cleverness.

Set in the mid 1970s, the action takes place in three very different, exposed bedrooms. The exposure is not just visual, but emotional as well. As usual, the stagecraft at the Huntington is exemplary. Opening on the elderly couple preparing to go out for their annual anniversary dinner, the audience views the first bedroom that is shared by the initially cardboard cutout Brit (jolly-well, by Jove retired from the regiment, banker or solicitor) Ernest (Malcolm Ingram) and his seemingly just as stiff lady wife Delia (Patricia Hodges). Tasteful and yet shabbily elegant, their room is their jointly held personal and matrimonial space. It is generationally different from the other two spaces. The couple’s dry humor and personalities takes time to be noticed.

Earnest Ernest worries about their aging Victorian house’s leaky roof and equally leaky marriage of their son Trevor (Karl Miller) and his seemingly kooky wife Susannah (Katie Paxton). The second room is the site of renovations of the newly moved in couple of hyper Malcolm (Richard Hollis) and the more authentic Kate (Emma Kaye). They are having a housewarming party. Of course, self-centered Trevor and the seemingly emotionally unstable Susannah ruin the party by their fighting.

The third bedroom is inhabited by the bedridden, snarky Nick (played with pratfalls by Nael Nacer) and Jan (Mahira Kakkar). Nick has a severely pulled back and an even worse attitude. Nacer’s physical comedy comes out of the Monty Pythonesque “Silly Walks” bureau. By the way, Jan was Trevor’s former girlfriend. She decides to go to the housewarming party without Nick. And Trevor eventually shows up at Nick and Jan's while Susannah visits Ernest and Delia's place.

Though at times a little dated (written in 1975), the play focuses on inferences about sex or the lack thereof. Each individual bedroom acts as a window on the lives of their inhabitants: Ernest and Delia delight in having pilchards on toast in bed; Malcolm and Kate oddly hide each other’s clothes and accessories under the covers and under the bed; and Nick whines about a lack of attention and sympathy for his physical misery from Jan. Trevor and/or Susannah are the disruptive connection between the rooms and the other couples. Trevor is Malcolm and Delia’s son. Sprinkled in wherever possible are Ayckbourn’s wit, whimsy and just a bit of wisdom.

Though very English, often the variety of British accents sometimes wander from actor to actor. Emma Kaye’s Kate is the most convincing along with Malcom Ingram’s Ernest and Patricia Hodges’ Delia.

Scenic designer Alexander Dodge has creatively differentiated the three couples lifestyles in the trio of bedroom designs. Cleverly, Lighting Designer Matthew Richards shifts attention from one vignette and space to another dramatically or just momentarily.

Masterfully, Director Maria Aitken uses a strong hand in orchestrating the to and fro/ back and forth of the actors and actions. And she should know as Aitkens played the first Susannah in 1977.

Using words and phrases punctuated by skilled, lightly seasoned repartee, Aychbourn’s Bedroom Farce is a droll romp. If it isn’t a rib-sticking holiday pudding, it is certainly a delightful trifle.