Poignantly In and Out of the Closet

Bruce, standing, and his lover as Alison looks on. 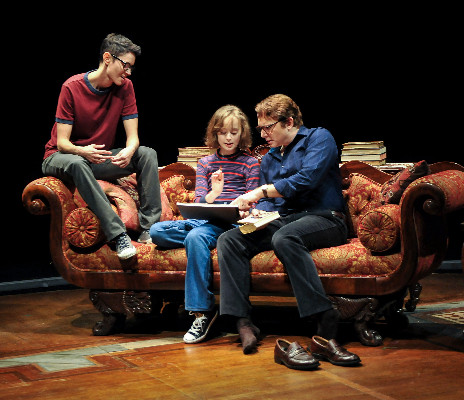 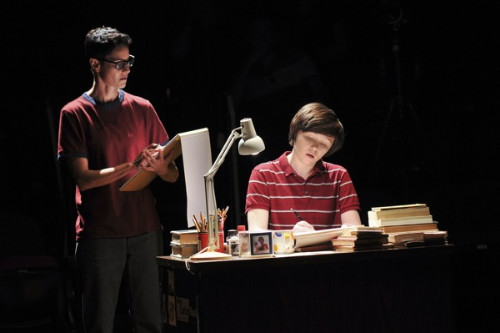 Alison and her self as a college student. 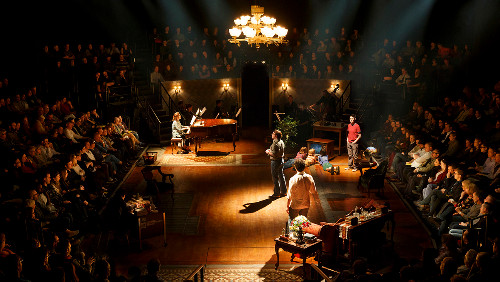 In the round production at Circle in the Square. 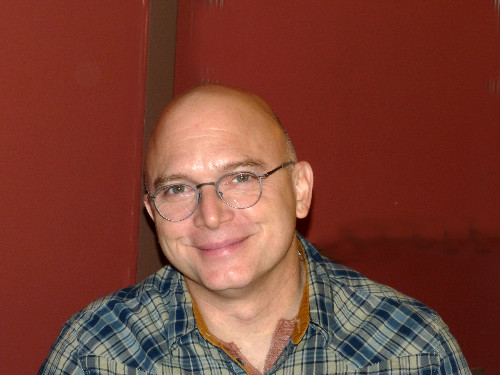 Initially in an oval configuration the audience surrounds what appears to be a loving and idyllic American family. But soon its narrator Alison Bechdel (Beth Malone), a lesbian creator of illustrated books, states that "Dad and I both grew up in the same small Pennsylvania town. And he was gay, and I was gay, and he killed himself, and I became a lesbian cartoonist."

With pop up props and ornate, decorative antique furniture we gaze transparently into the home of closeted collector/decorator/ renovator father Bruce (Tony winner Michael Cerveris) who is a high school English teacher and part time funeral director. There are three perfect children, in addition to Allison, the adorable Christian (Oscar Williams) and John (Zell Steele Morrow).

Their mother Helen (Judy Kuhn) shelters them by keeping secret the later revealed fact that her husband has been having affairs with men since the first years of their strained marriage.

Now in her mid forties Alison is looking back at the process of her sexual development as well as the circumstances of her father deliberatiely walking into the path of an oncoming truck.

Conveying the passage of time in the narrative Alison is also portrayed as a child (the amazing and captivating Garbiella Pizzolo) and as an awkwardly repressed and conflicted college freshman, Emily Skeggs.

We connect with empathy and compassion to Bruce who emotes about every yard sale find added to his collection of nick knacks. He conveys gushing energy as a perfect father to his kids. What starts as an all too familiar ersatz TV sit-com is soon stood on its head. This is the Partridge Family gone ever so dark.

Seeing the family at play, with the ever reserved and withdrawn Helen looking on, we absorb the irony of why this is a “Fun Home.” It is the name that the cavorting kids give to growing up attached to the small town funeral parlor. At one point Alison reflects on being asked by her dad to assist in the embalming process. Was it just a coincidence when he asked to be passed the instrument or was this an initiation into the family business?

There is a hilarious scene where the kids play with a casket and compose a catchy jingle to advertise their funeral business. It’s a cute take on gallows humor.

The mystery of the father’s sexual identity, while stated out front, is hinted at for the developing children. Joel Perez portrays an array of Bruce’s lovers from student to summer gardener and assistant in endless renovation projects.

We see the young Alison revolting against wearing a party dress and shiny shoes. She wants to go in jeans. The father insists on pinning back her hair with a barrette. The child, clearly struggling with gender identity, says that she wouldn’t have to if dad will let her get a crew cut.

For me the middle Alison, a college student, was a misfit. I found the performance of Tony nominated Emily Skeggs stilted and awkward. She over articulated her lines in a manner that failed to convey their emotional focus. On campus she struggles with the possibility of joining the campus gay and lesbian organization.

When she does Alison comes out with the more mature and sophisticated Joan (Roberta Colindrez).

Bruce who is keenly interested in his daughter’s education has given her books which they discuss. Joan points out that he gave her a volume of the writing of a known lesbian Colette. She posits this as a signifier of his support for her emerging identity.

In a letter home Alison goes beyond the usual school is great to wanting to out to them a change in her life. She is frustrated by the lack of response. Her father provides a vague comment that college is a time to experiment. Back home she confronts her mother. This results in the revelation of her father’s sexual identity.

With this outing his fragile cover story is stripped away. We surmise that this is what initiates his suicide.

The musical is poignant, tragic, but too readily credible. It belongs to a time when gay men remained closeted and married to conform with acceptance in society. There is a contrast with the dark secret that ultimately destroyed him and his daughter who was able to live openly as a lesbian. This compelling musical explores the cusp of that generational transition.

For men of Bruce’s era being gay was regarded as an illness, crime and perversion. This sensitive and absorbing musical richly coveys why today we live in a far better world.