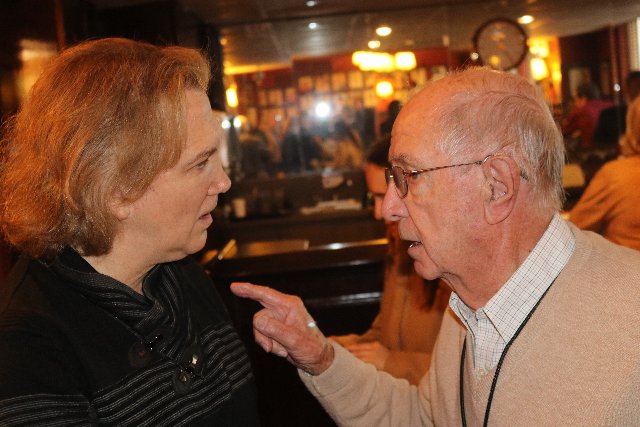 I’ve noticed a trend lately in our ever-changing theatre scene that states in the playbill/programs that “This production will be performed without an intermission.”  It appears to be a sign of the times  indicating that budgetary issues are definitely impacting not only the subject matter of stories being written by playwrights, but also the size of the casts employed by producers as a result.

Is it a harbinger and sign of the times?  It certainly looks like it.  The fate of the three and two acts play structures over the last 75 years, (unless one was watching a Shakespearean play that told its story in 5 acts back in its day) is likely to be as relevant in today’s theatre productions as a buggy whip.

It’s difficult to actually pinpoint when producers introduced the “90 minute” production concept; ranging in cast size from the “two-hander” to casts up to six characters, but it’s been at least ten years by my count.

Today’s American society in general have short attention spans.  We are an instant gratification-driven society.  We want everything and we want it now!  “Immediate seating, no waiting” is music to our ears, be it entertainment or dinning choices. Alas, it’s no wonder we’re constantly stressed out much to the delight of the pharmaceutical industry.  I believe our playwrights and theatre professionals deserve much better than this.

The American Theatre Critics Association (ATCA) usually holds its New York City Broadway visit event in late October/ early November to coincide with its member conference and plays availability from Broadway producers.  This year’s conference was short and sweet.  It ran from November 1st thru November 3rd.  Not much time for the average person to see many plays, however, theatre critics thrive on overdosing and binge reviewing as many plays as possible within that short window of opportunity.

To wit:  I saw three productions in that time span and each one as it turned out was performed without an intermission; running approximately 85 to 90 minutes.  A perfect time frame for the current state of today’s theatre-going audience demographic choices.  And I still had time to attend an all-day session of panels and discussion groups.  How do we do it you wonder?  Ah, that’s the mystery and the magic of the theatre.

In order of the productions seen and reviewed, “Betrayal”, by Sir Harold Pinter is a must see show for Pinter fans.   Its devilishly written dialogue and non-linear plot is deftly performed by a terrific cast of actors led   by British leading man Tom Hiddleston as writer Robert, husband of Emma, a sultry Zamwe Ashton, and Charlie Cox as Jerry, Robert’s agent and best friend and the other man in this love triangle production.  Eddie Arnold, lends solid support as the Waiter and performs other yeoman duties as well.

Harold Pinter, in a moment of complete candor said he based this play on his own marriage woes involving infidelity and betrayal as the key components.  The powerful production, exquisitely directed by Jaime Lloyd, features strong emotional content mixed with achingly poignant moments of truth and boldness as it explores the rush that sex and infidelity sometimes, for some, can inject into a marriage.

The stark, minimal set design by Soutra Gilmour, matches and achieves director Lloyd’s vision on how best to capture Pinter’s edgy and all-so-civilized-sophisticated drama.  The characters are playing with dynamite which almost always leads to one or all in the triangle being forever scarred and even destroyed.

The timing and pacing may appear glacial at times, but this non-linear play is so compellingly well-acted by this cast that it keeps one engaged and on our toes until the payoff moment that is so Pinter-esque. The sex triangle characters are fully formed adults who know what they’re buying into when the play begins, but we the audience, must wait to find out how it all sorts out.  And it’s all accomplished in less than 90 minutes.

The second play reviewed was the Irish Repertory Theatre production of Conor McPherson’s self-loathing melodrama “Dublin Carol”.  The Irish Rep Company has a fabulous reputation of bringing the light and dark side of Celtic heritage to its productions that celebrates the many styles of story-telling yarns for which the Irish are famous.

“Dublin Carol” is a penetrating portrait of Irish culture with a leitmotif of alcohol addiction, guilt, remorse, and redemption running rampant throughout its 89 minutes of the stage performance.  Needless to say, it’s not an O’Casey-like comedy.  But, it is an ever so brilliant tour de force performance by Jeffrey Bean, as Dublin funeral parlor employee John Plunket who is constantly warring with his demons that will not stop coming out of the Jamieson whiskey bottles he keeps in his cupboard.

The play set in Dublin on Christmas Eve in 1999, centers around John’s relationship with his estranged daughter Carol (Sarah Street) who has not spoken to her father in eleven years who now suddenly shows up on his doorstep to inform him that her mother is dying of cancer.    Carol has a love/hate relationship with her father.  She wants to have a closer family relationship, but she can’t bring herself to forgive him for his “abandoning” of the family years ago.

Guilt is the powerful enabler and the enemy of remorse and redemption.   No character feels that pang more acutely than John.  The nephew of John’s friend is a young Dublin lad of twenty named Mark – who has recently joined the family funeral business – is nicely played by Cillian Hegarty. His purpose is to help flesh out the deeply held emotions and insecurities of John as sort of a sympathetic ear and shoulder for John to lean on when the “urge” to enjoy the comfort of those Jamieson whiskey bottles become too strong to resist.

The Irish aren’t considered as having the “gift of the gab” for nothing. “Dublin Carol” is a talky play.  The beauty of the production, however, lies on the performance of Jeffrey Bean as John.  It’s a tribute to Bean’s talent, experience and stamina if nothing else.  He’s on that stage for about 80 of its total 89 minutes.   It’s an astonishing performance.

The last production reviewed in this three- mini review piece is “The Height of the Storm”, written by French playwright Florian Zeller, with an English translation by Tony and Oscar award-winning author/playwright Christopher Hampton.

The 2018 Olivier Award-winning play stars British theatre legends Eileen Atkins and Jonathan Pryce in two riveting star-turn performances as an aging couple of some 50 plus years of marriage who find themselves needing one another more than ever as the medical term of “dementia” begins to rear its ugly head.

Playwright Zeller is a huge fan of playwriting Nobel Laureate Harold Pinter, which accounts for the echoes of Pinter-like plotting, the opaqueness of structure, the content, and the style so associated with Pinter plays.

For example, the audience, at the beginning, isn’t quite sure whether the characters of Andre (Jonathan Pryce) and Madeleine (Eileen Atkins) are even alive as characters. They are seen interacting with their two daughters Anne (Amanda Drew) and Elise (Lisa O’Hare).  But they too may even be ghosts or perhaps, figures of the imaginations of the other on-stage family members, as well as two non-family visitors: The Woman (Lucy Cohu) a woman who claims to be from Andre’s past whom he doesn’t recognize or knows, along with The Man (James Hillier) the boyfriend of Elise; all of whom meet and interact with one another. Confusing?  You bet.

One thing we know for sure is that either Andre or Madeleine must be deceased.  Which one passed first is revealed at the end.  Everyone else appears to be caught in a dream, and/or in denial.  Frankly, even for me, a Pinter fan, Zeller has tossed in too many red herrings into his French onion soup that lacks clarity and cohesion.  I’m not sure if the play’s clarity problems lies in the original French version or in Hampton’s English translation.

Regardless of clarity concerns of the story directed by Jonathan Kent, one cannot deny the power and precision of the performances of Jonathan Pryce and Eileen Atkins. These two stars possess the talent and acting chops to still knock your socks off, along with solid support from this impressive ensemble cast.