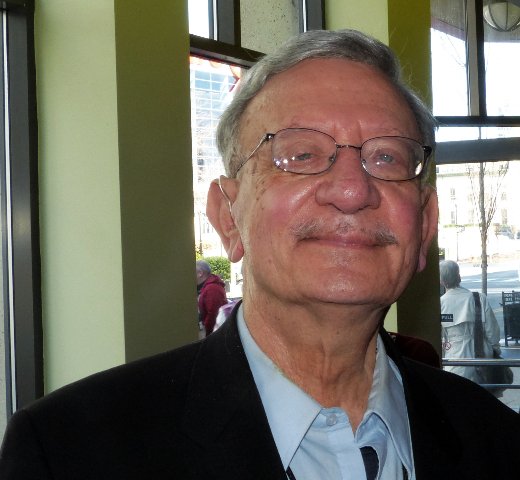 The New York based critic at large, Edward Rubin, peppers us with daily updates. While reluctant to write formal reviews, often addressing us a “Hi kids,” Fast Eddy, as he is known to friends likes to repost reviews laced with insights and gossip.

For the past year these reports included medical updates on our colleague Herbert Simpson. They were close and roommates from time to time covering the Stratford Festival. Based in Rochester it was part of Herb’s beat. He passed along that coverage to post on Berkshire Fine Arts. It was an honor to do so.

Herb had interesting friends including the playwright Edward Albee. Those kinds of relationships are rare in theatre. There is an unwritten rule about critics not getting too cozy with those we write about. Another such exception was Frank Rich and Stephen Sondheim.

(Link to Simpson on Albee.)

The intent of Simpson was always to dig deep into the heart and soul of theatre. In that regard familiarity and potential conflict of interest were just the cost of doing business. The primary source is always best for insights about the complexities of drama. How wonderful it must have been to have lunch with Shakespeare during rehearsal breaks.

When attending ATCA conferences Fast Eddy organized dinners and after theatre cocktails. Herb was a consistent fellow traveler. He was always generous with thoughts and insights. Friends recall with humor that he was never at a loss for words.

We strongly differed about a production by Anne Bogart’s SITI at Humana FestivaL The Suzuki method play deconstructing the American folk song “John Henry” was too much for him. It combined looped dialogue, stutter steps, circling  and dance. To me it was provocative and thrilling. Herb conveyed hating every minute of sitting through it.

Respecting his vast experience and knowledge I came to agree to disagree. Much of our difference was disciplinary and generational. That was richly evident last year at the end of our annual lunch with the stars at Sardi’s.

While fellow ATCA members rushed to matinees Jack Lyons and I had time to kill before an evening performance. Herb had no plan other than get back to his hotel.

We lingered at Sardi’s until they let the cat out of the cellar. Herb had a captive audience and held forth to our fascinated and rapt delight. There were many insights about theatre then and now. As well as, of course, comments on Albee productions.

It was vintage Herb and the last Jack and I saw of him. That’s my best way to remember a great man of theatre from our often contentious side of the footlights. In our uniquely fraught confraternity he was a lion. Compared to which I am but a lamb.

What follows is the obituary posted to the ATCA website.

For even those who only, like me,  knew Herbert Simpson in passing, likely what they remember was his voice - usually deep and sonorous, a bit scratchy, but brimming with passion.

They remember his voice because Simpson, the critic and educator who died Sunday, never passed on a chance to hold forth at great length with erudite insights about virtually anything remotely connected to the performing arts, said friends and relatives who gently joked about Simpson’s loquaciousness.

Simpson, a significant voice in theater journalism in Rochester and dance criticism nationwide, died at the age of 85 at a  nursing facility in Livingston County. Escalating illnesses caused him last summer to miss the opening of the season at the Shakespeare festival in Stratford, Canada, likely for the first time in decades.

Jack Lyons, who spent hours with Simpson at American Theatre Critics Association conferences, wrote, “We disparate souls of the theatre who value our passions have lost a vanguard member of our community….  He was the epitome of an elegantly dressed gentleman who took his profession seriously, albeit on a singular POV road at times, but nonetheless with erudition and style.”

Like several friends, Lyons acknowledged that Simpson could be acerbic as well as funny. “Herb didn't suffer theater fools easily. He could go toe-to-toe with Addison De Witt (the fictional critic in All About Eve) any day, and my money would be on Herb.”

His nephew, Jonathan Lichtman, spoke of his uncle’s forthrightness. “He was without a doubt the most brilliant man I personally knew. He had no filter… but he was the most kind man you ever knew,” Lichtman took a beat for comic emphasis, “unless you dangled a participle,” then another beat, “or delivered a bad performance.”

Equally important to him, Simpson taught at the State University of New York at Geneseo from 1966 to 1998, helping develop courses in the arts including theater criticism, theater appreciation and dramatic literature. When theater and dance troupes came to town, he frequently sponsored gatherings at his home for students and professionals to mingle, said fellow educator and long-time friend Scott Ray.

His long membership with the American Theatre Critic Association included years of incisive analyses as a judge of entries in the Steinberg/ATCA new play competition.

But he was even more memorable to ATCA members for lengthy discussions about the arts during the organization’s conferences around the country.

Those friends and colleagues gave a droll nod to the yin and yang of Simpson’s marathon orations. Fellow arts critic Edward Rubin recalled, “All you had to do was say one question… and he could go on forever. But Herb had a way of capturing people: On one hand they wanted to hear what he had to say and on the other…” Rubin laughed,” … “they wanted to get away.”

He was always careful to check his appearance before going out on the town, Rubin said. Friend and critic Lynn Rosen agreed, “I can only picture Herb in his sartorial best, smirking his elegant critic's wry grin whilst forming a few well-chosen bon mots."

Although he knew numerous boldface name artists in theater and especially dance, he didn’t sound as if he was name-dropping when he mentioned them.

The most high profile was a close friendship with Edward Albee. He visited the playwright when Simpson came to New York and kept up a spirited correspondence.

Albee had come to Simpson’s class when the teacher was helming an early semester-long class into the writer’s works.

“I have 50-60 letters that he hand wrote to me which are always fun to try to read because you should see his handwriting,” he told fellow critic David Lefkowitz in a 2017 podcast Dave’s Gone By. On occasion, Albee would even send Simpson a script before it was published.

Simpson never made a secret of his sexuality. “Herb said you take it as you get it,” Ray said. His nephew recalled stories about his being upfront about being gay and socializing with gay artists on multiple trips to Moscow where homosexuality was considered a crime.

No funeral has been scheduled. His nephew, Lichtman, said with a chuckle, “The last thing he expressed was he wanted to be cremated and thrown in the river.” Instead, Lichtman will scatter his ashes in San Francisco Bay on Dec. 14 with those of Simpson’s sister and Lichtman’s mother, Marian, who died Nov. 14. There may be a memorial in New York City sometime next year, he said. No recipient was cited for contributions, although Lichtman said he had always been a strong supporter of LGBTQ causes.

Simpson was born August 2, 1934 in Baltimore, a city and region he prized throughout his life. He began seeing theater and dance recitals from the age of 13 because many productions tried out in the region.

He graduated from Forest Park High School and attended undergraduate classes at Cornell University, later attending the University of Maryland at College Park where he earned his master’s degree and a doctorate based on a thesis about critic George Jean Nathan. He also served two years in the Army at Fort Devens in Massachusetts. Later he taught classes at schools on the eastern shore of Maryland and even at the Pentagon, while enjoying that so many major productions and tours stopped off in nearby Washington, D.C.

For about a decade, he served as an adjudicator for the New York State Council on the Arts assessing applicants for grants. He was also a founding member of the Dance Critics Association.

At the same time, he wrote for a quarter-century for Dance magazine, travelling the world seeing companies he prized like the Royal Danish Ballet, championing the world of iconic American choreographer Garth Fagan and producing an 18–page cover story on Valerie Bettis.

He covered local theater as well as New York productions for more than 30 years for such publications as the Rochester Times Union then the Rochester Democrat and Chronicle, and City Newspaper. As a freelancer later, he wrote for online publications and even maintained accounts on Facebook and Twitter where he excoriated current politicians.

Simpson was an enthusiastic fan of the work at the Stratford theater center, having first attended in 1964 and having seen nearly every major production since 1980.

But he had been cutting back his workload as illnesses mounted, especially on reviewing local productions. He told Lefkowitz in 2017, “These days freelancing, I don’t have to review a season the way I did when I was the local dance critic and theater critic. So I can avoid looking at upstate New York adolescent children playing 19th century middle-aged Russian Jews in Fiddler on the Roof.”

But he had already accumulated a storehouse of stories. Recalling the original Broadway production of Long Day’s Journey Into Night, “I started up the aisle after Act One and a man turned to his wife and said angrily,’ This is no comedy.’ ”

His health deteriorated in recent years, especially in recent months – but not his sense of humor or his anger at current politics. When doctors were charting his deteriorating mental acuity, they asked a standard question, “Do you know who is President?” Lichtman recalled, “The look he would give them would be full of daggers.”

That enduring brand of quiet wit and defiance exemplified Simpson, said some of those who knew him.

Lichtman summed up, “He lived life on his terms.”