The Gin Game Is Magnificent

A Triumph for James Earl Jones and Cicely Tyson 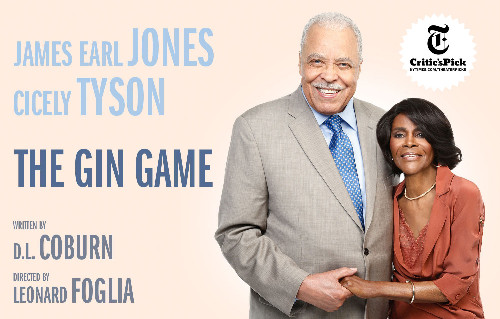 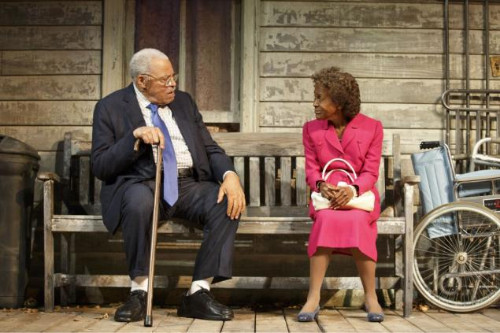 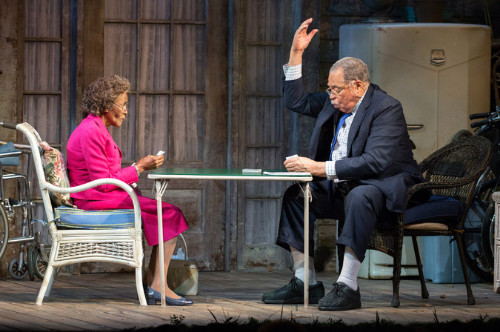 Yet again James Earl Jones, he of the magnificent voice and an iconic actor of his generation, is paired in a two hander with a similarly renowned great lady of theater.

Five years ago he was seen with Vanessa Redgrave in “Driving Miss Daisy.”

The set designed by Riccardo Hernandez depicts the ramshackle, cluttered with stuff, back porch of a decrepit retirement and nursing home. Its residents are down on their luck last-stoppers in God’s waiting room.

We learn that they are both divorced and abandoned by their families. Fonsia weaves a fantasy of children in far away cities as an excuse for their not visiting. With a measure of heavy handed brutality Weller reveals that her daughter lives close at hand but declines to visit.

Escaping the inanity of what goes on inside, including programming for seniors, they seek solitude and initially reluctantly, mutual companionship. Although seemingly cast aside by friends and family, they cling to their pride and dignity. He with brash bluster and an emotional roller coaster while she is quiet, reserved, lady like and demure.

Producing a deck of cards, the trope of the two act play, he proposes that they play gin rummy. Initially, she indicates neither knowledge nor skill in the game. With authority he proposes to teach her as well as keep score.

Ultimately the trump card she holds, an ace up the sleeve, is stubborn passive resistance.

Although Weller moves with measured steps on stage he is robust and strong. His character in every sense is overwhelming when compared to the small and frail presence of the seemingly fragile and vulnerable Fonsia. Appearances, however, are deceptive as the true balance of their dramatic tension develops.

In one of the running gags of the heart warming drama he emphatically deals each hand while loudly counting the cards. She gets one extra and the first discard before drawing to reach the winning combination designated by her softly articulated “gin.”

She wins the first hand. Beginner’s luck he assumes expressing pleasure that she is willing to play and pass their lonely hours and days.

Again and again he deals a hand. There is ever more comic shuffling about until over and over she says, with restrained pleasure, ‘gin.’

Given his booming voice and machismo increasingly his pride and manhood are shredded by the passive aggression of this frail but tough little old lady.

The escalating intensity of their deepening conflict has been well paced by the director Leonard Foglia. He keeps them sharp and tart. Masterfully, he avoids the easy and obvious allowing for fleshing out, in running back stories, the depth and complexity of the characters.

At one point, just to appease him, she tries hard to lose a hand or two. But he sees the deception and is the more enraged that she has patronized him. His aggression and language escalate to a level that shocks and frightens her.

It is revealed that she had been brought up as a proper church lady and foul language deeply offends her. Until, deliciously and to the delight of the audience, she cusses him.

While contrasting their skills at a game of cards this is an analogy of the universal struggle to cope with the adversities of life. She appears to be more adept and disciplined. In his gruff, at times crude and unruly manner, Weller proves to be vulnerable and needy.

Frightened by his aggression and abusive language Fonsia declines to play the card game and withdraws what was a potentially deepening relationship.

One last game he begs promising to behave. Guardedly she relents. The final hand is dealt. He is tense with expectation. Then she leans forward and in the softest whisper, which boomed through the theater, she whispers ‘gin.’

In a battle of wits between pensioners he is never going to win. That realization and its life-affirming insights charmed the audience. The play focuses on issues that are accessible to all of us facing the endgame of our golden years.

The synergy of these seniors of the stage was inspiring and astonishing. Seeing these great artists still at the top of their game was the rarest of gifts. After long, award winning careers their artistic generosity continues to amaze. It underscored what will be long cherished as a rare evening of superb theater.

“The Gin Game” gives new dimension to the notion of an old chestnut.