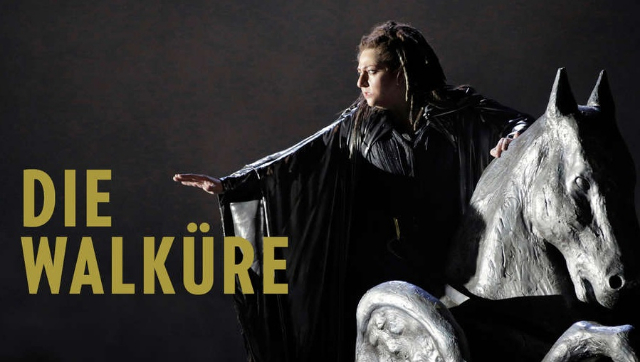 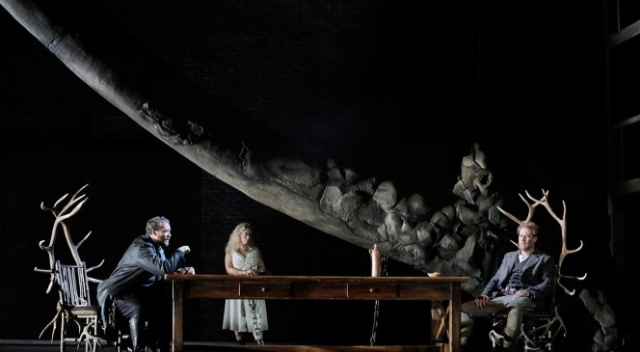 Dinner for the eternal triangle at home 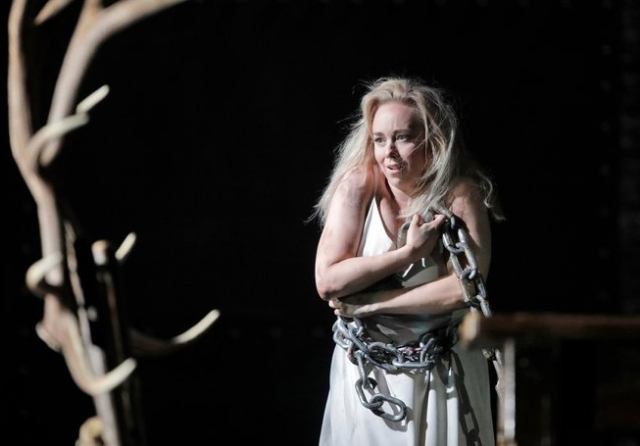 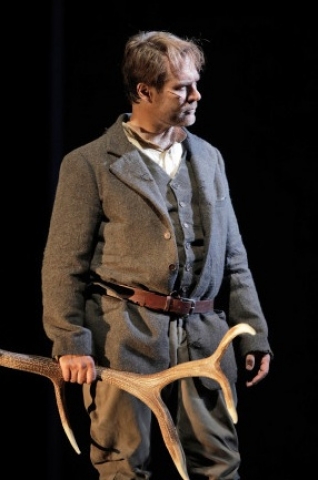 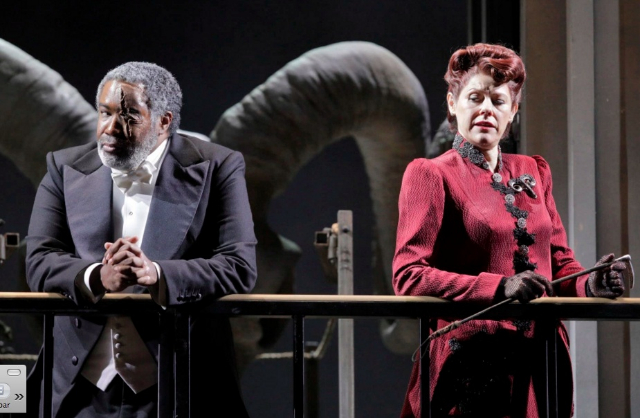 A distressed Wotan beaten down by his wife, the keeper of marital vows 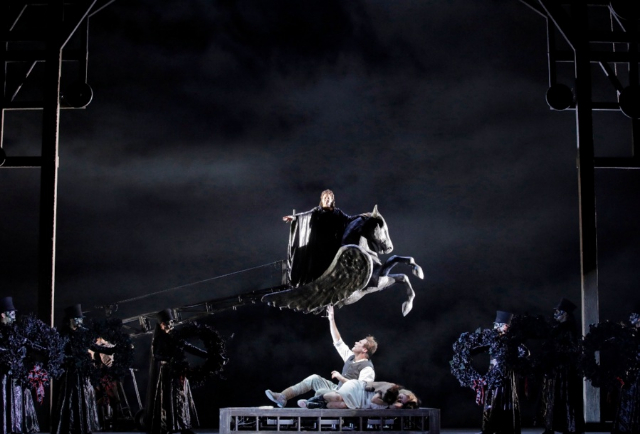 Arriving to save the future 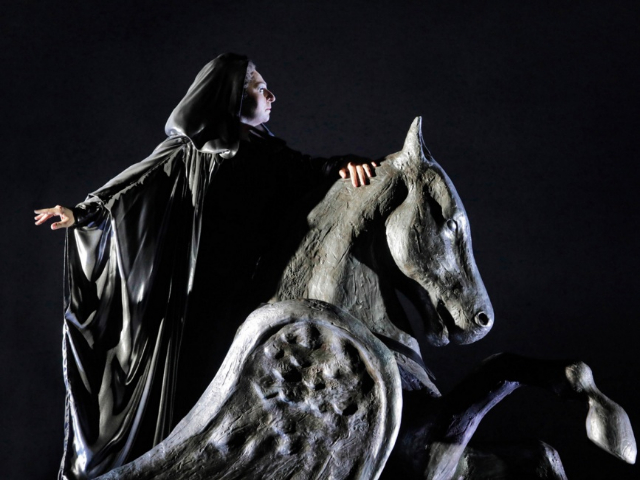 Christine Goerke, Brunhilde for the ages

Father and daughter in the best of times.

Everything about the Lyric Opera of Chicago’s second installment of David Pountney's new Ring cycle feels, sounds and looks right. Yet starting with the singing actors’ performances seems only fair. They are superb, one and all. Surely one element of opera under the control of producers is the uniform quality of singing. The Lyric Opera understands this deeply and delivers.

Several voices are new to this country. Elisabet Strid as Sieglinde is spellbinding. She has an almost helden soprano, a big voice that rides through the opera house like her savior’s horse.

Chained to the home she lives in with Hunding, the husband forced on her, she moves lithely around in containment. At times the chain is used as a prop to express her anger and rage. Her blond hair streams erratically as she rescues a wounded man, brings him home and then runs off with him at a Cinderella-like midnight moment. She is one of the most thrilling singers to cross the Atlantic in a long time.

Bass Ain Anger is new to the Lyric, but clearly comfortable there. Moments before the performance began he was circulating in costume, arranging for friends’ seats at the box office. The stage seemed just as relaxed for him. His role as Hunding is, of course, not comfortable at all, but he stormed, fumed and dictated to his captive wife in a rich, authoritative bass.

The third principal character in the first act is Siegmund. Now a Nordic blond, Brandon Jovanovich shows what hard work can accomplish. He started with a voice for the Broadway musical stage and has elevated his game to that of a powerful, lyric opera star. In the helden roles which he is taking on now, his voice always shapes the lines beautifully. As Siegmund he can rise with helden force above the orchestra. As an actor, he matches Strid’s electricity spark for spark. This brother and sister duo seem made for each other. All three singers are not only true actors, but also bring the drama into their voices, the shape of the lines and subtle use of dynamics.

Eric Owens playing Wotan enters in Act II. He is godly and stentorian. Yet often he does not take himself seriously. The words he sings in a magnificent bass are flattened, even when they express high drama. In the final scene with his daughter, he rises to the full, heart-wrenching tones the scene suggests.  He is wonderful.

Tanja Ariane Baumgartner is this cycle’s Fricka and she plays the Goddess for every dominatrix twist. She grows out of Jeanine Altmeyer ‘s interpretation, a stickler for law and order at the expense of human emotion and desire. You feel a bit sorry for the wimp Wotan in her presence. Costumed in a long scarlet suit decorated with rhinestones, Fricka doesn’t parade Wotan’s infidelities, but she makes him pay for them just like an ordinary guy. She struts her stuff vocally in each imperious step. A superb translation by Colin Ure is particularly apt in her lines. English blusters and seethes and can also be plain funny.

The only question about Christine Goerke’s place in the opera constellations is how high her position will be. She is a great Wagnerian soprano. Her performances have suited Elektra at the Lyric in Sir David McVicar’s production and also under the baton of Andris Nelsons at Carnegie Hall. When she sings, she sends shocks out through the bodies of listeners, electrifying us.

Her Brunhilde is beautifully etched. One particularly notices her arm movements, a slash of an elbow across the eyes to avert her gaze from disaster; a crooked elbow across the face to hide pain or tears. Every emotional expression is right for the moment. Every note is perfectly placed. Her consummate artistry brings forth a stunning Brunhilde.

All of the smaller roles are first rate. The Walküre sisters are delightful teens in urgent red, mounted on steel chargers, trying to protect a sister, the number one Walküre, from their father’s wrathful frustration.

Sir Andrew Davis and the Lyric Opera Orchestra outdid themselves, making the most familiar leitmotifs and tiny dramas, like the Walküre’s ride, seem fresh.

The director David Pountney speaks about making this section of the Ring human. It is, after all, about a series of intimate family relationships. About fifteen years after it premiered, Tolstoy would write that “All unhappy families are unhappy in their own ways.” A love affair between a brother and sister, a husband and wife’s struggles to survive, Brunhilde’s love of her father, and his of her. are all wrenching. Pountney has made Wagner’s story warm, human, and almost real.

Yet this is a story and Pountney has framed it as one. To do this, props being moved and lights shifted are revealed to the audience. The set by Johan Engels and Robert Innes Hopkins is a frame. At Hunding’s home the peaked roof made of steel supports is a dark presence. The home is in a forest where a felled log cuts a hypotenuse across mid stage. Flowers will grow here, as love blossoms between Siegmund and Sieglinde. A projected garden opens up. When Brunhilde arrives to find the couple, they are in an embrace in the splendor that is grass.

Tiers are present. We look up on high at a royal balcony where Fricka and Wotan hold forth.  Brunhilde first rides a steel half horse whose rear is a crane which can gallop her forward and back up and down all at once. The audience gasps with pleasure when it appears. The Walküres will later ride three of these. This crowd pleasing set device moves perfectly with the music. It is as comfortable and useful a character as anyone on stage.

Lighting, fighting, costumes and choreography all work. Fabrice Kebour’s keen use of spots to single out characters from surrounding darkness is particularly effective. Fricka, as behooves the character, got the best costume by Marie-Jenne Lecca. Wotan’s coat designs deck the house curtain in red x’s. His coat is the ultimate gift he gives her daughter before she is surrounded by flames. Interestingly, he tops it with her shielf.

The Lyric Opera has a hit on their hands, one that lasts almost five hours. It could easily have lasted ten.