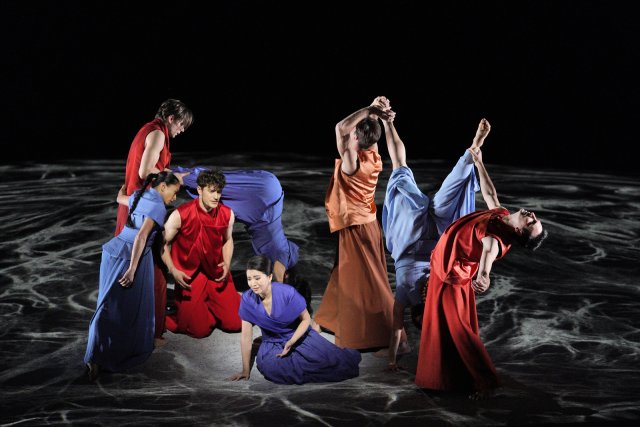 Jakub Józef Orlinski as Orpheus, Meigui Zhang as Eurydice, dancers as earlier versions of principals. All photos by Cory Weaver. 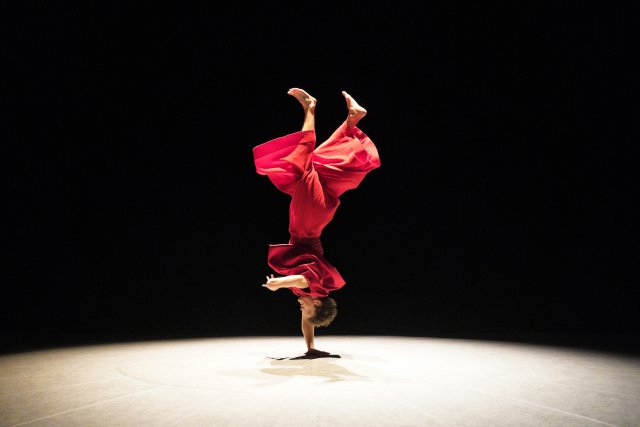 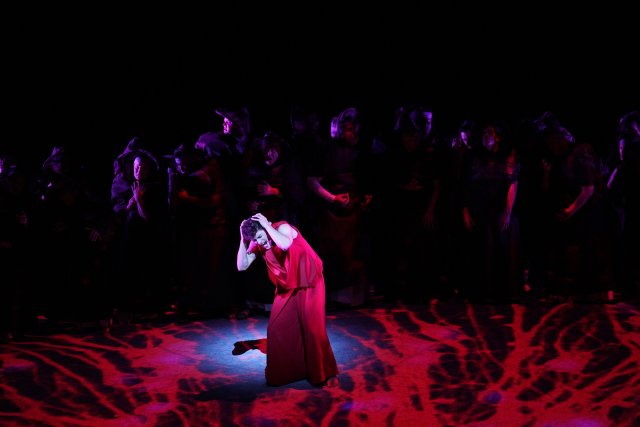 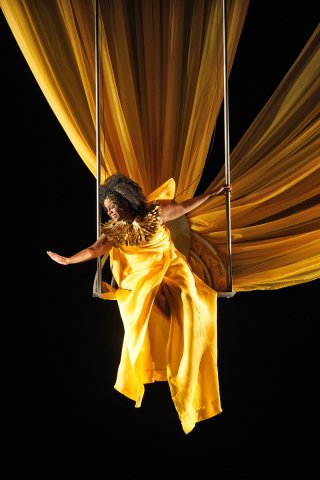 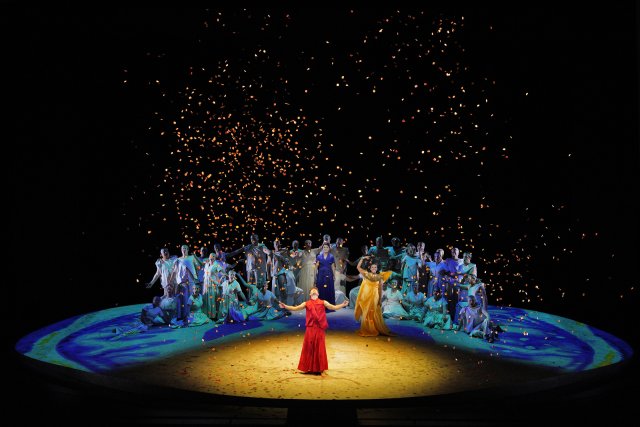 It would be a pretty good wager to bet that the reader has never seen a serious opera open with, or even contain, a break dance which includes balancing and spinning on one hand – much less that the dance is performed not by a professional dancer, but by the title character!  This unique skill performed by Jakub Józef Orlinski, as Orpheus, is merely the beginning of a San Francisco Opera production spectacular in all of its creative aspects.  Despite individually simplistic staging elements, their combination results in a striking visual experience to support the notable operatic creation.

Christoph Willibald Gluck’s contributions to opera extend beyond the merits of his individual operas.  Like Richard Wagner a century later, Gluck conceived an intellectual framework that changed the opera landscape.  Though his published formulation for reform followed the debut of “Orpheus and Eurydice,” this opera had applied the changes he would later prescribe.  It would stand as the great transition work between Baroque and Classical period opera.  And while “Orpheus and Eurydice” certainly stands the test of time, it does have some issues.

Among simplifications and elimination of restrictive conventions, Gluck specified the end of the da capo aria with stanzas in the a-b-a format, which totally repeats the first stanza, giving scope for vocal ornamentation to display the singer’s virtuosity without otherwise adding dramatic or musical value.  Also, rather than wearisome harpsichord accompaniment to recitatives, Gluck supported these less melodic tracts with full    orchestra.  Notwithstanding these reforms, Gluck’s musical foundations were laid in the past.  He continued Baroque melodic idioms, and while he avoided the a-b-a form, he did use recurring musical phrases frequently.

The Orpheus myth has been the basis for dozens of operas, but no plot could be more simplified than Gluck’s, another reform objective of the composer.  He minimized number of principal roles to the three essentials, the title characters plus Love (aka – Amore).  No subplots.  No diversions between point A and point B in the story line.  The narrative is reduced to: Eurydice is dead; Love tells Orpheus how to retrieve her from the dead; he fails to heed Love’s stricture that he not look back at her during their passage from Hades; Eurydice dies again.  But as happens in some other versions of this classic, a Hollywood ending yields eternal happiness.

With such an economic tale to tell and 80 minutes to fill, the aria lyrics may not be repeated identically as in the a-b-a format, but conceptually, they are.  For the first 50 plus minutes, Orpheus is the only principal on stage except for a brief visit from Love.  He is so distraught about his loss, that he is constantly pining away.  What is remarkable is that the librettist de’ Calzabigi could find so many ways for Orpheus to express his lament.  Fortunately, Orlinski is a world class countertenor whose presence and vocal quality carry the day with considerable vocal and visual support from the chorus.

Musically, the opera is of its time, 1762.  The modulations from Baroque format make it more listenable to those who tire of the incessance of earlier style.  “Orpheus and Eurydice” does contain one particularly memorable aria, Orpheus’s final lament, “What will I do without Eurydice?”  which Orlinski delivers with great passion.

The countertenor voice is unnatural in its harsh falsetto character and high tessitura, though Orlinski handles it admirably.  Conversely, the sopranos, Meigui Zhang as Eurydice and Nicole Heaston as Love both possess mellow instruments, and the ranges of their singing parts display the warmest qualities of their voices.

But as talented as the performers are, the creative design team distinguishes this production.  Director Matthew Ozawa relates the stage components to contemporary resonance, and his minimalistic aesthetic delivers a powerful and lush sensibility.  With Yuki Nakase Link’s sharp and everchanging lighting against set designer Alexander V. Nichol’s black back wall, the solid-colored, satin-like material of Jessica Jahn’s simply styled costumes visually pop as if a fashion show for colors.

Orpheus’s red and Eurydice’s blue outfits stand with distinction, but Love displays the real eye candy.  Not only does her yellow-gold costume sizzle with its brightness and contrast to the black backdrop, but her entrance is a dramatic swing down from the fly, and beneath her trails a drape of perhaps 20 feet of the same material.  Now that’s a real fashion statement!

Another strong visual element is Rena Butler’s choreography.  Orpheus and Eurydice are each replicated by three dancers wearing costumes in different shades of their respectively assigned colors to represent different stages of the couple’s relationship.  The many dances are evocative, stylistically dominated by the herky-jerky motions of Orpheus and the sensuality of Eurydice.  The chorus’s movement and posturing add another dramatic element, as does their monochromatic sea of color, whether white or black, but often altered in appearance by colored lighting.

Although conflict dominates the action of the opera, Gluck offers a positive overarching outlook.  He posits the magical power of music and the heroic nature of the musician.  And though the possible price of giving in to temptation is clear, he demonstrates his belief that suffering grief will ultimately be rewarded with happiness.  Let’s hope he’s right!  In the meantime, we can obtain much happiness by enjoying this sterling production.