Frank Stella at the Whitney 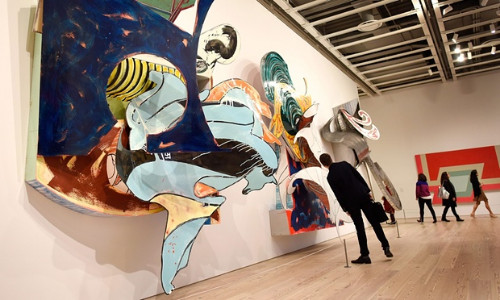 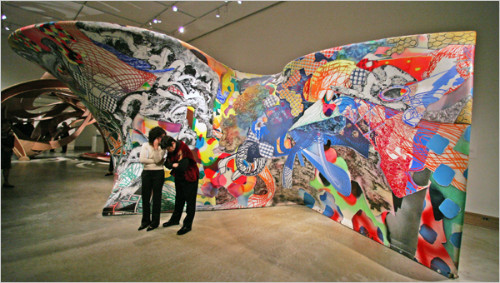 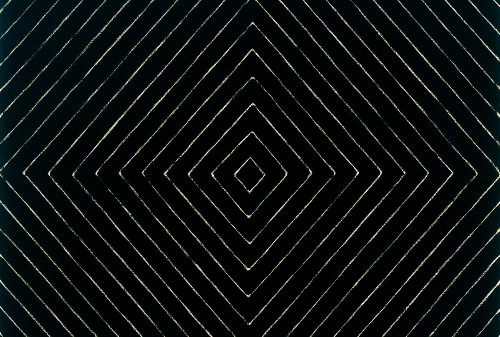 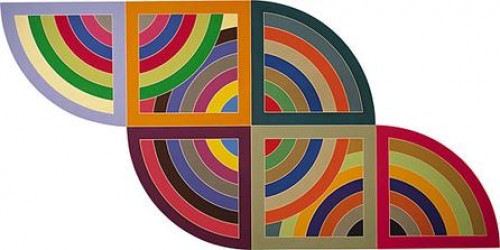 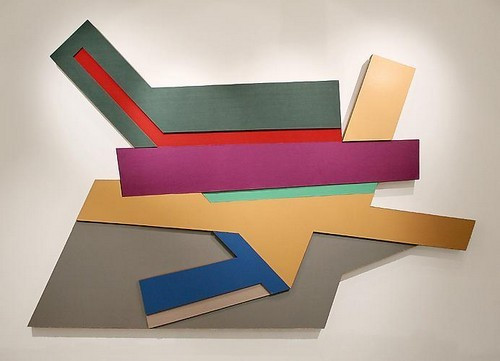 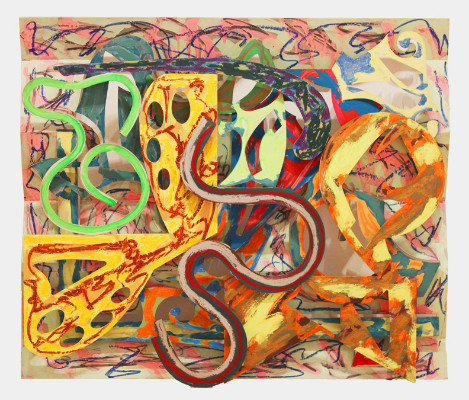 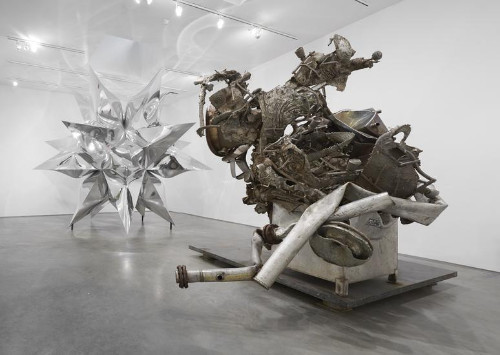 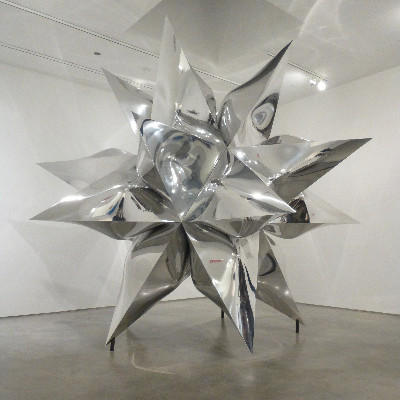 It is interesting that Stella has a retrospective at the same time that Zombie Formalism is reigning supreme in the contemporary art scene. The shadow of Stella’s early painting haunts their work and functions as a ground upon which these artists build their imagery. But it is not a ground with which they engage in a dialogue or agonic surpassing but a blatant copying. Whereas Stella’s work cut itself away from the Cartesian doubt of most Modernism and cut out for itself a role of being emblematic of the modernist and positivistic hegemony of America triumphant, the Zombie Formalists express a sort of redundancy where the present keeps repeating itself in a circular loop: Stella ad infinitum.

Stella makes it easy for abstractionistas to fall back on his work as a formula for “abstraction making”, in that he already excised color and form from their grounding in the perception of reality. Instead of a panoply of color that works dynamically out of the complexity of color perception, he uses a rules based strategy limiting their number and form as though pre-selected from a color-aid pack.

This simplicity of color choice goes hand in glove with a simplicity of form. Moreover, his self-consciousness early on about the shape of the rectilinear canvasses’ relationship to the forms conveyed within, leads easily to imposing the form making to the canvasses shape. Again,, it is his ignorance, willed or otherwise, about how colors interact with each other that frees him up to deal with the canvas as abstract form.

I recall years ago meditating on his black canvases and realized that this absence of any activity of push and pull between colors resulted in the objectification of the canvas leading to the canvas beings perceived as a shape on a white wall. Object among other objects, including the humidity meter. An absence of a metaphysical pointing out from the canvas to another realm keeps the canvas in a pragmatic realm of just being a physical shape on the wall.

You can see this same strategy pursued by Ellsworth Kelley, who eventually deconstructs the support reinforcing its materiality, which is not the road Stella goes down. He could have gone there but for the haunting of the majesty of Baroque painting that turns him toward a pursuit of complexity and expansion off the wall out into space. He identified more with the overweening confidence of those Baroque artists than with the self-reflexive doubt that motivated the early Modernists. The artists of Rome had the majesty and power of the Church to buoy them up. Stella had the absolute domination of a positivist scientific world view promulgated by the most powerful nation in the world to launch him into an enormous expending of materiel.…

An understanding of the relationship of Stella to his own antecedents is clarified by studying his influence on the Zombie Formalists. Stella and the Zombie Formalists ignore core aspects of their sources. Stella abandons the optical self-reflection that formed the core of Mondrian’s artistic progress in order to use color as just shapes to play with. Within the paintings of the Zombie Formalists any notion of play found in Stella is abandoned so as to foreground a ghostly use of Stella as commodity.

Interestingly enough, working backward hermeneutically from the dry commodification of the Zombies, the playful aspect of Stella in contrast seems to become a more salient aspect of his work. It is as a whole the product of homo ludens and is therefore more optimistic and out of sorts with the cold cynicism of the zombie zeitgeist. The retrospective seemed out of sync on so many levels with our times and lead me to understand why  even the goofy playfulness of  Koons has to be couched in postmodern cynicism to be successfully marketed in this day and age.

Derrida coined the term hauntology (a play on ontology) to express how the past informs the present in a post-ideological world. The enormous crucial battles of civil and individual liberation are over; there is just the road of ever more efficient technological functioning and communication. Heroic notions of humanity or the working class  fade away as an ever more wired society keeps mankind integrated into the mechanism of the industrial state. Since the priority of this state of being is ever more efficient functioning, it is in its interest to obliterate any connection to the past that could slow it down.

Although other modes of being that once existed come back to “haunt” the present, and we can try them on or play around with them, they do not define our essential mode of being in the world. Or maybe they can only be recycled in the current cynical mood as Stella has been by the zombie formalists or as John Currin does with the style of the populist Thomas Hart Benton. The goal is to empty them of meaning so that ultimately private domains once explored in painting cannot escape being mechanized or function ever again as possible sources of individual self-realization.

Melville’s story of the great white whale is often seen as a study and critique of capitalism. Ahab is only interested in his private quest and is clever enough to convince his crew to go along with him. Melville is somewhat ambivalent about the morality of this exploitation as he feels we all exploit someone below us even as we are exploited.

In my reacquaintance with the book several years ago what struck me was that the crew and Ahab are two different species of mankind. The crew is close to its surroundings ready so as to react to changing circumstances. When a sailor is knocked overboard on the shuttle out to Nantucket, Queequeg without prompting jumps into the icy November waters to save him. The crew create bonds among each other instinctively knowing that their survival depends on being a band of brothers. They feel the palpability of the world as much as Ahab ignores it. For him everything is metaphysically abstract and involves goals that move the crew toward a denouement far from the practical goals of whaling.

There is an analogy here to Stella and his relationship to the long optical tradition of western painting. The crew of the Pequod, which experiences a hands on feel for the world around them, is not experienced by Ahab in its essence but is manipulated and ignored in the way Stella’s colors are abstract in the worst sense, derived from color-aid packs, not the way color is experienced in the eye as you see in Bonnard, Matisse or Cezanne. He has left artistically the sensuality of being in the world behind in order to fulfill what he sees as his manifest destiny to occupy more and more space.

His formal elements are not achieved but imposed as he piles patterns on top of patterns. If there is an analogy in Stella’s lack of grounding in the sensual it fails in comparison to Ahab himself. Stella does not live up to the ascetic delirium of Ahab. The journey he takes us on is neither majestic nor exhilarating. There is no hint at the void that lies under all of his exploits. At most Stella is a good engineer. Ben Davis in his spot on review of the show mentions a thesis Stella wrote at Princeton. Its bearing on his achievement is interesting to mention:

In that long-ago Princeton theses on Pollock and Celtic ornament, Stella claimed that the formula for "art" was pushing decoration to the point where it transcended itself. The knotted pyrotechnics of these final pieces certainly do that—it's actually hard to think of a space where they would work as passive décor. It's just that the direction they transcend decoration towards is the domain of theme parks and Broadway bombast. That is, spectacles built not to savor but to stun, not for connoisseurs but for visitors passing through.

The title of Davis’ essay is “All Style no Substance”. It raises questions about what is substance, what is substantial. The word can be better understood if broken down into “what stands under”. A meditation on what is substantiality and its relation to Stella’s work would be of interest to the connoisseurs and would make an engagement with the work of Stella worth their while if his work were at all engaged in that questioning itself. To savor such a discussion would be to linger, not to pass through.