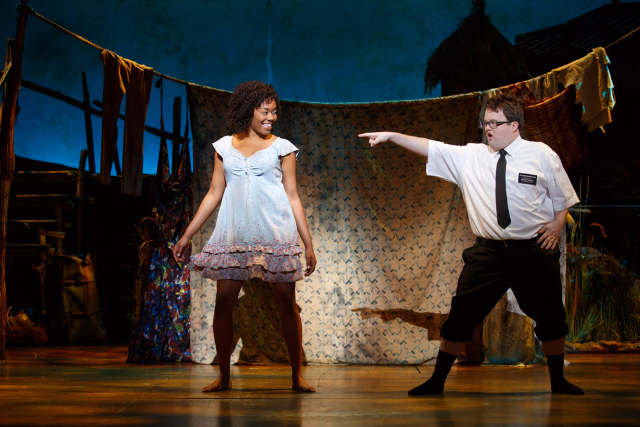 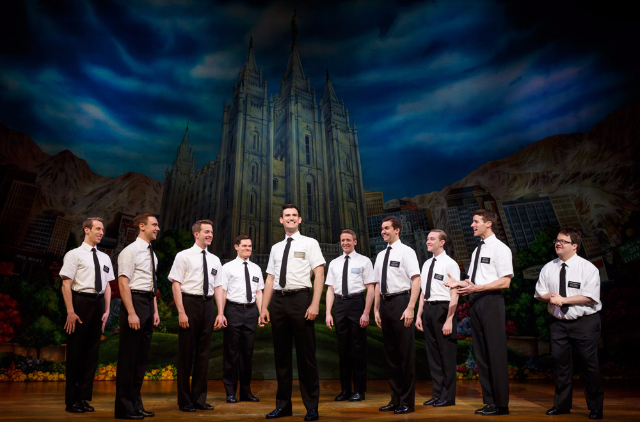 (Picture courtesey of bookofmormonbroadway.com/tour) The elders of The Book of Morman prepare to head out on their assignments.

No matter how many times you’ve seen The Book of Mormon, the musical phenomenon feels more uplifting, encouraging and vital this time around.

At this writing, more than a month has passed since a terrorist in New York City proclaimed God’s greatness. He then killed multiple pedestrians by running them over with his vehicle. It was as though he were using his proclamation to kill people and forever shatter the lives of those left behind.

So how refreshing and cathartic it is these days to witness a musical, even for the umpteenth time, that seeks to uplift lives and add meaning through faith.

The triple-threat actors convincingly inhabit their characters, turning in energetic portrayals that make it clear this musical is a satire.

The performers also demonstrate strong, vibrant dancing skills, especially during a tap dance that will remind you of 42nd Street. Their expressive, rangy voices reverberate throughout the auditorium. An energetic live orchestra accompanies them. Sound is sometimes a problem; it’s hard to understand lyrics, which may or may not be the orchestra’s fault.

“We missed you too, Miami,” reads a sign outside the Adrienne Arsht Center for the Performing Arts Center of Miami-Dade County.

The venue is home to the touring production through Dec. 3. Your first and correct instinct is to return its love in a tight embrace – especially after the aforementioned terrorist turned Halloween into a real night of horror for multiple families who lost loved ones.

They were out for a stroll on a bike path. Perhaps they’d even planned to see the The Book of Mormon on Broadway. The musical won nine Tony awards, including Best Musical, in 2011.

The show, from the creators of South Park and Avenue Q, may seem disgusting and blasphemous to some. But this is a show with its heart exactly where it belongs.

Beneath its foul language, stereotypes and seeming sacrilege, the musical’s writers drive home a hope-filled message: Faith doesn’t have to be blind and dogmatic for folks to find uplift through spirituality. Belief can mean whatever moves people to find a deeper purpose to living.

Those seeking meaning in the musical are poor African villagers. They live in hut-like homes. Disease and unsanitary conditions plague them.

The villagers are thirsty and starved. They’re short not just on things we take for granted. These people seek reasons for living and believing that better times lie ahead.

Enter Elders Price and Cunningham. They are two young missionaries assigned to convert the villagers. The former (a taller, driven, conflicted Robert Colvin for the reviewed performance) is the more serious, business-like of the two.

The shorter, stockier missionary, Cunningham (a goofy, chubby, spaz-like and thoroughly endearing Conner Peirson) is a non-stop barrel of laughter.

The missionaries’ goal might involve bringing “non-believers” to the “right side.” But what does that mean? For the character of the Mission President (a proud, polished but arrogant Ron Bohmer), it means following ever word in the book. For the beautiful villager Nabulungi (a sensitive, eager, hopeful Kim Exum), faith is something as simple as “Sal Tlay Ka Siti.”

However, to the innocent villagers, it’s a paradise free of problems – kind of like a Camelot, perhaps, only with a spiritual aspect included. To the villagers, “Sal Tlay Ka Siti” may not even exist. But thanks in large part to Elder Cunningham, Nabulungi and her fellow villagers receive a taste of the effect a “Sal Tlay Ka Siti” can have on their lives.

That pronunciation of the city in Utah, part of the musical creators’ gentle fun with the sheltered villagers, is the title to one of the musical’s “I Want” songs.

As Nabulungi sings it, a wide-eyed, smiling Exum, with a soft, tender voice, exudes a dreamy longing. She makes us root for her to find her own “Sal Tlay Ka Siti” -- even if it’s only a metaphor for a better tomorrow.

The gently moving song, part of the varied, tuneful score with character-revealing numbers, is one of the numbers that call to mind the optimism evoked by “Tomorrow” from Annie.

Speaking of musicals, The Book of Mormon lovingly sends up many of them, including the one about the red-haired orphan.

The show also suggests that people often find spirituality and meaning through theater-related activities. The Book of Mormon includes a show-within-a-show. In it, the villagers re-enact their version of the founding of Mormonism. The skit, choreographed with flair, brings to mind “The Small House of Uncle Thomas,” from The King and I. But in The Book of Mormon, the skit players are met not with favor, but wrath from those who’ve come to watch.

They include the Mission President, who represents strict, dogmatic adherence to Mormonism.

To him, the villagers and the Elders might as well shake hands with the devil.

The Mission President, and his unbending beliefs, is among the people and ideas the musical’s creators satirize.

Musical creators Trey Parker, Robert Lopez and Matt Stone don’t let the missionaries off the hook. They depict Elders Price and Cunningham as flesh and blood, imperfect human beings with much to learn.

One of the funnier scenes with eye candy is set in purgatory.

“Spooky Mormon Hell Dream” is something all the missionary characters in the musical claim they’ve experienced. Hey, none are angels and the musical’s writers and the actors playing them, make sure we know that.

But as has become painfully clear these days, some are due sharp teeth.

The National Equity touring production of The Book of Mormon continues through Sunday at the Adrienne Arsht Center. For performance times, dates, prices and future venues, visit  http://bookofmormonbroadway.com/tour.