At the Lyceum Theatre 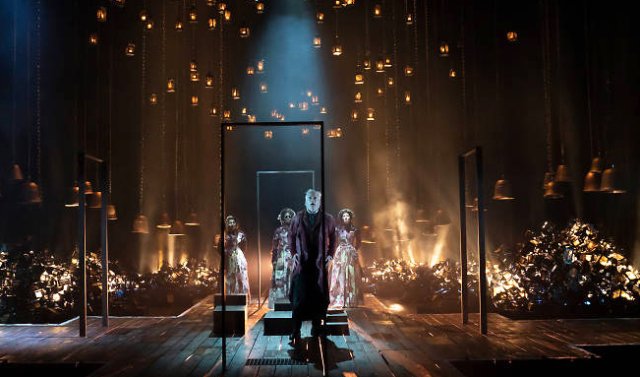 Even if you have sworn to never see another production of A Christmas Carol, you need to break your vow and head to the Lyceum Theater for this wonderful production of this classic. The limited engagement is through January 5.

The adaptation by Jack Thorne has become a holiday staple at London’s Old Vic. Now it has crossed the Atlantic with an American cast directed by Matthew Warchus.

From the moment you walk into the theater you will be transported to 19th century London. On stage is a quartet of musicians playing period music and everywhere you look, lighted lanterns are hung. The cast in their period costumes roam the theater distributing clementines (with little bags for the peel) and cookies. The thrust stage allows the performers to be close to the audience. You will notice chains hanging towards the back of the stage and on each side, two piles of trash. But watch out, these become much more later on.

The play opens with most of the cast, in black, choral speaking the introduction.

The introduction completed, we are swept into the story of Scrooge, Marley, and the ghosts that help Scrooge relive his life and reevaluate it.

It is the traditional story, with a few minor adjustments that do not affect the piece. Campbell Scott is a fine Scrooge; he doesn’t try to humanize the man before it is time to; he is irascible and unchanging for all of the first act. The ghost of Christmas past and the people that Scrooge revisits – from his unloving father, to his first employer, to the girl he loved (Belle) are not in bright colors; they are in the somber tones of winter in London. Andrea Martin is a fine ghost of the past, not allowing Scrooge to escape. And he does try to escape. This is not a docile Scrooge.

LaChanze is the ghost of Christmas present with at accent that seems to combine Cockney with the Caribbean. It was the only slightly jarring note that you quickly stop wondering about it.

But it is act two that becomes truly memorable. As Scrooge begins to reform himself, he doesn’t get giddy or humorous, but more human. And the stage follows suit. The chains rise into the rafters, the piles of trash light up like Christmas trees, the musicians continue, including hand bell interludes which involve the entire cast. The audience is enlisted to help with the setting up of the banquet. How that is accomplished brings” ohs” and “ahs” from the audience. So much so that the ushers are on high alert to keep people from taking videos.

Overall the cast is fine with Scott making the character his own. Two young actors alternate as Tiny Tim; each has cerebral palsy so Tim’s disabilities are very real.

Rob Howell’s set and costume design are wonderful, but his work is aided by the fine lighting of Hugh Vanstone, the sound design by Simon Baker and the music composed, orchestrated and arranged by Christopher Nightingale. Traditional carols are integrated into the music; this is not a musical but a production where music permeates the environment as it does during our holiday season.

Every production seems to bring out something new in the story. Thorne and Warchus seem to have brought out the sterility of Scrooge’s life and his growing realization that money is not the object, but how it can help the world is. It may be a message for today or reflective of our current environment. It leaves you feeling inspired.

I hope this production will return for many holidays seasons.

A Christmas Carol is at the Lyceum Theatre, 149 west. 45th Street. Tickets are available through Telecharge.