At Custom Made Theatre 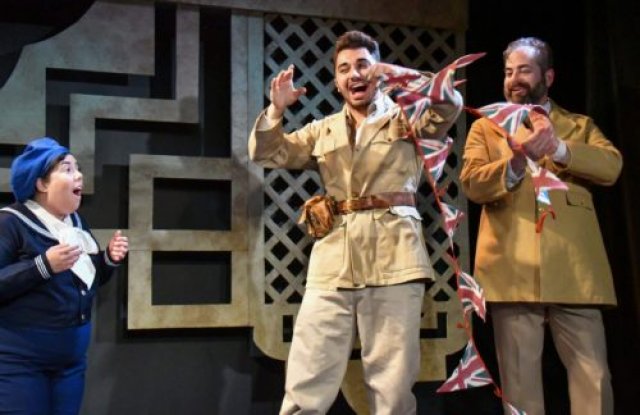 Caryl Churchill’s Cloud 9 appears at Custom Made Theatre. Let’s dispense with the broad brush evaluations first. The playwright is one of the most provocative forces in modern theater. This play is a searing indictment of British governmental institutions and social conventions that lands every punch. The staging is bare bones, but uses platforming to add dimensionality to the small stage.  Candice Liao’s 19th century and modern costumes produce the visual effect that is needed. The seven actors are, without exception, superb and well directed by Allie Moss. This farcical dramedy touches many nerves and definitely warrants seeing.

That said, what makes many of Churchill’s works distinctive and what helps in understanding them is her frequent non-traditional approaches to time representation and to casting. At one bookend in her casting eccentricities is the 2012 Love and Information. Comprised of over 50 rapid-fire sketches, she writes over 100 characters without specifying name, age, gender, or ethnicity. She leaves it to the poor director to sort things out, having to cast and assign a handful or maybe a dozen actors to play all of the parts.

At the other extreme, we have 1979’s Cloud 9. First, we should note that its Act 1 takes place in a British colony in Africa in 1880, while Act 2 takes place in London in 1980. As a device to retain several key characters from the first act to appear in the second, the carryover characters are only 25 years older, even though 100 years have passed. But with this play, the playwright’s staging directions dictate several casting requirements that are key to appreciating her intent.

Act 1 centers on Clive, a colonial administrator. Played with classic, self-indulgent bravado and bluster by Evan Winet, he reinforces every rigid, stultifying rule about the way the entrenched class thinks things should be. He thus represents everything that Churchill finds backward and banal in British behaviors, especially in colonial and sexual politics. He is surrounded by stereotypes from the daring adventurer who touches base with “civilization” only occasionally, and the son who doesn’t live up to the father’s sense of masculinity. But beneath the resulting veneer of propriety in Clive’s circle, sexual assignations of all varieties and deviations occur among the characters – left, right, and everywhere.

In the first critical casting requirement, Clive’s wife Betty must be played by a man, which is handled with great flair by Mario Mazzetti. This wrong-gender portrayal reflects both sexual oppression in society, with the prevalence of male dominance, and sexual repression, as suggested by the homoeroticism of many men wanting women to be more like men. Historically, men were often unable to establish friendships as equals with women, but only sexual relationships. They typically preferred the company of men, which particularly occurred in enclaves to which men are drawn, such as the military. Non-sexual inhibitions between sexes subsided and are depicted in the time frame of Act 2.  The trend has accelerated since then.

The other important casting specification is that Clive’s butler, the black African Joshua, is to be played by a white man. Alan Coyne is commendable as the reserved butler with the stiff upper lip. The color anomaly aligns with Joshua identifying as having the soul of a white man. He has even repudiated his own tribe and family as being bad, leaving him on an island to himself. Sadly, it is hard not to relate this condition to the likes of Supreme Court Justice Clarence Thomas, whose archconservative judicial positions seem designed to distance himself from his black heritage, as if, through his denying any special concessions to blacks, that whites will truly see him as one of their own.

Act 2 is dominated by the relationships of couples, touching on straight, married, divorced, gay, and lesbian, but in modern London society, these relationships are commonplace and in the open. The major casting quirk here is that the actor playing Clive, who was at the top of the heap in British Africa, is now a girl child at the bottom. Is this a comeuppance to the old social order? Other characters from Act 1 are now played by different actors, which can cause a little confusion, and the tone in Act 2 differs from Act 1. Now, there are fewer laughs, and with the exception of the jolting representation of the girl with a middle-aged, bearded man, the casting is gender conventional.

One player that deserves special mention for her fine acting, despite not dealing with a gender-switch part, is Renee Rogoff. Playing three roles, her minute movements, subtlety of facial expression, and welling up reveal a serious commitment to her acting art and a deep connection with her emotions. Her deft portrayals are a great example of why some of the finest theater experiences can be enjoyed in intimate venues like Custom Made. The three other players not already mentioned provided fine service and also deserve recognition. They are Alejandra Wahl, Monica Cappuccini, and Zaya Kolia.

The title Cloud 9 seems a bit anomalous, as the phrase usually refers to a state of elation, which hardly describes any of the characters in the play or the overall state of affairs as the playwright sees it. Whatever her intent on this count, she created an important piece of theater that receives a good rendering.

Cloud 9 by Caryl Churchill is produced by Custom Made Theatre and plays on its stage at 533 Sutter Street, San Francisco, CA through December 15, 2019.