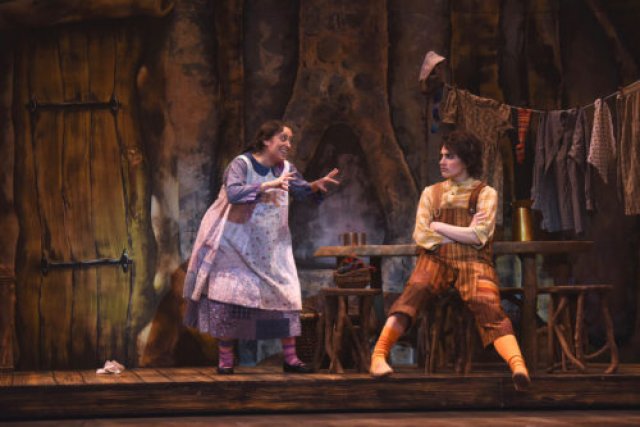 Adults, especially those without accompanying minors, may be forgiven for nursing trepidation over their first Hansel and Gretel. Most of us know that it’s a “children’s opera.” We’re familiar with the basic story – kids lost in forest; kids abducted by witch; kids push witch into oven. We certainly know opera’s most sung tune, the treacly “Evening Prayer,” and maybe the little dancing ditty with the “tap, tap, tap” and “clap, clap, clap.” But take comfort, ye fearful ones. When composer Engelbert Humperdinck presented his score to the man who would conduct the premiere of the opera at the famed Weimar Hoftheater, the latter declared it a masterpiece. That conductor would produce a fair few masterpieces himself. His name was Richard Strauss.

Opera San José’s production is specifically designed to be family friendly. The opera is sung in English and the supertitles are given in pretty basic vocabulary. Yet, only 15% of the audience is children, so adults, do feel welcomed. It is a quality production, beautifully staged and sung, that will satisfy audiences of all ages and levels of opera understanding.

Humperdinck (this was the composer’s real name, not so the pop singer of recent decades!) was induced to write Hansel and Gretel by his sister. She had loosely summarized the fairytale from the Brothers Grimm, and asked him to compose a score built around her libretto and several German folk songs. And the rest, as they say, is history.

The composer was a disciple of Wagner, which comes through in the leitmotifs and the color and orchestration of the opera from the opening overture. Having a strong brass element with successive building crescendos, the overture introduces the main themes of the piece. And this reviewer withdraws the pejorative characterization of the “Evening Prayer.” Its strains are powerful in the instrumental excerpts from the overture, and later, the harmonies in the children’s duet around the unforgettable melody are simply beautiful and beautifully delivered. The music, while simpler than much in the world of opera, is nonetheless, serious, melodious, and pleasing.

Interestingly, though Hansel’s name comes first in the title, Gretel has the slightly larger role, and she is clearly the taskmaster and the more responsible of the two. Perhaps this was driven by the fact that the libretto was developed by a woman and the target audience was her daughters. In any case, both roles are traditionally sung by females. Soprano Elena Galván is Gretel, and the youthful agility of her voice suits the role. Due to illness, mezzo Talin Nalbandian stepped in to sing the role of Hansel. Her imitation boyishness works well and she has perhaps the most appealing voice in the cast, but she needs stronger projection for a house the size of the California Theatre.

The omnipresent Eugene Brancoveanu is The Father, and it is understandable why he is so in demand. Seemingly without effort, he amps up his clear baritone voice without compromising its richness. The “worth the price of admission” performance is that of soprano Kerriann Otaño. As The Mother, her dramatic, Wagnerian vocalizations pierce the sky. But in a wonderful casting decision, she also plays The Witch. Her penetrating voice, her sweeping physical gestures, her bold facial expressions, and her cackling laughter create a delightful and indelible impression. An added dimension to Otaño’s dual mother/witch roles provokes thoughts about multiple aspects of personality that we all have. Other messages to children are typical of the fairytale idiom – family, responsibility, honesty, redemption.

The production is charming. The light-hearted features in Larry Hancock’s set counter the ominous backdrop of the gnarled, leafless trees. The gingerbread cottage stands out, as well as the oven. Rather than the kitchen variety, there stands a giant, outdoor kiva-like fireplace, looking like an animated angler fish’s face with a grill made of interlaced spiky teeth. Billowing smoke completes a striking look for the device that will turn the witch into gingerbread. A nod also goes to Elizabeth Poindexter’s costumes, especially the look created by fourteen children as wood nymph angels. On the darkened stage, they carry lit orbs and wear a number of delicate lights as garlands, resulting in a striking vision.

Hansel and Gretel composed by Engelbert Humperdinck with libretto by Adelheid Wette and based on a Brothers Grimm fairytale, is produced by Opera San José and plays at the California Theatre, 345 South First Street, San Jose, CA through December 1, 2019.

Posted courftesy of For All Events.