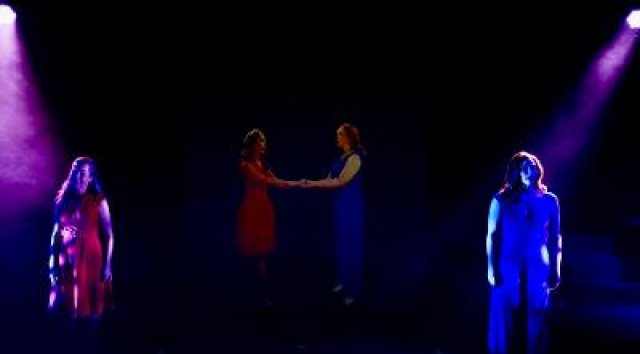 Photo courtesy of MNM Theatre Company Thanks to technology, actors are able to look as though they’re near each other, and even holding hands, in MNM’s Closer Than Ever.

The telling and timely stage picture appears at the end of West Palm Beach-based MNM Theatre Company’s current creative and energetic online production of the heartfelt, award-winning Off-Broadway musical revue Closer Than Ever.

Specifically, on screen, we notice four individuals in darkness. Through the wonders of technology, director Jonathan Van Dyke positioned them seemingly one above or below each other. Further, they appear safely distanced, standing on either side of a square. There doesn’t appear to be any ground upon which they are standing. And they are looking inside the square at themselves – mask-less, and standing close enough to hold hands.

To Van Dyke’s credit, the image clearly symbolizes the time in which we are living. Surely, some of us figuratively feel as though we have no steady ground (or any ground) upon which to stand. Moreover, we might find ourselves thinking back to the time when it was completely normal to stand within inches of each other, hold hands, or even embrace. Or, depending on your viewpoint, we might be looking ahead to the time when such acts once again become safe and routine.

Come to think of it, people often move forward, remain in the past, or stand stuck somewhere in between. They’re unsure whether they should forge ahead with a daring project, or hold fast to routine’s predictability and seeming security. Sometimes, opportunities and challenges present themselves. Other times, we face obstacles, and heartbreaks.

Rich imagery and symbolism suffuse Richard Maltby Jr.’s lyrics in Closer Than Ever. MNM is streaming the show, which has mood-enhancing music by David Shire, through Dec. 31. For example, doors serve as a metaphor. And in this production, doors seemingly float on their own, in and out of the performers’ pathways. This might reinforce the notion that in everyday life, our “doors” are unpredictable. For instance, we never know when an opportunity will present itself, or when a stumbling block will deal us a setback.

In an e-mail, Van Dyke wrote that if he had chosen to present Closer Than Ever live onstage, with the performers distanced, the production would lose potentially intimate moments. Instead, “streaming the show was our way of moving forward, but we are looking forward to doing it live on stage when the time is right.”

Fortunately, Van Dyke found a way to make the actors appear as close to each other as possible. That can be important in a show exploring the everyday struggles of love in the modern world. From unrequited love to obsessive love, Closer Than Ever, a sung-thru song cycle, addressing topics to which many of us should be able to relate.

Some directors might stage a musical revue in such a way that it becomes little more than a concert. But under Van Dyke’s guidance, MNM’s cast performs a show with plenty of movement and smart acting choices. Through telling facial expressions and vocals, the performers don’t just sing to show off their robust, expressive voices; they portray characters. As a result, in this production, Closer Than Ever becomes a series of playlets in song. True, there aren’t any narrative transitions or threads to thematically link the songs. However, this actually works in the show’s favor. Indeed, our lives are often a continuous cycle of uninterrupted occurrences, with no apparent links.

But in this production, the characters’ bonds are convincing. Individually, they come across as relatable people, thanks to strong performances and Van Dyke’s sensitive direction. Also, the performers sing composer David Shire mood-enhancing, varied songs clearly and expressively. Music director Eric Alsford backs up the performers with his strong piano playing.

The female cast members, in particular, create strong female characters. For instance, in one song, Shelley Keelor oozes sarcasm and offers a fiery performance as a woman deeply hurt when her boyfriend highly compliments her – only to later ask whether the couple could merely be “friends.” Instead of playing a victim, Keelor makes her character stand up for herself and tell her partner in no uncertain terms how she feels. Listen carefully to Keelor sing; she demonstrates an ability to growl, which adds a swagger to her characters.

Meanwhile, Aaron Bower, at one point, seems sincerely serene and at peace as a woman surrendering, without complaining, to the life which she has lived.

During another song, Elijah Word’s wide eyes dart from one spot to the next when he sings as a character whose obsession with a woman has caused him to do crazy things. His facial expression might suggest that the character scared himself with his antics.

Johnbarry Green convincingly conveys a harried demeanor and projects a robust presence. In addition, Green is touching and heartfelt as one of his characters fondly recalls his father’s piano playing ability. In particular, you’ll marvel at Green’s ability to hold a note for an impressively sustained amount of time at the end of one song.

The “stage” is often dark, but gets lighter toward the end. And the set design is basic, consisting mostly of those moving doors. Surely, doors, walls, and distance separate people from their loved ones during this pandemic. And some of the lyrics to “Doors” might describe how we’re feeling: “In front of me now (In front of me) is an open door. I’m moving ahead. Not sure of the way. And yet there’s a light that I’m heading for.” In fact, the door may seem “closer than ever” — just as we may feel closer than ever in our common desire to gather again.

MNM Theatre Company, a not-for-profit professional company, is streaming Closer Than Ever for on-demand viewing thru Dec. 31. For tickets, visit https://www.showtix4u.com/event-details/41307.