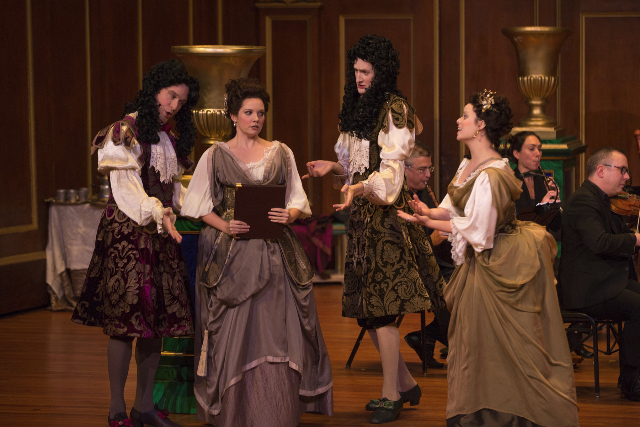 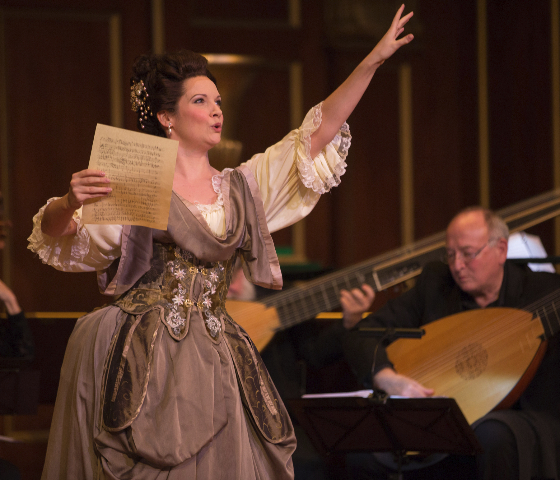 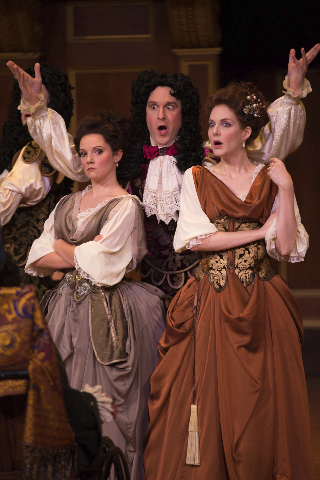 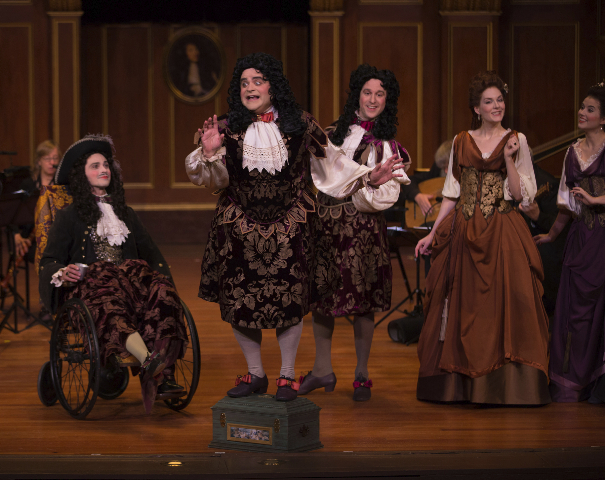 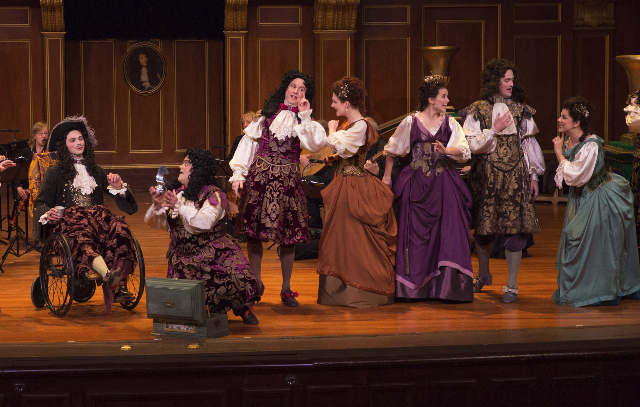 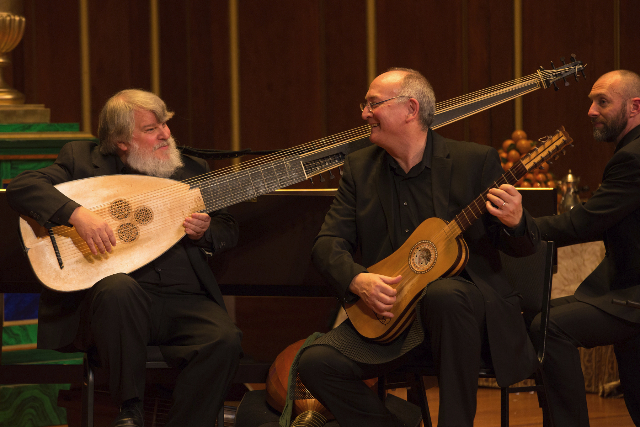 For lovers of early music in the Boston area, Thanksgiving weekend has come to mean not just turkey and cranberry sauce but the Boston Early Music Festival’s annual Chamber Opera Series. Now in its ninth year, the series has brought inventively but minimally staged and opulently costumed productions of short operas from the baroque era to the local stage. Often light in nature – although Purcell’s “Dido and Aeneas” and Monteverdi’s “Orfeo” capture the essence of tragedy in their brevity – they tend to charm and leave happy memories.

Although the festival’s biennial centerpiece opera – this coming June featuring the North American premiere of André Campra’s “Le Carnaval de Venise” – gets the props internationally for scholarship and ambition, the operas performed in the Chamber Opera Series tend to be the popular favorites. They don’t make the demands on the audience the evening-length obscurities resuscitated by the festival do every two years, and because they feature the same, shifting singing ensemble year after year, they tend to have an intimate, familiar feeling. The festival gets kudos for having assembled the group of mostly Boston based singers and instrumentalists and showcasing them every late November, giving the audience the opportunity to get to know them and watch their development. (It is true that many of them came to the festival with already growing careers in other companies here and in other cities.) Today, several of them can boast of international careers, but they tend to remain loyal and return to Boston as often as their busy schedules allow. And Boston early music lovers are the beneficiaries of the synergy between the organization and the musicians and performers, adding a crucial third element: an enthusiastic and informed audience. A good time is usually had by all.

Two other points before we move on to discuss “Versailles.” Because the chamber operas are done with small forces – 12 singers and 11 instrumentalists in “Versailles” – and without sets, they are relatively easy to tour, and over the past few years, productions have traveled to New York City, the Berkshires, the West coast and France. And they get repeated here in Boston. Often this year’s Thanksgiving weekend premiere gets a second hearing the next year during the weeklong festival, which is exactly what’s happening with last year’s pair of Pergolesi intermezzi – they will be reprised during the festival in 2017. This is good for audiences both here and on the road, but it is also good for the musicians, giving them the opportunity to get to really know the works. The other point: the BEMF recording of a Chamber Series Opera, Marc-Antoine Charpentier’s “La Descente d’Orphée aux Enfers” and “La Couronne de Fleurs,” won the Grammy Award for Opera in 2015, the first time a work from the Baroque era was so honored, not one of the festival’s fully staged festival productions. (Although if they had asked me, I would have given the award the next year to the CD of Agostino Steffani’s “Niobe, Regina di Tebe,” which featured celestial singing by French countertenor Philippe Jaroussky.)

OK, onward to our weekend in “Versailles.”

The two stand-alone works, “Les Plaisirs de Versailles” by Charpentier – a BEMF favorite – and “Les Fontaines de Versailles” by Michel-Richard de Lalande, an obscure work by an obscure composer, are both trifles, works of flattery composed for King Louis XIV’s private chambers or “appartements,” which were centers of creative life at his opulent new palace outside Paris (the forerunner of Mar-a-Lago). “La Couronne des Fleurs” from that Grammy-winning pair of Charpentier works was also a work of flattery, nymphs competing in writing verses in praise of the monarch. A little of such praise goes a long way in societies more democratic than that of Louis’s court – although it will be interesting to watch how it plays out among the courtiers currently being chosen to serve our notoriously thin-skinned, vain and vindictive new monarch-elect - and they might have interested Louis himself only a certain amount. Each of the featured works is barely 45-minutes in length. Holding them together, and filling them out, are two excerpts from “Atys,” a work by Jean-Baptiste Lully, the dominant opera composer of the time, who was far greater than either of the composers of the trifles. The excerpts made at least this listener wish that we were hearing that work in full.

Is this all too complicated? Well, don’t worry yourself trying to understand. The two divertissements were meant only to entertain, and they succeeded at that. Their music is charming, light and frivolous, and rhythmically sharp, just what you would imagine courtiers to whip up for a king who was defining absolute monarchy while he danced a light gavotte – Louis was a passionate dancer, and a figure representing him here shows his skill at terpsichorean expression. The last thing the two composers wanted was to exercise the audience’s mind.

To justify his cobbling together two bon-bons into something more serious than either ever intended to be, Blin wrote a scenario that stays close to the texts but in drawing them together creates a bigger picture. In themselves, the Charpentier piece is a comedy about court intrigues, the character representing Music being cut off and frustrated by the one representing Conversation. In the Lalande, the statues that punctuate Versailles’s vast gardens come to life at night.

Blin’s conceit is that “Atys” is the musical entertainment that emerges after Music and Conversation shut down their competition and reconcile in honor of Louis. And after the haunting, time-stopping aria from “Atys” sung by Sommeil (Sleep), the aged Louis falls asleep, only to dream of the statues in his garden coming to life. As dawn comes, the statues return to their stations on the gardens’ elaborate fountains.

It was all realized in high style, historically rooted in its time. As usual, costume designer Anna Watkins produced an ensemble of gorgeous costumes for the bewigged performers. Blin directed them in the correct, highly formalized posturing and gesturing that was the hallmark of 17th century French theater. And after working with him for many years, the performers capered and gestured with the articulate but unnatural moves of a Versailles courtier. Choreographer Carlos Fittante made dances that the singers mastered, and he himself, as Louis, joined the party in “Les Fontaines” showing the assembled how to do it.

High praise goes to the crack BEMF Chamber Ensemble, led by lutenists Paul O’Dette and Stephen Stubbs and concertmaster Robert Mealy, who flawlessly played the music of the French court with the lightness of texture and sparkling rhythms required.

But highest praise goes, as always with these productions, to the BEMF Vocal Ensemble, veterans as well as a number of new-comers who displayed an idiomatic understanding of the French Baroque style that suggests years of practice. In the three works, several of the singers play multiple roles, forming the chorus or having a line or two in one divertissement and then taking the lead in another, a democratic casting practice the BEMF has followed for the past few years. All deserve a shout-out, but a few really did dominate.

Of the two divertissements, Charpentier’s had the greatest drama, although by most standards these were profoundly undramatic works. In “Les Plaisirs,” soprano Mireille Asselin as La Musique and mezzo-soprano Mireille Lebel as La Conversation, both Canadians who have sung with the BEMF in the past, were at the center of the action. Engaging essentially in an extended bitch-fight, the garrulous Conversation interrupted the disciplined Music every time she tried to prepare her vocal gift to the King.

And the texts were as tart as any confrontation between Bette Davis and Joan Crawford. “Prattling deity, may/your tongue become so entangled between your teeth/That it forever loses the tiresome habit of ill-timed praise,” Music sings (in the translation by Blin) to Conversation, just one example of the insults flung. As Musique, Asselin sang with dignity and as Conversation the red-haired Lebel sang with fiery insouciance, both with beauty of tone.

To assuage the two warring goddesses, one of the courtiers calls on Comus, the god of feasts, who offers them hot chocolate, and then wine, jams and marzipan when that doesn’t work. BEMF regular baritone Jesse Blumberg sang with sonorous authority. Unsuccessful to stop the squabbles, Comus calls on Le Jeu, the god of games to offer them diversions. Cards, dice, billiards, checkers, chess all fail to do the trick and the goddesses keep up their bickering. As Games, Jason McStoots lights up the stage with his comedic talents, camping up the role without shame. One of the finest, if not the finest comedians in Baroque opera, McStoots also sings with a grainy but sweet and characterful tenor. As this goes on, the courtiers giggle among themselves and in one place have a wonderful laughing chorus. Finally, Music admits that the entire argument between her and Conversation was merely to entertain the King, who, impersonated by Fittante, has been sitting in a wheelchair in the midst of the proceedings.

The scene shifts to the evening’s entertainment, two excerpts from Lully’s “Atys,” Louis’s favorite opera. The music gets more serious, more complex and more beautiful. Indeed, the highlight of the entire program is the brief scene in which Sleep (sung by tenor Aaron Sheehan), Morpheus, the god of dreams (sung by McStoots), Phobetor, the god of nightmares (sung by baritone John Taylor Ward) and Phantase, who produces images of inanimate objects during sleep (sung by tenor Oliver Mercer) sing an intoxicating quartet that in Blin’s conceit brings sleep to the aged King. In a brief solo, Sheehan, the BEMF’s outstanding dramatic tenor, sang the aria “Dormons, dormons tous” (Sleep, sleep all) with a tonal beauty even greater than the singer on William Christie’s famous 1987 recording of the opera, which brought the long-neglected work back to international stages. Louis follows the god of Sleep’s advice and dozes off. The audience was tempted to do the same, not out of boredom but because Sheehan had cast a spell.

Anyway, Louis dreams that his statues come alive, and after the intermission, there was another divertissement. It was a delight, but I think we’ll leave it to the imagination. Dream like Louis what you desire.