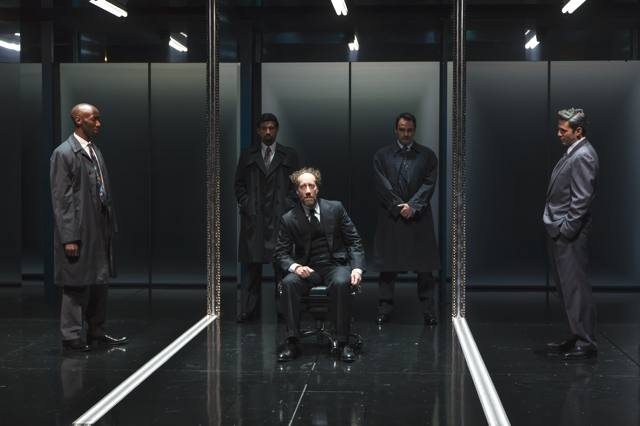 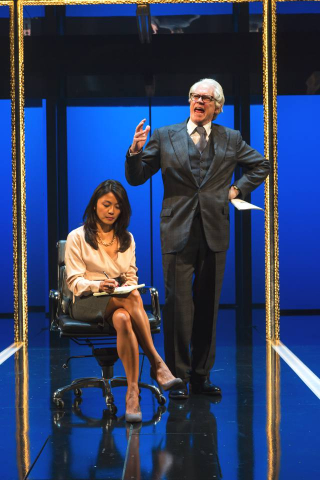 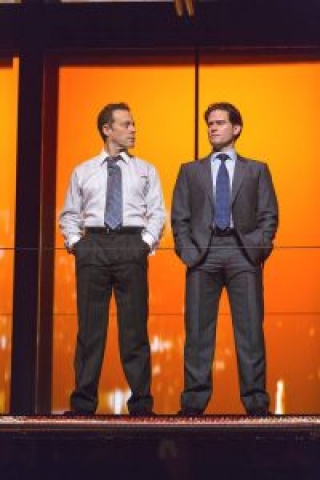 Pulitzer-prize winning playwright Ayad Akhtar, (“Disgraced”) highlights in his fictional play, set in 1985, what our current President claims he is doing or going to do when it comes to draining the Washington D.C. ‘swamp’ of insider trading, manipulators and financial sharks and lobbyists who roam the halls of Wall Street and Capitol Hill.

The ‘it’ is this case has a familiar ring to it.  In 2008, it was the crash of Wall Street that brought our economy to a near-paralyzing standstill. There was then as now, plenty of blame to go around.

Akhtar’s play, crisply directed by Doug Hughes, is a searing indictment of financial perfidy and recklessness and its seeming disdain for the rule of law when ‘it’ comes too close to getting in the way of the art of the all-important deal.  There are many echoes of both the 1987 Michael Douglas film “Greed”, whose mantra that ‘greed is good’ along with Martin Scorsese’s 2013 take on “The Wolf of Wall Street” where sharks and corporate raiders are seen behaving badly, is chillingly still alive and well.

The story, in short, revolves around a high-flying, risk-taking corporate raider Robert Merkin (Steven Pasquale in a potent performance).  Merkin is known as the King of junk bonds, and the author of the financial term “debt is an asset” concept which is always a key component in fashioning his multi-million deals.  He will do anything; sell out his partners, his life-long friends, and colleagues, even his family in his quest to become top-dog on Wall Street.

These top denizens who live in the shark tank have no loyalties or scruples. They are only interested in the pursuit of money. Lots of it.  Hundreds of millions of dollars are at stake. If the truth be known, these players don’t really need the money.  They have plenty. It’s the adrenaline rush that comes from deals dreamed up by these driven, craven, men and women in an effort to become the top dog that obsesses them. It boggles the mind of those of us who know very little about how the world of finance works and the numbers generated.  In the words of some “it’s complicated” … who knew?

The set design by John Lee Beatty is eye-catching, in that the ‘cyc’ becomes a gigantic replica of the stocks and bonds read-out board at NYSE.  The set is a series of all glass doors and a set of sliding platforms that neatly allow the cast of twenty-three talented performers to move in and out their various character locations that switch from Merkin’s office, home, and those of his team members, to his undercover/mole associates, to the offices and homes of his corporate take-over opponents. Each group having a place to discuss (for the audience) the tactics of deal-making and betrayal when it comes to one another in their quest for Wall Street domination.

According to playwright Akhtar, it’s not easy being a wheeler-dealer living in the pressure cooker environment that is Wall Street.  Not only is “JUNK” a hotbed of money- making, it’s also a place where sexual favors are exchanged for information and advantage, and again we’re ‘shocked to find out that gambling is going on’ at Wall Street and in broker offices. Aah, but there is always a price to be paid for the lack of honesty, decorum and marital infidelity, but no more spoiler alerts here.

Akhtar’s plot is intriguing, and his dialogue for his cast of solid actors has the ring of authenticity.  In large casts, there are always standouts. “JUNK” is no exception.  Sharp, solid, performances are rendered by Ito Aghayere as Jacqueline Blount, Michael Siberry, as Leo Tresler, Miriam Silverman as Amy Merkin, Joey Slotnick as Boris Pronsky, Rick Holmes as Thomas Everson, JR. Teresa Avia Lim as Judy Chen, Matthew Rauch as Israel Peterman.

The creative team led by director Hughes includes mood lighting by designer Ben Stanton that allows the audiences to see the costumes designed by Catherine Zuber and the on-stage projections of 59 Productions. If you are planning to be in NYC over the Holidays, consider catching a performance of this potent production.

“JUNK”, is a slick production loaded with terrific performances.  The show performs at the Vivian Beaumont Theater in Lincoln Center, New York City, through January 7, 2018