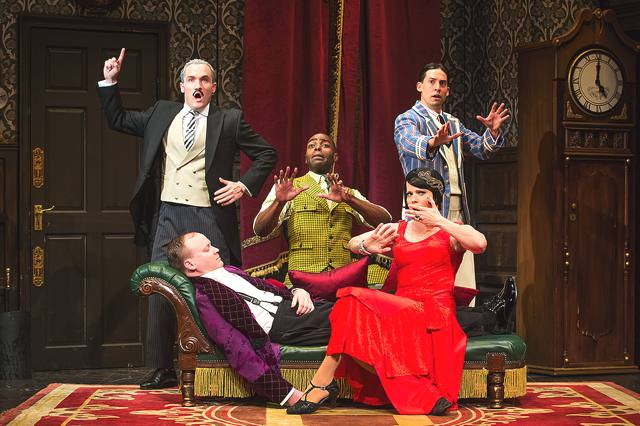 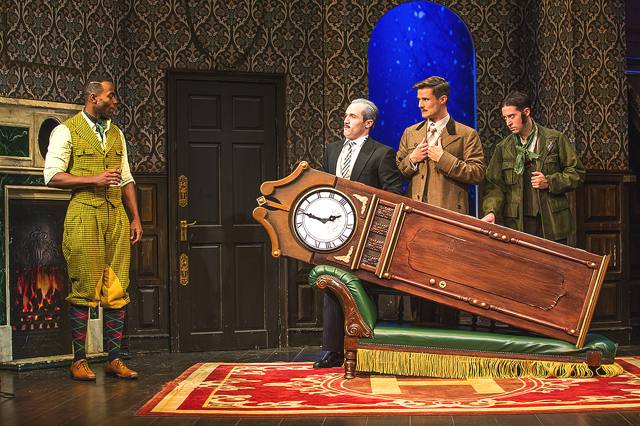 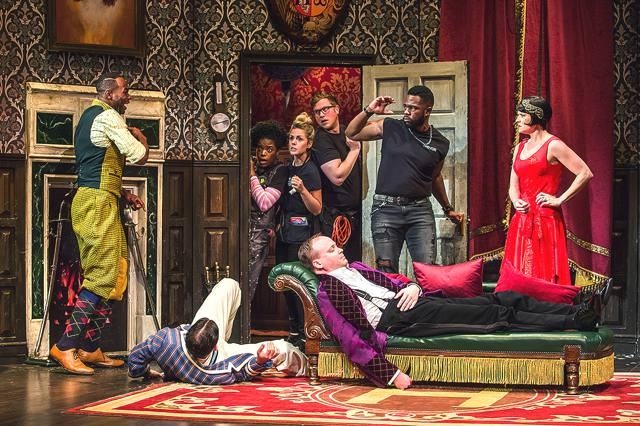 Most older theatre mavens and fans of a certain age will probably remember playwright George Kelly, and his 1936 satire/spoof “The Torch-Bearers”, a play about amateurs producing and performing in what we now call ‘community theatre’.

Fifty-six years later, British playwright Michael Frayn struck gold with his hilarious and highly entertaining farce “Noises Off”. The “play-within-a-play format also set in the world of theatre went on to become a huge hit, and the gold standard in comedy/farce in London’s West End, and on Broadway.

Now, arguably, the wildest and wackiest comedy/farce of them all is, once again, about ‘the world of theatre’ arriving in America in 2016 following a two-year run in London’s West End, where it won Best New Comedy at the 2015 Laurence Olivier Awards.

“The Play That Goes Wrong”, is written by three talented British playwright/actors: Henry Lewis, Jonathan Sayer, and Henry Shields, who are members of the London-based, Mischief Theatre Company. The current production now wowing New York audiences at the Lyceum Theatre on Broadway, features an all-American cast determined to solve “The Murder at Haversham Manor” is set in England on a dark and stormy night (is there any other kind night for A British mystery farce?), and once again this play also just happens to be a-play-within-a-play format. The whodunit mystery presented by the faux “Cornley University Drama Society” is now the comedy hit of the 2017 Broadway season.

Inventively directed by Mark Bell, this classic-style British farce must have auditioned every American actor in New York City who could muster a veddy British accent, and also understands the wild and frenetic farce genre that is so prevalent in many British comedies. Peter Sellers, Scottish actor Alastar Sim, Monty Python’s John Cleese, were all masters of the genre.  It should be noted that director Bell hit the jackpot with his American cast as well.

The two-level set designed by Nigel Hook is a deceptive and harmless looking creature that a first glance has all the visual trappings of an Agatha Christie play.  A large Manor House drawing room, large fireplace, tapestries, the family Coat of Arms, along with the obligatory painting of the family patriarch over the fireplace. In reality, the set becomes another ‘character’ in the production, which in itself alone, is worth the price of admission.

Once the onstage slap-stick mayhem begins, the laughs are infectious and nonstop.  “The Play That Goes Wrong” unfolds in a series of comedy scenes performed by the ‘amateur actors’ of the ‘University’s Drama Society’, as they struggle do their best to ‘remain in character’ despite loads of unexpected physical comedy sight gags, along with uncooperative props; sticky doors that won’t open, pictures that fall from the walls, and a host of miscues, and delayed entrances the whole ball of wax! It’s right out of Charlie Chaplin and Buster Keaton playbooks. And it’s hilarious.

The story, such as it is, follows the earnest but bumbling British police Detective Chris Bean (Mark Evans) in the ‘Play’ who’s desperately trying to solve the murder of Jonathan (Jonathan Fielding), as a corpse whose movements belies the designation ‘corpse’. The relatives and friends of Jonathan try to help detective Bean solve this dastardly deed, but to no avail.  Instead, the group of clumsy but well-intentioned relatives: Akron Watson as Trevor, Preston Truman Boyd as Robert, Harrison Unger as Dennis, Amelia McClain as Sandra, Alex Mandell as Max, and Ashley Bryant as Annie, are priceless in their attempts to ‘normalize’ the on-stage zaniness.

As a side note:  I had the good fortune at ATCA’s annual luncheon with Broadway actors at Sardis famous NYC restaurant two days later, to find myself being seated next to actor Ashley Bryant, who plays Annie. I politely leaned over and asked her if during the run have any of the cast sustained any injuries as a result of all the physical comedy taking place on stage?  Ms. Bryant replied, “Not any serious injuries like broken bones, but we’ve all had our bruises, and a few aches and pains from doing a physical show like ‘Play’ eight performances a week for almost six months.  But it’s labor of love for actors.”   The production is just too funny and entertaining to spoil the experience for those who want to see it.  So, no spoiler alerts from me.

In the technical department the award-winning set design by Nigel Hook is a work of mechanical miracles that allow the actors to perform in his topsy-turvy world of Haversham Manor, without missing a beat. The lighting design by Ric Mountjoy, neatly compliment the costumes by Robert Surace.  Sound design by Andrew Johnson, and original music by Rob Falconer, complete the creative team.

“The Play That Goes Wrong” is the perfect gift for Anglophiles and theatre-goers over the Holidays. It performs at the Lyceum Theatre on Broadway and performs as an open-ended run.  However, I wouldn’t wait.  I would buy my tickets right now if you’re planning on being in New York over the Holidays.