War at the New York Philharmonic 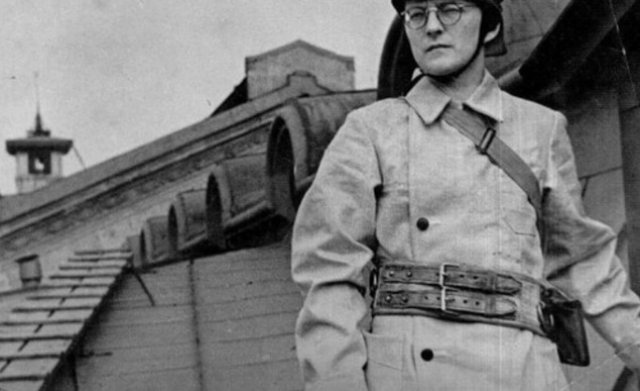 Britten and Shostakovich at the New York Phlharmonic Shostakvich at City Fire Marshall is pictured.

The extraordinary history of the Second World War casts a long shadow on any art music written in Europe in the 1930s and '40s. This week, the New York Philharmonic paired two of these works in a program of extraordinary intensity under music director Jaap van Zweden: a program that seemed to ask the following. Can art music, created under the shadow of extraordinary political and human event, somehow manage to transcend its origins and remain relevant to the audiences of today?

Judging from the performances that orchestra and conductor delivered at Friday's matinée, the answer is...maybe. This concert opened with Benjamin Britten's knotty Violin Concerto and the New York Philharmonic debut of simone Lamsma, a Dutch musician and a protégée of van Zweden. This willowy soloist took on the grim challenges of the Britten work, a concerto that requires musicianship, features great emotion but does not reward the soloist with the usual gifts associated with this genre.
It opens with percussion, a tapped theme on the timpani that sets the grim tenor of what's to come. This is music written in 1938, as Europe teetered on the brink of another bloody war. Ms. Lamsma's dark, wailing solos seem to yearn for a more peaceful world. Britten's writing is determinedly unorthodox. He has violinist and orchestra trade places in the first movement recapitulation and ending the work with a long and ultimately unresolved passacaglia that obsesses over a tiny amount of musical material with maddening slowness.

If the Britten work anticipates the madness of war, Dmitri Shostakovich's Symphony No. 7 in D minor (known since its premiere as the "Leningrad") is a report from the front lines. Shostakovich's work is a brutal and ironic account from the Russian front. The composer and his family were virtual prisoners in the besieged city of Leningrad for the first part of the three-year siege of that city. Eventually, they were smuggled eastward, and the work had its premiere with the composer safely away from the war.

The Seventh was then played in Leningrad by the bedraggled survivors of the city's orchestras, and smuggled to the West (on microfilm) to Iran. There, it arrived on stages in London and eventually New York, where Arturo Toscanini conducted the New York Philharmonic in the U.S. premiere at a packed Radio City Music Hall. There is no question that the Seventh is an extraordinary documentation of Russian resistance and a masterpiece of musical propaganda. And yet with all that history, one must ask: is this work any good?

This is a very long symphony, dominated by the middle part of the first movement. Here the composer indulges in twelve repetitions of a chirpy theme from Léhar's The Merry Widow (a particular favorite of Adolf Hitler's), slowly increasing the orchestral forces playing it in a crescendo that evokes the slow tread of an advancing army. The orchestral forces then literally do battle, with "German" and "Russian" themes duelling in the brass and the whole ending in a slow and chilling requiem for the dead of the city. The rat-a-tat rhythm of the machine guns comes back in the coda, a hint that menace still lurks in the movements to come.

For this performance, van Zweden divided his brass forces, splitting them to stage left and stage right, allowing for an antiphonal effect of shattering power. One, two and eventually three snare-drummers beat a tattoo, and the work marched right up into the listener's space, thrusting forward with terrifying energy. The shell of sound burst in the battle sequence, with the separated brass playing with clarity and great precision. The work then lurched into a twisted scherzo, what sounded like a folk tune that metastasized, briefly into terrifying circus music. This was played with laser-like precision and emotion from the orchestra, responding to each turn and lurch with brutal force, delicately applied.

The assault did not let up. Even the slow movement, sought by listeners as a traditional haven of serenity in a work such as this offers passages of stark terror, building a wall of brass and winds to a series of discordant climaxes. The finale offers martial triumph of the Russian themes from the first movement, but there is no sunny resolution to be found. An assault by timpani and brass introduces a slow moderato passage, building in gradual power and volume but offering little in the way of comfort to the battered listeners.

In this performance, van Zweden and his players succeeded in that most difficult of goals, separating the causes of this work from its effects and rendering the Leningrad Symphony as a work of music as well as a document of living history. It was a noble achievement.  (Reprinted by permission from Superconductor).