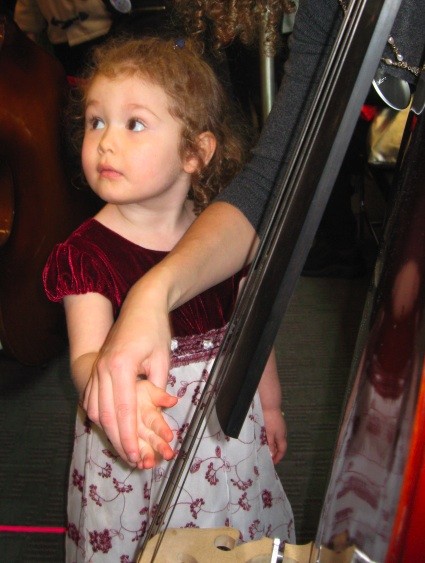 The cello is very big when you are three. 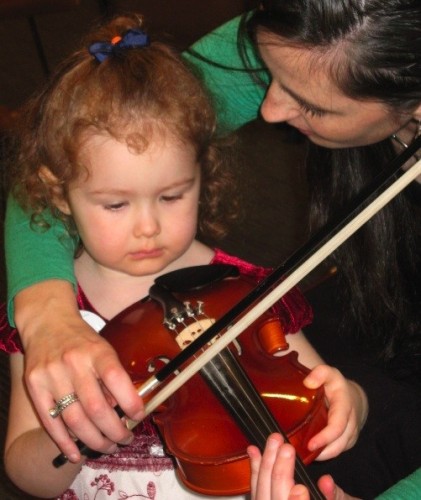 But the violin fits perfectly. "I can play!"

The New York Philharmonic hosted very young people at a concert in Merkin Hall.  Strings were the subject this afternoon.  Other programs will introduce the woodwinds and brass.

The warm up was a roam through the hall and stage, chatting with the musicians, listening to the sound of the different instruments from a growling bass to a violin almost screeching near the bridge.  While composer Theodore Wiprud, who arranged a delightful version of “Pop Goes the Weasel”  to introduce the different approaches the finger and the bow can take to a string, did not feel the youngsters swarming across the stage and on the balcony was working well, the kids were in a paradise of instruments and bows. They pressed their noses against the instruments' bodies as though they were pet store windows.

Alert to gongs announcing the beginning of the program, kids tore downstairs to tuck into their seats and wonder why a stuffed penguin sat in his very own multi-colored rocking chair on stage, no instrument in foot.

Bizet is a smart choice for anyone beginning to listen to music, because he is irresistible.  Kids joined in to clap to the beat.  No one sang a version of the toreador’s song I remember vividly hearing as a child:  “Toreador-a, don’t spit on the floor’a; spit in the cuspidor-a, that’s what it’s for-a.”   But fun was the spirit of the afternoon.

That the bow is made of horse hair became clear when host Rebecca Young detached the hairs from one end of the bow, and waved them like a horse's tail.  "No animals were harmed etcetera", Young intoned in an authoritative voice.

Pop Goes the Weasel provided each instrument with a solo so the kids could get a sense of the range and texture of the different string instruments.  The harsh tones of string bowed on the violin near the bridge were clear.

What’s the difference in texture between a bowed and plucked string?   We could hear bowing versus plucking clearly.  And the pizzicatos, later to be displayed in the Britten, charged the kids to bounce in their seats.  Tremulos rolled out.  The prospect of striking the bow against the instrument thrilled.

Dorian Rence, a violist when she is not writing and narrating stories to the musician’s accompaniment, put together a trio of Mother Goose rhymes to accompany an early Britten symphonic piece.  Marion Schoevaert's delightful illustrations which were projected in back of the musicians. A penguin was featured in the art.

The Hey Diddle, Diddle cow who covered the earth with milk; Puss 'n Boots and finally Humpty Dumpty were perfect companions to the Penguin and the kids.

At the concert's conclusion, the kids were invited to perform on instruments. Everyone wanted to try spiccato.  The word sounds great and the prospect of bouncing a bow on a string enticed.

Annabelle,my young companion, wanted to head right up to a violin, but started on the intimidating bass.  Up the stairs to the cello, twice as tall as she is, but not the least threatening after her introduction.  The violin at last.  She tucked it under her chin, and took up the bow.  Finally a Suzuki violin found a perfect fit and capped off a perfect afternoon.

Annabelle reported her musical accomplishments to everyone she met afterwards. She has signed up for the woodwinds and the brass.  How will she ever choose?  A nice dilemma to contemplate.