Puff: Believe It or Not at Remy Bumppo Theatre 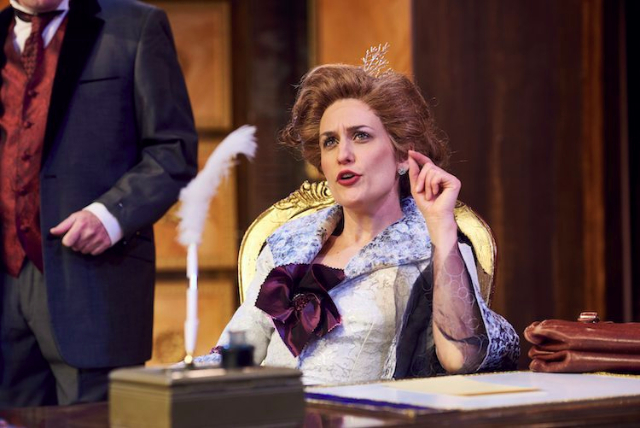 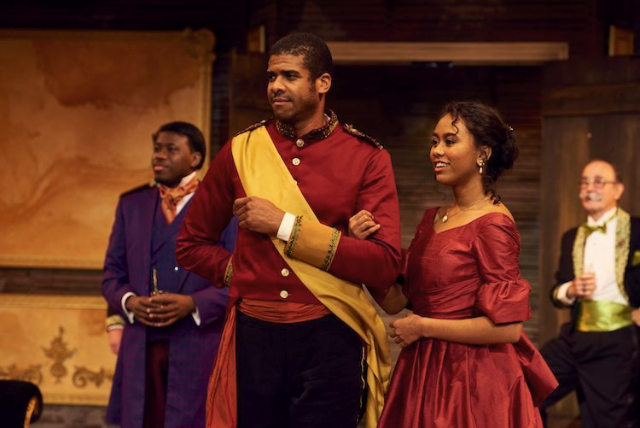 Geffrard as Maxence, Moaney as Albert and Walker as Antonia. Photos by Nathanael Filbert 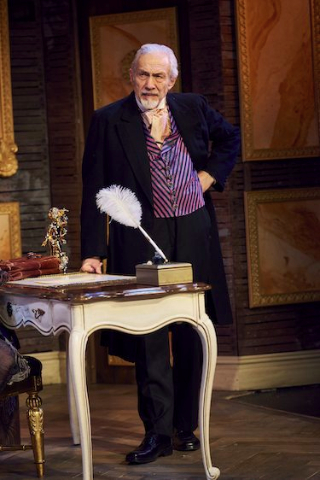 Puff: Believe It or Not by Remy Bumppo Theatre is a smart, funny poke in the eye of the contemporary affection for fake news and hype about nothing, set in an 1840s Parisian drawing room. The character who is a stand-in for our moral outrage is Albert d’Angremont, a cavalry officer recently returned from five years in . He’s played with considerable dash and charm by Joshua Moaney.

Puff is a world premiere translation by Ranjit Bolt of the original script by the prolific French playwright, Eugène Scribe, known for his complex plotting of the well-made play. With Nick Sandys’ capable direction, the actors keep who-knows-what-and-loves-whom-when mostly straight. And Albert, with an occasional wink and aside to the audience, contributes.

Veteran actor David Darlow, as the millionaire/miser César Desgaudets, explains puff early in the play. He tells Albert, who is appalled at the lack of veracity in French newspapers: “You seem to be the only person who hasn’t found out that in this whole, gigantic metropolis, there isn’t a word of truth to be had. Puff is king, my boy. Puff and publicity.“

He continues, “Puff [is] the art of promulgating, for financial gain, that which … isn’t exactly so. It’s lying carried to the level of speculation, for the greater good of society and the capitalist system. The rhapsodizing of poets; the posturing of politicians; the merchant hawking his wares; the minister threatening to resign; the industrialist touting his latest venture; the stockbroker peddling his new share-offering … they’re all just different types of puff.”

The plot involves Albert’s love for Desgaudets’ ward, Antonia (Netta Walker), who also loves him, but is pledged by her guardian to marry the Comte de Marignan (Christopher Sheard), who is really in love with Desgaudets’ outspoken literary daughter, Corinne (Kelsey Brennan), and she with him. Maxence de la Roche-Bernard (Gregory Geffrard) is Antonia’s brother, a businessman and financier whose risky decisions have gotten him deeply in debt. He’s hopeful about “a new railway consortium… The options to buy shares are going like hot cakes.” Or Antonia’s share of the family estate could help him get out of debt. And then there’s the matter of the provenance of De Marignan’s new volume of the history of , volume 2, the Algerian war. The count hopes it will get him voted into the Académie Française.

That’s enough of a plot summary. The 2.5 hour play breezes along, the dialogue is witty and modern, and the entire cast is outstanding. Mornay as Albert and Brennan as Corinne are particularly strong. She is outrageously cheeky and sophisticated as the Parisian woman of the salon. as Antonia is adorable and admirably handles emotions from sorrow to joy. Geffrard as Maxence is a Parisian Wall Street wizard (but has a little too much finance jargon to handle).

Scenic design by Joe Schermoly and slick stage management by Dana M. Nestrick and the crew result in the publishing office turning into the miser’s shabby drawing room and then into De Marignan’s elegant black and gold salon. Rachel Lambert’s costumes turn the men into peacocks (especially Maxence and the count) and the women into fashionistas. Corinne’s act two costume of black silk trousers with a lace overcoat is particularly striking.

Playwright Scribe wrote libretti for many composers that were performed at the Paris Opera (where a street is named for him). He wrote more than 400 works collected after his 1861 death in 76 volumes. He worked with many assistants (his “factory”) who wrote parts of each work.

The two friends with whom I saw Puff: Believe It or Not were delighted to have a useful new word in “puff.” But as a former journalist and corporate PR manager, the word was very familiar. What does a journalist call an article that is not factual? A puff piece. Puffery has always been a word for hype, promotion, press agentry. And so I plead guilty for my career sins in shading the truth or (more often) telling only half the story. That’s puff.