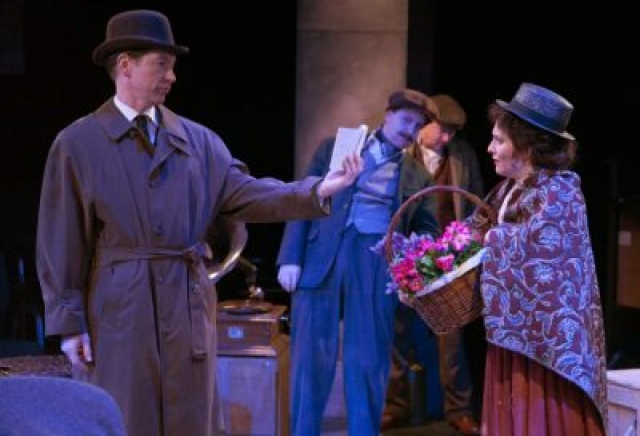 Director Shawn Douglass makes sure we capture every word of the linguistic interplay in scenes where Henry Higgins (Nick Sandys) practices the “science of speech” and “phonetics.” Like the opening scene in Covent Garden, where Higgins tells the flower girl Eliza (Kelsey Brennan) and every other participant his or her place of birth once he hears a few spoken words.

Queried by a gentleman bystander (Colonel Pickering, played by Peter A. Davis), Higgins identifies him as “Cheltenham, Harrow, Cambridge, and India.” Higgins says: “You can spot an Irishman or a Yorkshireman by his brogue. I can place any man within six miles. I can place him within two miles in London. Sometimes within two streets.”

And thus we are introduced to Higgins’ career specialty: Teaching someone from somewhere like Kentish Town to speak as if he was from Park Lane, and changing the course of his life. Eliza is inspired to learn to speak like a lady so she can get a proper job in a shop, rather than selling flowers on Tottenham Court Road. She seeks out Higgins and demands that he teach her, insisting that she can pay for her lessons. Higgins and Pickering, now in partnership, decide to take her on and prepare her for the ambassador’s garden party and fancy balls. The scenes of Higgins tutoring Eliza (which you might remember from the musical version, My Fair Lady) are here represented by recorded lessons echoing from a Victrola.

With subtle changes, Remy Bumppo’s production makes Pygmalion into Eliza’s story. She’s a modern woman determined to better herself. She knows she has a future only if she can learn to speak and behave like a lady. And once she learns this, she wants more. She rightly wants to know what is to become of her now. How can she take care of herself?

Remy Bumppo uses Shaw’s original script but adds some mid-century touches and a new character—an older version of Eliza, named Elizabeth, personified by Jane deLaubenfels. Elizabeth appears at beginning, middle and end of the play to honor the memory of what took place in the boxed-up rooms that used to be Higgins’ “laboratory” on Wimpole Street.

Sound designer Christopher Kriz uses mid-century pop songs emanating from a period radio, to signal the timing of Elizabeth’s mostly silent appearances. The music, her businesslike 1950s skirted suit, and her resemblance to young Eliza are our clues about what became of the Covent Garden flower girl.

Our recollections of Lerner and Loewe’s My Fair Lady, the 1956 musical version of Pygmalion, are nudged in every scene. We hear the Shaw dialogue that inspired songs like “The Rain in Spain,” “Get Me to the Church on Time” and “I’ve Grown Accustomed to Her Face.” But seeing the real Shaw script performed so beautifully makes you appreciate the quality of GBS’ writing once again. Pygmalion stands on its own as a brilliant piece of theater—both comedy and drama—with no need for musical accoutrements.

Douglass has a remarkable cast to work with. Sandys and Davis are consummate performers whose every tone and action are right. Brennan is excellent as the ambitious flower girl, as she learns to be a lady, carefully aspirating her “h’s,” and as Higgins’ glamorous almost-finished project. David Darlow as Alfred Doolittle has two delightful turns as Eliza’s father. First, the dustman visits Higgins, seeking to benefit from his daughter’s new situation. And later, he arrives in top hat and tails as the about-to-be bridegroom who has come into some money (three thousand a year!) as a result of Higgins’ casual recommendation to an American philanthropist.

Annabel Armour as Henry’s mother, Mrs. Higgins, comports herself as an elegant English lady but also, in the end, protects Eliza from her sometimes overbearing son. Mrs. Pearce (Laurie Larson), Higgins’ housekeeper, is properly helpful and outspoken when needed.

The simple set designed by Jacqueline and Richard Penrod makes full use of the upstairs main stage at Greenhouse Theater Center. This production is staged in the round with actors entering and exiting stage left and right. Two crew members, dressed in moving company uniforms, are semi-characters, moving the scenery, but uncredited in the playbill. They move furniture in out and rearrange it to suggest Higgins’ lodging and his mother’s drawing room in Chelsea.

The women’s costumes are exquisitely designed by Kristy Leigh Hall.

Irish-born Shaw (he preferred to be known as Bernard Shaw) lived in London for most of his life. He was a political activist, a socialist and a member of the Fabian Society. He wrote more than 60 plays and was awarded the Nobel Prize in Literature in 1925.

Pygmalion by Remy Bumppo Theatre continues at the Greenhouse Theater Center, 2257 N. Lincoln, through January 8. Performances are Thursday-Sunday plus several Wednesday performances. Tickets for $42.50 to $52.50 are on sale online or by calling 773-404-7336.