Tom Wahl in Act of God 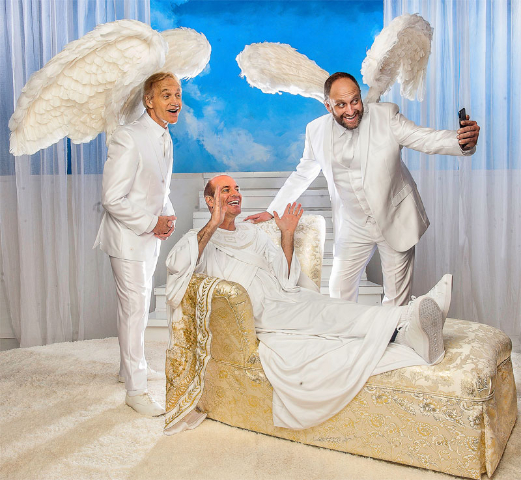 - God, resplendent in a pristine white robe, enters the stage behind a smoke-like effect and flashes a smile as bright as the sky-blue backdrop with white clouds behind him.

It’s not Jesus who graces our presence, but the Almighty who, in the beginning, created the heavens and the Earth.

Carbonell Award-winning actor Tom Wahl portrays the Lord in GableStage’s funny, engaging production of “An Act of God,” which is on-stage through Dec. 18 as the company’s first 2016-17 production.

The play, fresh off a recent Broadway run, is presented as kind of a game show, with co-hosts, angels Michael and Gabriel, unveiling a revised set of Ten Commandments and God fielding questions from the audience.

It’s not clear whether audience members were chosen ahead of time to ask scripted questions. So if you aren’t into participatory theater, you might choose a seat in the back.

The play is a faithful adaptation of comedy writer David Javerbaum’s dryly witty book “An Act of God,” previously published as “The Last Testament: A Memoir by God.”

Javerbaum, you may recall, is an 11-time Emmy award winner who, among other things, served as a writer for “The Late Show with David Letterman.”

Devout believers might find parts of Javerbaum’s play blasphemous. Others will likely laugh at the comic material, some of it sarcastic, some of it outrageous in the vein of Mel Brooks and “The Book of Mormon.” Comedic delights include God talking on a cell phone and posing for a “selfie” with his angelic partners.

With the help of those beings, God covers everything from what he really instructed Noah to bring on board the Ark to escape the flood to a revised set of Ten Commandments.

“I’m growing weary of it,” the creator of all things tells us about the existing set. He’s become tired of the set “like Don McLean grew weary of American Pie.”

The commandments aren’t all new. “I am the Lord Thy God; thou shalt have no other Gods but me” wasn’t axed.

“That one’s a holdover but still applies,” a folksy Wahl, inhabiting God, tells us.

We all know about “honoring thy father and mother” but what about honoring our children?

Specifically, the time has come to honor his son. God has some good things and, well, not so good things to say about Jesus. One of the comments in the latter category is where the really devout might think Javerbaum has taken his humor too far.

But God isn’t too easy on himself, either.

“I hurt and kill for the most ridiculous and tangential reasons,” he notes. “I have wrath management issues. There is something seriously wrong with me.”

He provides an answer as to why bad things happen to good people. However, some may find the answer too simplistic.

Javerbaum has some fun with people with a strong connection to God.

“I’m not blessing you anymore, so stop asking,” he says. As a further suggestion that mortals and the almighty might be too close, God has come up with a new commandment: “Thou shalt not seek a personal relationship with me.”

He still doesn’t want his name taken in vain.

“It cheapens the brand,” God explains.

And for heaven’s sake, don’t invoke his name when you’re playing sports or engaged in competition. He’s not likely to provide divine intervention, because quite frankly, he doesn’t care who wins and loses.

From Javerbaum’s writing, we’re led to believe God is somewhat egotistical. But at least he’s willing to own up to some of his faults.

He’s a bit of a vulgar one, too, but there’s a soft side to the man upstairs.

Let the record be set straight: God never told Noah to bring two of every kind of animal onto the Ark. He simply asked him to bring aboard two puppies. After all, who wouldn’t want to bring a soft, cuddly pet on a treacherous journey? So bring those “cutie patuties” on board, God told Noah.

As skillfully played by Wahl, God comes across as somewhat annoyed and condescending toward man but also encouraging and empowering.

Wahl stands upright, tall and proud and in command, but speaks in a human tone. The award-winning actor transitions seamlessly from one demeanor to the next.

While explaining what God did on “Day 2” of the world’s creation, Wahl takes on a tone as informal as a guy having a beer with a buddy while watching a football game.

During another moment, God stands straight, annoyed and is obviously trying to keep his composure. He’s taking criticism from the annoying angel Michael…and he’s not taking it very well, blinking his eyes, maintaining a straight face -- basically looking like a proud presidential contender during a debate enduring what he feels are lies about him.

Sound/music designer Matt Corey has created some lightning-like special effects for the angels. But neither Kevin Reilly as Gabriel nor Gregg Weiner as Michael portray them as otherworldly beings.

Weiner’s Michael is more subtle and matter-of-fact, except when he gives God a tongue-lashing in a raised, intense tone of voice, which doesn’t sound forced.

The all-white, immaculate suits worn by the angels contain oversized wings that are visually striking. The equally pure white robe worn by the almighty is an outfit that befits, well, God (even if he is imperfect in the play).

Baskin’s gorgeous set resembles something you’d see at a wedding. It comprises a white, ornate curtain and a staircase leading to a backdrop of a clear-blue sky complete with white clouds. Descend from the “sky,” and you’ll find a round platform with a luxurious couch next to a wine glass and pitcher. Pillars representing the Ten Commandments stand on either side of the set.