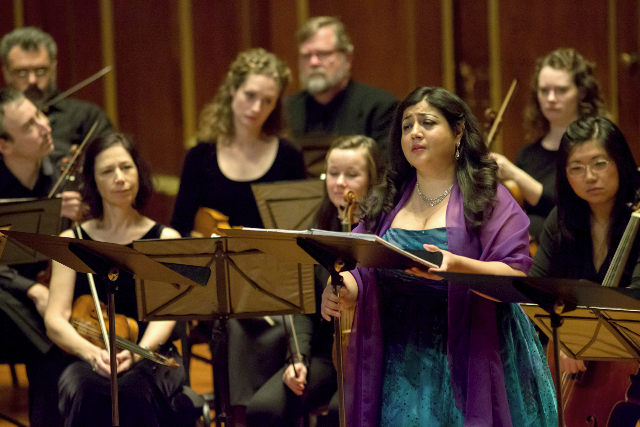 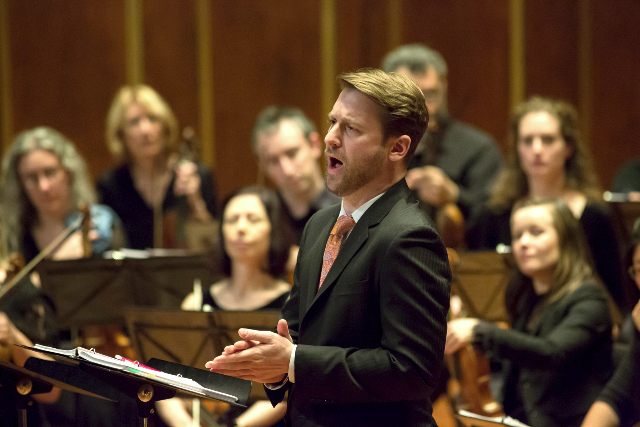 Jesse Blumberg sang the role of Raymondo, the King of Mauretania. 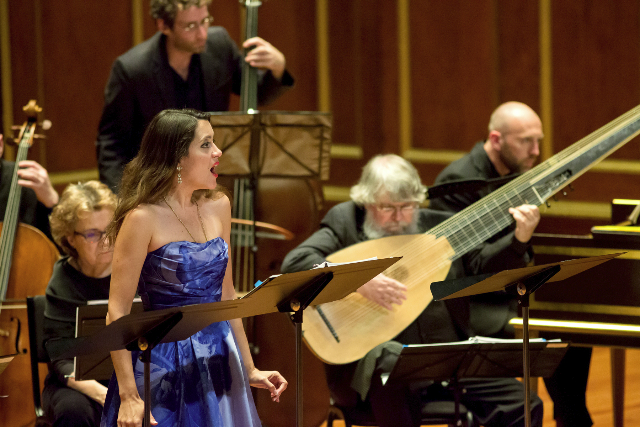 Sometimes it is better the second time. Or in a slightly different form. Those who endure the traditional Thanksgiving feast in order to gorge on turkey sandwiches with stuffing and cranberry sauce during the following days know that.

It’s also true in opera, especially rare or obscure operas you’re hearing for the first time. There’s so much to take in on a first hearing – the story, the production, the music, the performances, all new, all unfamiliar. A few years ago during its annual Thanksgiving weekend of semi-staged chamber opera, the BEMF put on a production of Marc-Antoine Charpentier’s “La Descente d’Orphée aux Enfers” mashed up with his “La Couronne de Fleurs,” both of which abound in characters, gods and goddesses out of mythology attended to by nymphs and shepherds. Dutiful critic that I am, I sat making notes about who was who and what they were saying and doing. By the end I realized that it really didn’t matter all that much, that the operas, especially “La Couronne de Fleurs,” were meant as entertainments in praise of the King. I had sacrificed enjoyment for getting the facts straight. When the festival brought back the production a year or so later I was able to sit back and enjoy the gorgeous singing and production, thoughts of finding some deeper meaning that did not exist – unless one was a 17th century French scholar - out of my head.

Similarly, the BEMF’s repeat this Thanksgiving weekend of Handel’s first opera, “Almira,” written for the Hamburg opera when he was 19 years old, gave me an opportunity to enjoy it in a way I hadn’t when it premiered in 2013.

At that time, I again focused on figuring out what was going on, trying to make sense of the illogical and convoluted plot – who was that third court lady? What purpose did the emissary from Mauretania serve other to marry one of the principals – or was that enough? The 2013 production was fully staged, so there were all the factors that go into a staging to come to terms with – costumes, sets, stage direction, acting, lighting – and there were two ballets. It all came in at nearly four hours, enough to exhaust anyone. (Is it any wonder that people fall asleep at opera? It’s not as the popular imagination would have it that they’re bored – it’s that they’re exhausted trying to take it all in.)

In general I am not a fan of concert opera – opera is a work of drama meant to be staged – and I had thought that a concert version of the work I had seen fully staged only a few years ago, not even a semi-staging of the sort the BEMF excels at, would be a let-down, a disappointment in comparison. The opposite turns out to have been the case. The concert version put the focus on the music, at which the 19-year old Handel was precociously skilled. The silliness and inconsequentiality of the drama, which was highlighted in the full staging, was easy to overlook. Handel had inherited the libretto, preposterous even by preposterous opera libretto standards, when the composer originally commissioned to write the opera skipped town, leaving the company with a libretto but no composer. An ambitious youngster in the orchestra, Handel stepped up, wrote a successful work for the stage without much experience, and the rest is history.

In a smart move, the BEMF decided that since the opera was not being staged to cut the ballet music, which brought the concert to an end in only a little more than three hours. (It’s a move one wishes Gil Rose had made earlier this season in his concert performance of Tchaikovsky’s “The Maid of Orleans,” which did go on to nearly hit the four-hour mark.)

Even though the libretto was a burden, Handel, even at that early stage of his career, was able to find opportunities to let his melodic and dramatic talents flow. The opera is no masterpiece, but it does include some masterful arias. It is quite astonishing to think that one composing an opera for the first time could come up with two arias, “Proverai” and “Geloso momento,” one for each of competing sopranos, that equal the very best in his long career. (He composed some 40 operas.)

“Proverai,” is a revenge aria, sung by Edilia, a Princess at the court of Castile, when she learns that her feckless and faithless betrothed has rejected her for an opportunity to marry Almira, the Queen. “You will see with what fierce arrows/A woman’s wrath arms itself/And how soon her nobility can take revenge…” Amanda Forsythe, the reigning diva of Boston’s early music scene, who took the role in 2013, sang with such fiery passion that you feared that she might burn up the entire stage, all the while producing music of tonal plushness and impeccable ornamentation.

Coming only a few minutes later, “Geloso tormento,” sung by Almira, who has just learned that she must marry by terms of her father’s will a son of his faithful counselor Consalvo, is a passionate statement of the jealousy Almira feels when she suspects, falsely, that her secret beloved, Fernando, is in love with Edilia, not her. “The torment of jealousy is gnawing at my heart,” she sings, “dying of jealousy/is the worst way to die.” The orchestral writing, which is remarkably sophisticated and supportive of the emotion expressed, opens with a plaintive melody by the oboe, followed by a forte attack of strings playing in unison that underscores Almira’s passion. Sherezade Panthaki, a newcomer for the festival we hope to hear here again soon, sang the aria with a full palette of tonal color and expert interpretive skills. In the da capo repeat of the first theme, Panthaki mined the passion inherent in the aria for all it was worth.

A couple of things: Both arias are in Italian, but the opera, particularly its recitatives, is primarily in German. Such hybrids were common at the time, where the local vernacular was seen as OK to further the plot but that expressions of feeling were best sung in Italian. And the other is that these two arias, two of the best in the entire work, occur in the first half of the first act. It’s as if Handel himself lost interest as the plot grows increasingly complicated, creating less attractive emotional situations for him to set.

Forsythe and Panthaki were the two stars of the afternoon, and they played their parts as dueling sopranos to the hilt – in my judgment, it ended in a tie. But they were joined by a cast of evenly matched singers, several of them reprising their roles from the 2013 production, which is what helped make it such a hit. And, of course, the crack BEMF Orchestra led by concertmaster Robert Mealy delivered a fleet performance fall of spunk and color.

As Fernando, the man secretly in love with Almira, who is secretly in love with him – their problems are based in the fact that Fernando is an orphan with no social standing - tenor Colin Balzer was fine as he always is, although I find his voice and acting too bland in general. Considering his unstable position – it is later revealed in one of the most preposterous development in the opera, that he is a lost son of Consalvo and thus able to marry Almira – he has a couple of arias of a reflective nature. In the third act, imprisoned, expecting to be executed, Balzer delivered a moving monologue and aria addressing the fickleness of fate, resolving to love Almira to the death even though it is she who ordered his execution.

Returning in the role of Osman, the son of Consalvo who first tries to woo Almira, throwing his betrothed Edilia into a tizzy, tenor Zachary Wilder sang the role of a disloyal, cowardly opportunist with a light and sweet voice but appropriate wimpiness. And returning as Consalvo, Christian Immler’s manly vitality undercut his role as a lecherous old man. (This is a role where costuming would have helped define character.) Trying to seduce Bellante, that third lady, he sings, “…even if Etna is covered with snow/It still burns with an inner flame.” A festival regular, Immler sang in a flexible baritone that was able to effortlessly hit high notes along with the low with his usual clear enunciation of the text.

Teresa Wakim, a company regular who was taking the role of Bellante for the first time, pleaded a bad cold, but her pleasant soprano seemed to be in fine shape in a somewhat thankless role. As Raymondo, that mysterious emissary from Mauretania who turns out – no surprise – to be its king, Armie Hammer-lookalike Jesse Blumberg was also stepping into the role for the first time. He used his light baritone to make the most out of a schematic role. In the end he ends up getting married to that spitfire Edilia – it’s too bad Handel didn’t get to write a domestic opera based on their married life, but he got out of Hamburg as fast as he could, heading to Rome and then London, where he fully came into his genius.

Oh, I forgot one character! That would be Tabarco, the obligatory comic servant in baroque opera, here manservant to Fernando. Tenor Jan Kobow, like Immler a German import, was also a first-timer in the role. A veteran comedian, Kobow spoke more than sang his role, which was quite effective. Wearing a red suit in contrast to the other men’s black, he delivered a droll performance. In the madrigal-like aria that ended the second act, a standard set piece of the servant lamenting the drudgery of their job like Despina envying the chocolate she’s whipping up for her ladies and not getting to enjoy herself in Mozart’s “Cosi fan tutte,” he was both funny and sympathetic. However, he didn’t wipe out memories of local tenor Jason McStoots, who in 2013 gave the character a more slapstick interpretation, playing it like Larry from The Three Stooges. Like so many comic roles, Tabarco allows both approaches.

“Almira” was a deviation from the BEMF’s practice of semi-staging a short opera during Thanksgiving weekend. The company used the opportunity this year to essentially rehearse the work for a January recording session in Bremen, Germany, with a slightly different cast, where it will also be given a public performance.

Next season, however, the festival will return to its well-established pattern. In what sounds like an exciting presentation, it will produce “Alcina” – not the popular Handel opera, but a shorter work fully titled, “La liberazione di Ruggiero dall’isola d’Alcina.” What makes it exciting is that it is by a female composer, Francesca Caccini, who was a popular figure, both as a composer and performer, at the Medici court in Florence. According to Wikipedia, Caccini composed some 16 works for theater, of which “Alcina,” the first opera composed by a woman, is the only one that survives. Save the dates Nov. 24&25, 2018.